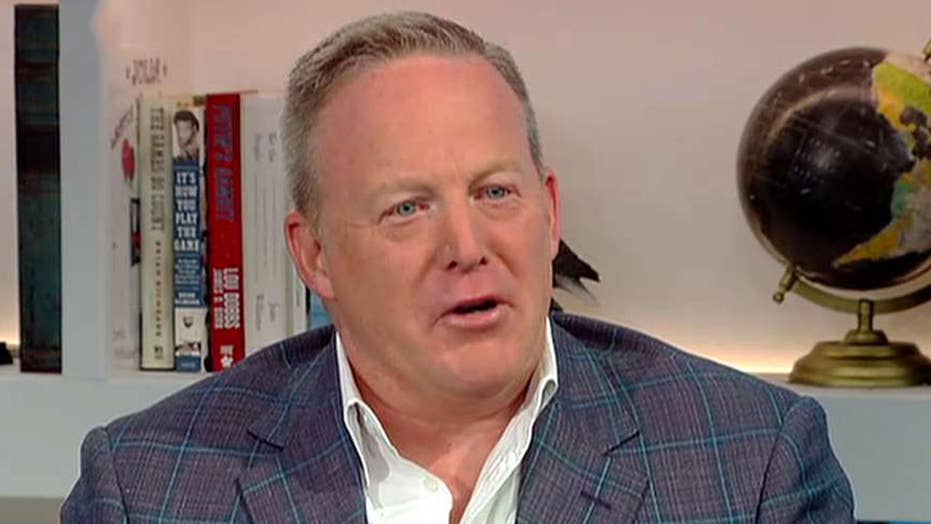 “Dancing With the Stars” co-host Tom Bergeron and some ABC staffers are outraged that former White House Press Secretary Sean Spicer has been invited to participate in the popular show’s 28th season that begins next month.

Bergeron tweeted that he disagreed with the decision to invite Spicer to appear on the show because he hoped the dance competition “would be a joyful respite from our exhausting political climate and free of inevitably divisive bookings from ANY party affiliations.”

An unidentified ABC employee was quoted in news reports as saying: "It's a slap in the face to those of us who had to deal with his baloney and the consequences of the ongoing lies and disinformation campaign at the White House."

TRUMP SPEAKS OUT ON SEAN SPICER JOINING 'DANCING WITH THE STARS': 'HE WILL DO GREAT'

Setting aside the fact that the decision to include Spicer has already accomplished its primary public relations objective – elicit gobs of free earned media to boost ratings of the TV show – the acuteness of the indignation from the offended, while somewhat predictable and downright baseless, is nonetheless wildly disproportionate.

Why and how so?

For starters, retired NFL star Ray Lewis will also be joining the star-studded cast in September. As you may recall, the former Baltimore Ravens linebacker was indicted on murder and assault charges in 2000.

In exchange for testifying against the men he was with that night, the murder charges were dropped and Lewis wound up pleading guilty to a lesser charge. He was sentenced to probation for one year.

Former NBA player Lamar Odom will also be joining the ensemble cast. Following a successful career that included several championships, Odom suffered a series of personal meltdowns involving drugs and alcohol. In 2015 he was discovered unconscious in a drug-induced stupor inside a Nevada brothel.

Rehabilitation and redemption are two solid bulwarks of American society. So some might see Lewis’ and Odom’s return to the spotlight as an indication that ours is the land of second and even third chances.

But how is it that some of the same people who are furious about Spicer’s presence on the “Dancing with the Stars” roster are nonplussed about Lewis and Odom’s past history and participation?

Instead, Sean Spicer is viewed as the offensive one, a cultural pariah who is to be shunned and cast off, hopefully even forgotten. All for the “sin” of working for President Trump.

Apparently, all are welcome on the show – unless you have a past tie to the Trump administration and haven’t publicly acknowledged your transgressions, which The New York Times and Washington Post would happily publish.

The deterioration of the current political environment and the development of a Trump-connection litmus test evokes memories of the McCarthy era, when people testifying before Congress were asked what would become known as “the $64,000 question”: "Are you now or have you ever been a member of the Communist Party of the United States?"

It seems likely that we’re coming to a day – and perhaps have already arrived at it in some circles – where people will be asked: Are you now or have you ever been a member of the Trump administration?

This is a chilling but likely scenario.

The highly politicized nature of life these days also brings to light an unfortunate and sad reality. Whereas people were once more likely viewed holistically and multi-dimensionally – that is, they might vote Republican but nevertheless keep their own counsel on a wide range of other issues – it seems that it’s now an all-or-nothing proposition.

In truth, life is full of “gray.” Many of us like one thing about a president and dislike another. That’s why President Ronald Reagan could argue with Democratic Speaker of the House Tip O’Neill during the day – and share a friendly drink with him later that night. They saw one another as fellow Irishmen on a long journey, not personal enemies in a winner-take-all war.

As this latest controversy involving the dancing Spicer skips about in fitting fashion, I’m reminded of a favorite line from the scene of a favorite movie. In the 1994 classic, “Clear and Present Danger” starring Harrison Ford, the president of the United States is trying to convince Ford’s CIA character, Jack Ryan, to participate in a political cover-up.

“It's the ol' Potomac two-step, Jack,” the president says gently.

Critics of President Trump and Sean Spicer hope the former press secretary will follow Jack Ryan’s lead and stay off the dance floor. ABC executives hope millions of people tune in to see if Spicer dances with a partner as well as he danced around hostile questions from reporters in the White House.

In the end, the ‘ol Potomac two-step rages on, albeit clumsily. It’s anybody’s guess who will be left standing.