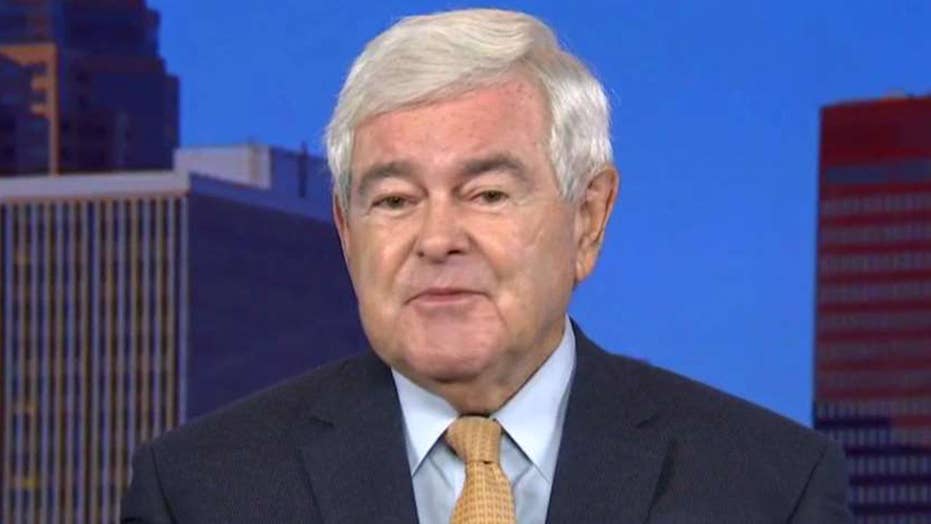 Former House speaker and Fox News contributor gives his take on the balance of power in Washington.

There is one clear certainty about Tuesday’s midterm elections. Democratic Sen. Chuck Schumer of New York will not become the Senate majority leader.

I have looked at every Senate race this year, and I do not see any way the Democrats can win majority control of the chamber when voters cast ballots just a few days from now.

The supposed blue wave broke before making it to shore. This is a much bigger breakthrough in national government than you might have expected.

NEWT GINGRICH: REPUBLICANS’ NEW RALLYING CRY IS ‘REMEMBER KAVANAUGH’ AND IT MAY LEAD THEM TO MIDTERM VICTORY

If the Democrats acquire a majority in the Senate they could block every person President Trump nominates for federal judgeships. Now that this seems unlikely, Majority Leader Mitch McConnell of Kentucky and the Senate Republicans will continue the amazing shift of the courts back toward a reliance on the Constitution as the source of legal decision-making.

This shift of the courts was the biggest achievement of President Trump’s first two years. Now it is likely guaranteed to continue.

If the Democrats acquire a Senate majority they would launch dozens of investigations and help hobble the senior leadership of the government. They would make life endlessly frustrating for Trump appointees.

Instead of developing new policies, the president’s team would be absorbed with preparing for unending, irritating – but dangerous – hearings. Their time and energy for new reforms and new policies would be severely limited.

A Democratic Senate would pursue hearings on issues Democrats thought would keep their base excited and enthusiastic.

Among the biggest losers Tuesday will be the would-be Democratic presidential candidates mired in the minority.

The outbursts of Democratic Sens. Cory “Spartacus” Booker of New Jersey and Kamala Harris of California at the Senate confirmation hearing for now-Supreme Court Justice Brett Kavanaugh were early indications of the frustrations of trying to run for president while being in the minority.

Sens. Booker, Harris, Kirsten Gillibrand of New York, Bernie Sanders of Vermont, and Elizabeth Warren of Massachusetts are among those who will lack the majority pulpit to schedule the right hearings on the right topics to maximize favorable publicity.

Depending on the scale of the Democratic defeat, Schumer may face a rebellion against his own leadership for failing to bring his party into the majority.

While Schumer kept his Democratic team together on big questions – such as opposing tax cuts and Kavanaugh’s nomination to the Supreme Court – Republican Leader McConnell simply kept on winning, despite a breathtakingly small margin in the Senate, where Republicans hold 51 of 100 seats.

President Trump has been the foundation for everything because he assembled the red state majority. His policies, mass rallies, tweets and media savvy have kept that majority together for two years.

The president may not have broadened his base, but he has certainly solidified and educated it. If Sen. Joe Manchin, D-W.Va. loses Tuesday, it will be a sign that no candidate can overcome being on the wrong team in a state President Trump carried by a 42 percent margin.

McConnell has once again vindicated his methodical, steady approach to governing. His memoir, “The Long Game,” is filled with examples of how patient and persistent he is.

McConnell helped recruit and fund Republican Senate candidates and in some cases provided campaign managers. When necessary, he has talked bluntly with incumbent senators to get them to do what is needed for re-election

McConnell’s consistency in working with Senate Judiciary Committee Chairman Chuck Grassley, R-Iowa, to get Kavanaugh approved for the Supreme Court may have been the final turning point in defining the Senate elections in the key states.

Gardner did a superb job of working with all his Senate Republican colleagues and the Trump White House to recruit the candidates who had the potential to win. Without these strong, competitive candidates, the opportunity for a Republican victory would never have materialized in a number of states.

It is easy to forget how much Republicans shot ourselves in the foot with weak – and sometimes downright weird – candidates in 2012 and 2014. Not a single unforced error was made in recruiting candidates for this year.

RNC Chair McDaniel has had the wisdom, energy and perseverance to do an outstanding job of fundraising and then focusing that fundraising to expand and deepen the Republican ground game nationally.

There are some key reasons Republicans won eight of 10 special elections for the House these past two years. One of them is the extra votes turned out by the RNC’s local neighborhood outreach program.

McDaniel deserves credit for the vision to grow the system – even beyond its 2016 base. She has had the energy to raise the money and the personality to keep the party focused on winning instead of bickering.

Speaking of 2016, if the size of the Republican victory Tuesday shocks the media and the left, some credit must go to the years of hard work by former RNC Chair Reince Priebus and his leadership in building a big enough system to help win hard-fought states like Pennsylvania, Michigan and Wisconsin.

Control of the 435-member House in Tuesday’s elections will be a tough contest that could go either way. I think the GOP range is probably a low of 204 to a high of 229. A party needs at least 218 seats to have majority control of the House. None of us will know for sure which party comes up on top until the votes are counted.

The Senate as an institution is settled. Individual Senate races are still up in the air, but the general picture is clear.

There is no circumstance where Schumer can become majority leader. At a minimum, we will have a two-vote Republican majority after Tuesday.

McConnell’s majority will certainly grow. My current conservative estimate is a GOP gain of three seats from the 51 seats Republicans currently hold. My optimistic prediction is a gain so high I am afraid to put in writing. Leader McConnell dislikes and distrusts projections, so I will keep my much more positive number to myself.

The Trump Revolution will be safe and continue to grow in the Senate – and that is an amazing outcome for this year.