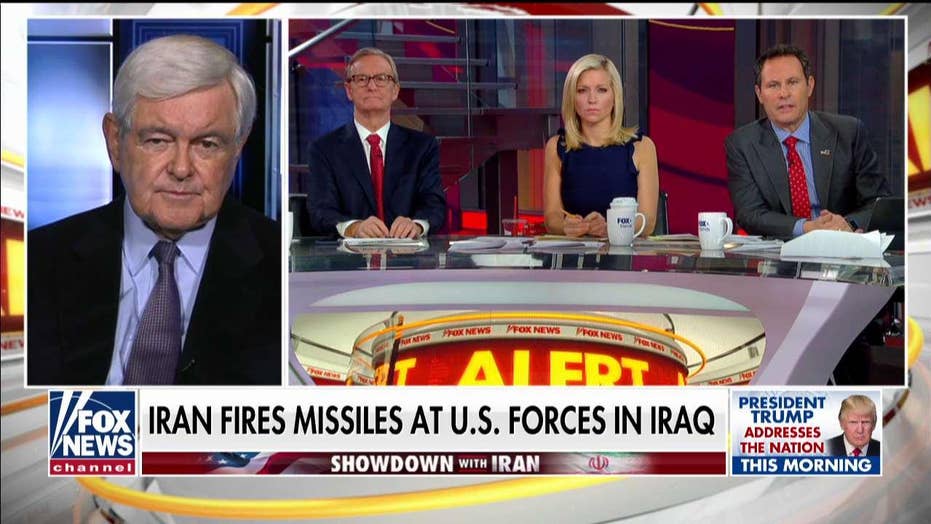 Newt Gingrich, former Speaker of the House, discusses Iranian regime change and the current unpopularity of the Mullahs

President Trump on Wednesday gave the most honest, direct speech about Iran's dictatorship that has ever given by an American president. It was a refreshing break from the lies and self-deception that have characterized much of the American establishment’s efforts to avoid thinking about it.

Watching the various reactions to the killing of Iranian Gen. Qassem Soleimani, I have been struck by how historically ignorant most politicians and commentators are – and how our political-diplomatic language and mindset block us from reality.

The reality is: Iran's dictatorship has been waging war against the United States for more than 40 years.

I was a freshman in House of Representatives in 1979 when the Shah Mohammad Reza Pahlavi was overthrown and Ayatollah Ruhollah Khomeini became the dictator of Iran.

Khomeini maneuvered brilliantly from Paris to Tehran. He gave President Jimmy Carter’s administration smooth reassurances that he feared the Americans too much to be a threat. Once in power, however, Khomeini was quite clear about his hostility to the United States.

For the last 40 years, I have watched the Iranian dictatorship wage war on America.

On Nov. 4, 1979 protesters chanting “Death to America” seized the U.S. Embassy in the Iranian capital of Tehran in complete violation of international law.

Host governments have an obligation to protect embassies. But, in fact, the Iranian dictatorship used the embassy seizure to pressure the United States.

When it was clear President Carter would not respond forcefully to the attack on our embassy and the hostage taking, Khomeini said “the Americans can’t do a damn thing against us,” which became a slogan in Iran.

I have listened to a Carter administration official who had been in the negotiations with Khomeini’s new dictatorship. The United States offered economic aid, offered to fulfill its military contracts, and promised to supply the parts for the American military equipment Iran already had.

On every offer, the Iranians responded that they didn’t care about any of that. They wanted the U.S. to turn over the shah, who was in exile in the U.S. and dying of cancer, so they could try him and kill him in public.

The hostility was implacable and unyielding. Further, “Death to America Day” became a national holiday in Iran in 1987, commemorating the anniversary of the seizing of the American Embassy.

This attitude of American weakness persisted for 40 years. As Clifford May reported for The Washington Times: “Indeed, on Jan. 1, in response to Mr. Trump’s vow to hold Iran’s rulers 'fully responsible’ for any lives lost at the besieged Baghdad embassy, the supreme leader’s official website proclaimed: “There is no damn thing you can do.”

Despite every effort of the Carter administration, the 52 American hostages were held for 444 days and released only as Ronald Reagan was sworn in as president.

I remember sitting on the platform at the Capitol for Reagan’s inauguration and hearing that the hostages had been released. It was an electrifying moment.

The Iranians knew they had to take whatever concessions they had gained from the Carter administration through the Algiers Accord and release the hostages, because Reagan wouldn’t have given in to any of their demands. He would have saved the hostages and inflicted a high cost on the Iranians.

Still emboldened by what they saw as longtime American weakness under the Carter administration, Iran's attacks on America continued.

As Orde Kittrie has reported for the Foundation for Defense of Democracies, U.S. courts found Iran responsible for "a Hezbollah truck bomb that killed 63 people in April 1983 at the U.S. embassy in Beirut, including 17 Americans," while a second Hezbollah truck bomb "destroyed a U.S. Marine barracks in Beirut in the following October, killing 241 U.S. service members.

Kittrie added that U.S. courts have held Iran responsible for "Hezbollah’s abduction and torture in Lebanon throughout the 1980s of U.S. citizens working in Beirut, including two journalists, a priest, and three administrators of educational institutions."

On Jan. 19, 1984, President Reagan’s State Department listed Iran's dictatorship as a state sponsor of terrorism. This designation has been maintained for 36 years of continuous Iranian support for terror.

The most famous example of the Iranian use of a surrogate was Imad Mughniyeh, who operated in Lebanon. He reported to Soleimani, who, as chief of the Quds Force, led the most militant and aggressive wing of the Islamic Revolutionary Guards Corps.

Mughniyeh was the planner behind the killing of 241 Marines in Beirut in 1983. He was ultimately killed in a joint U.S.-Israeli operation but only after he had terrorized and killed a remarkable number of people.

When the Marines were killed in Lebanon, President Reagan rejected an all-out effort to control that country. He was focused on defeating the Soviet Union and did not want to disperse his resources.

We may finally be on a path to ending the 40-year war.

However, when the Iranian dictatorship interpreted this as weakness (in the Carter tradition) it learned an expensive lesson. In April 1988 the Iranians hit an American warship with a mine and injured 10 sailors. In a sharp skirmish, the United States destroyed much of the Iranian navy. Iran never challenged Reagan again.

After Reagan, the United States took a relatively passive view about Iranian provocations. The Iranians just kept working to expand their terrorist network.

As a result, the scale of the Iranian efforts to fund terrorists and create satellite states it can control is far greater than most Americans think.

The Soufan Center's research shows where Iranian money is flowing in the Middle East, and where Iranian-backed proxies and militant groups are active.

Iraq receives up to $1 billion, some of which ends up in the hands of militia organizations.

Lebanon, which is of course home to Hezbollah, sees around $700 million of Iranian financial support – practically all of which goes to the militant group.

This is the scale of activity Soleimani was managing, in addition to Iran's direct assets.

Furthermore, the Iranian dictatorship’s war against America has not been restricted to the Middle East.

According to Kittrie: “U.S. federal courts have, over the last two decades, issued some 92 judgments finding the Iranian government and its officials liable for acts of terrorism that claimed American victims."

These judgments amount to $53 billion, including $1 billion against Ayatollah Ali Khamenei (the current supreme leader of Iran) for his responsibility in authorizing the attacks.

In fact, the deadliest anti-American terrorist act of our lifetimes has an Iranian component. To quote Kittrie again:

“The September 11, 2001 attacks … killed some 3,000 people. In December 2011, a U.S. District Court found the Iranian government and Khamenei himself among those responsible. The court’s lengthy opinion included extensive evidence that the Islamic Revolutionary Guard Corps had provided ‘funding and/or training for terrorism operations targeting American citizens, including support for Hizballah and al Qaeda’ and evidence that IRGC activities were controlled by Khamenei.

“The opinion also quoted from the 9/11 Commission report that ‘Iran furnished material and direct support’ for travel for at least eight of the hijackers. The Iranian government, Khamenei, and the other defendants have thus far been ordered to pay over $16 billion in compensatory and punitive damages to the victims.”

I was speaker of the House when the Iranians deliberately targeted and killed 19 American servicemen in a truck bombing in Saudi Arabia in 1996. According to Kittrie, a federal judge found the attack was “approved by Ayatollah Khamenei, the supreme leader of Iran at the time.”

I remember getting the phone call from President Bill Clinton about the disaster. Yet, despite help from Saudi intelligence, the Clinton administration wanted to avoid proving the Iranians did it.

In fact, then-FBI Director Louis Freeh was so frustrated by the Clinton administration refusal to pressure the Saudis to allow a full-scale FBI investigation, he turned to former President George H.W. Bush to get him to ask his friends in Saudi Arabia to help.

After the Clinton administration’s failure to respond to the killing of Americans at Khobar Towers, the Iranian support for attacking Americans continued.

In August 1998, Iranian-backed truck bombings at U.S. embassies in Kenya and Tanzania killed 300 people and wounded more than 5,000. Then, in October 2000, 17 American sailors were killed when Iranian proxies bombed the USS Cole in Yemen

When Clinton left office, President George W. Bush was fully absorbed by the war in Iraq.

Then President Barack Obama had a fantastical vision of an American-Iranian relationship that would stabilize the region. He ignored Iran’s terrorist activities, sent the regime $1.7 billion in cash, and promised to help release $150 billion in frozen or sanctioned Iranian assets through the faulty Iran nuclear deal.

Given their experience of dealing with strong words but passive policies from some American leaders, the Iranian dictatorship thought President Trump would be more of the same.

As May wrote for the Washington Times: “On Monday, Gen. Soleimani’s replacement, Gen. Esmail Ghaani, vowed ‘to remove the American presence from the region’ and help bring about the ‘global rule of the Hidden Imam,’ a messiah figure in Shiite Islam, one whose will is done through the supreme leader. Yahya Rahim-Safavi, a senior adviser to Ayatollah Khamenei, vowed the U.S. would leave the Middle East 'in disgrace and defeat.’

President Trump's speech was a good warning that the Iranian dictators are misjudging Trump as much as they misjudged Reagan.

We may finally be on a path to ending the 40-year war.