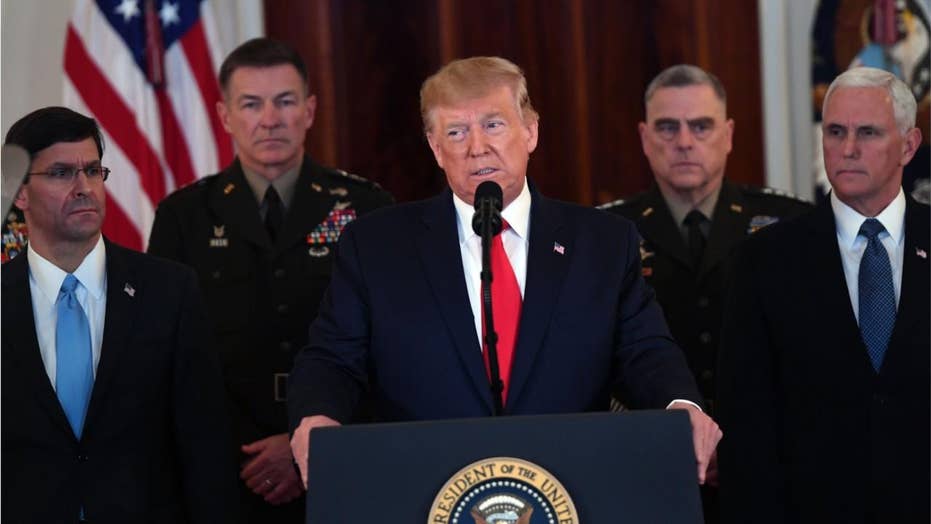 James Carafano: Trump and the US should stay the course on Iran

President Trump responded to the Iranian regime after it launched 15 missiles at U.S. and coalition forces in Iraq. The president offered a chance to renegotiate.

In his address to the nation Wednesday, President Trump’s re-upped – clearly and in no uncertain terms – his commitment to challenging Iran’s continuing efforts to run amok in the Middle East.

While Trump critics in the U.S. like to claim his policies are mercurial, inept and irresponsible, the Iranian regime no doubt knew exactly what he was going to say. After all, they gave him all the information needed to shape his speech.

First, Iran gave Trump Wednesday morning’s inept face-saving fireworks display, showering more than a dozen missiles on bases in Iraq where U.S. military forces are stationed. The “retaliatory” attack was a transparent attempt by the Iranian regime to save face with the folks back home.

Technically, Iranian leaders can tell their increasingly disaffected citizens that they’ve now done something to avenge the death of Qassem Soleimani, Iran’s chief architect of terrorism. But what they did was pretty much next to nothing.

To reduce the possibility of U.S. blowback, the Iranians actually notified Iraq before the missile shower – a message they surely know would be conveyed to the Americans and other coalition forces in the target areas.

TRANSCRIPT OF TRUMP’S REMARKS ON IRAN

As intended, the missiles did little damage. Then the regime quickly announced the payback was over. The message could not have been any clearer if the Iranians had said: Ladies and gentlemen, this is all a show.

Trump’s response was measured, responsible, and proportional – just as was the drone strike that killed Soleimani.

No, Trump said, the U.S. isn’t going to fire back at Tehran like in some cinematic Wild West shootout. Instead, the U.S. will continue to take actions designed to get Iran to “be better” –actions that will further isolate and punish the regime for its destabilizing behavior.

Trump’s endgame also remains the same: limit the Iranian regime’s ability to wreak mayhem, while offering it the option of going back to the negotiating table to do a real deal – one that addresses the mullahs’ most troubling behaviors.

Odds are the Iranians knew this is exactly the speech they were going to get. Their face-saving strike that saved no face can be cold comfort at best.