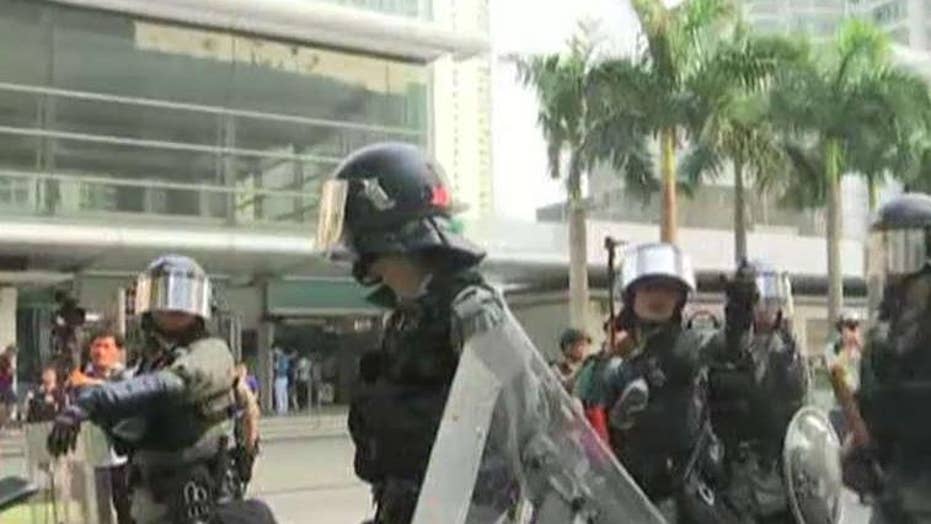 As the Hong Kong protests continue and calls for freedom become more widespread, the United States now has an opportunity to take action.

More than 20 years after the British handover of Hong Kong to China in 1997, the high degree of autonomy and freedoms promised to the Hong Kong people have been suppressed and violated by the ruling Chinese Communist Party.

Though the extradition bill that ignited these protests has been withdrawn, the demonstrations have evolved into demands for Hong Kong Chief Executive Carrie Lam’s resignation, an investigation into police brutality, the release of arrested demonstrators and more democratic freedoms.

GINGRICH AND WHITON: TRUMP CAN SUPPORT HONG KONG FREEDOM FIGHTERS WITH THESE ACTIONS

Indeed, public platforms for protesters to voice concerns are being organized by Lam, but concrete progress toward protecting the rights of the Hong Kong people remain elusive.

Police have even stooped to dehumanizing protesters. Recent footage was released showing officers kicking what a senior police official described as a “yellow object” – when it was clearly a human being lying on the ground dressed in a yellow shirt.

Leaders in Congress on both sides of the aisle have made strong statements condemning the Chinese and Hong Kong governments' exploits – but now is the time to attach action to words.

The Hong Kong Human Rights and Democracy Act will send an important signal that the United States will act to protect the rights of the people of Hong Kong – and continue to be a leading advocate for freedom in the world.

Congress can do this by passing the Hong Kong Human Rights and Democracy Act of 2019 introduced by Rep. Chris Smith, R-N.J., and Sen. Marco Rubio, R-Fla.  The bill would hold Hong Kong and Chinese officials accountable for their promises to protect the rights and freedoms of the Hong Kong people.

In 1984, under China's "One Country, Two Systems” model, China signed a joint declaration with the British that would give Hong Kong a “high degree of autonomy” after the 1997 handover. It protected Hong Kong’s rights and freedoms, “including those of the person, of speech, of the press, of assembly, of association, of travel, of movement, of correspondence, of strike, of choice of occupation, of academic research and of religious belief.”

The declaration further promised to uphold the rule of law and protect human rights and Hong Kong’s 1997 Basic Law, which identified democratic elections as an "ultimate aim."

In 1992, the United States passed the Hong Kong Policy Act, which resulted in Hong Kong being treated separately from the rest of mainland China in terms of trade, commerce, immigration, investment, and cultural and educational collaborations. However, while Hong Kong has grown to become an international economic and business hub (America was Hong Kong’s No. 2 trading partner in 2018), it has not evolved into the democratic and free "special administrative region" promised decades ago.

As Hong Kong moves toward what a report by the British House of Commons Foreign Affairs Committee called “One Country, One and a Half Systems” – with the Communist Party’s approach being closer to a “One Country, One System” model – the United States must not turn a blind eye to the violations against Hong Kong’s freedoms and autonomy.

Under the policy act, Hong Kong’s special treatment is based upon its maintenance of its promised autonomy. These privileges however can be selectively suspended by the president through executive order.

In Congress, the proposed Human Rights and Democracy Act expands on this by directing “various departments to assess whether political developments in Hong Kong justify changing Hong Kong's unique treatment under US law.”

It requires the State Department to annually certify and report to Congress whether Hong Kong’s status of autonomy, and the government’s adherence to protecting civil liberties and upholding of the rule of law justify its continued special status.

The Commerce Department would also submit an annual report to Congress that determines if China is exploiting Hong Kong to circumvent U.S. sanctions and export controls.

This important bill also would ensure that violators of human rights in the region are held accountable by applying sanctions and banning entry to the U.S. It also provides protections for nonviolent protesters who have been arrested for defending human rights or the rule of law in Hong Kong by prohibiting denial of U.S. visas.

The final version of the Human Rights and Democracy Act must include all of these requirements, and it must be passed into law.

I recently signed a letter to Congress calling for its passage. The United States has a clear moral and economic interest in preserving the autonomy and freedoms allotted to the people of Hong Kong.

The Human Rights and Democracy Act will send an important signal that the United States will act to protect the rights of the people of Hong Kong – and continue to be a leading advocate for freedom in the world.