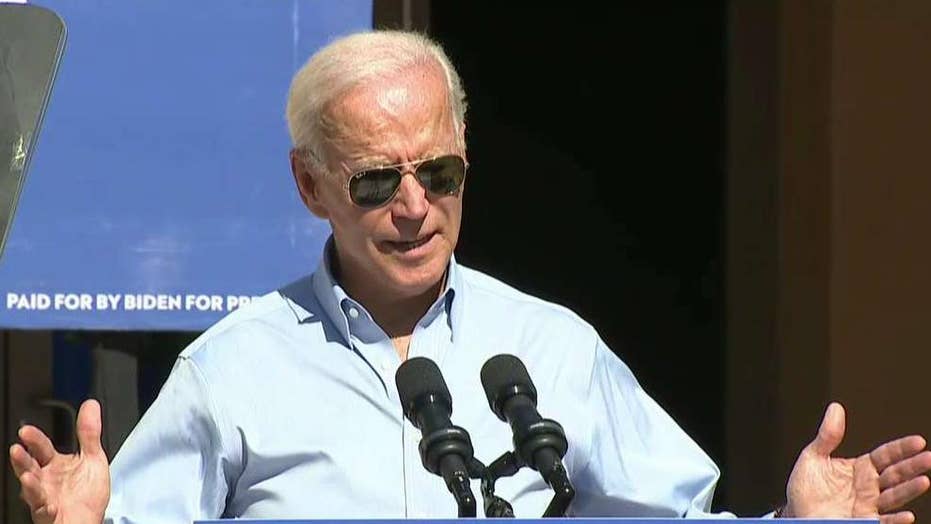 President Trump’s July 25 phone call with Ukrainian President Volodymyr Zelensky was beautiful. Except for the part where Trump talked about former Vice President Joe Biden’s son Hunter. That was inappropriate.

But what’s even more inappropriate is the hysterical, hyperbolic, hypocritical, fabricated (I’m talking to you, Katy Tur) impeachment-seeking reaction to the call.

In football terms, President Trump deserved a five-yard penalty flag. What he did was the equivalent of a false start.

Trump was wrong to request that Zelensky work with U.S. Attorney General William Barr to find out what happened when then-Vice President Biden successfully pressured an earlier Ukrainian president to fire a prosecutor who was looking into misconduct by a company called Burisma Holdings. Joe Biden’s son Hunter joined the Ukrainian company’s board in 2014, when his father was serving as vice president.

Republicans need to wise up. The overreacting Democrats and their media backers are the real threat to civility, norms and fairness.

Justice should be blind. No one’s fingers should be on the scales of justice, especially when the fingers belongs to the president or other powerful elected officials.

But to Trump’s critics – meaning elected Democrats and much of the media – Trump was headhunting, and they want to throw him out of the game via impeachment. They always have.

This is grossly disproportionate and highly hypocritical.

Trump’s critics don’t want to face the fact that Joe Biden – currently a leading candidate for the 2020 Democratic presidential nomination – threatened to withhold $1 billion in American loan guarantees to Ukraine unless the Ukrainian president fired a prosecutor Biden didn’t like.

How many times has the video of Biden’s threat been played on CNN or MSNBC?

The former vice president has a Hunter Biden-sized conflict of interest in this matter and his threat of withholding U.S. loan guarantees makes things worse. But Trump’s critics and much of the media don’t care.

To them, it’s OK when Biden does it. It’s not OK if Trump does.

In addition, three Democratic U.S. senators used their positions of power to pressure Ukrainian officials to do their bidding regarding Special Counsel Robert Mueller’s investigation of President Trump.

So here again we have a double standard. Democrats want us to believe it’s OK when Democratic senators call on Ukrainians to investigate their rival, but it’s not OK if Trump does.

When it comes to working with foreign nations to influence an election, former President Barack Obama’s request to then-Russian President Dmitry Medvedev takes the cake.

Obama, not wanting his national security positions to become a reelection issue, was caught on camera in 2012 asking Medvedev to tell then-Prime Minister Vladimir Putin that Obama needed “space” on missile defense negotiations until after U.S. presidential election was over.

In other words, Obama was saying: if you, Vladimir, don’t raise this matter during the election, I’ll have more “flexibility” after the election to reach an accommodation.

Too bad Obama said it on camera. If a whistleblower heard him say it, the case against Obama might have been packaged better.

Even by Washington’s typical standards, the Democratic-media hypocrisy toward Trump is over the top. So too is impeachment.

Many Democrats and their echo chamber in the media have wanted to impeach the Trump even before he took office.

At first, several liberal groups sought to change the outcome of the 2016 election in the Electoral College, but the margin of Trump’s victory was too big for them to succeed. More than 60 elected Democrats boycotted his Inauguration.

As offensive and norm-breaking as Trump can be, it is more norm-breaking and offensive to refuse to accept an election result and instead seek to turn all forms of political disagreement into a constitutional crisis in which the Congress tries repeatedly to remove the president from office, negating the results of an election.

Republicans need to wise up. The overreacting Democrats and their media backers are the real threat to civility, norms and fairness.

Impeachment is not a game. It’s the Constitution’s safety valve and it should only be applied in the gravest of threats to our nation and system of government.

But Republicans of all stripes need to recognize the threat to national unity and cohesion does not come from Trump’s request to Zelensky – it comes from the refusal of Democrats to let the American people decide who our president should be.