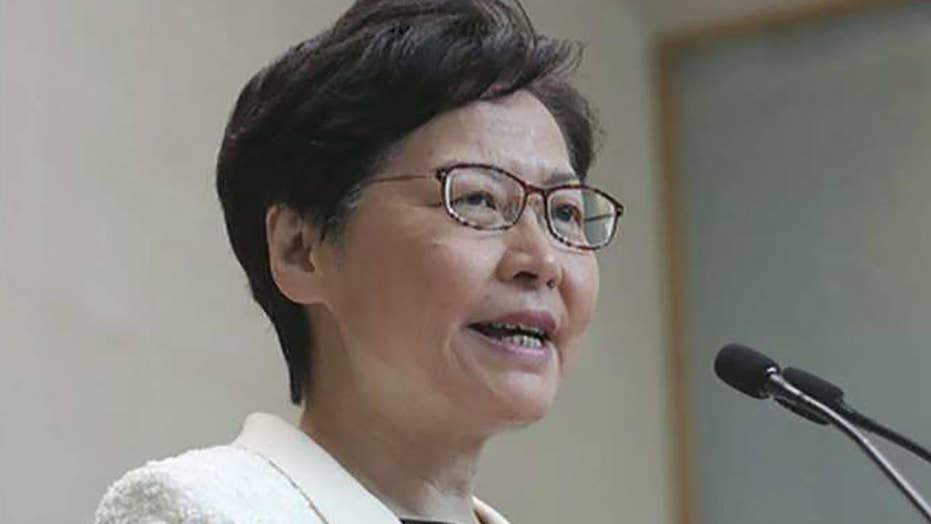 The Chinese Communist Party faces a crisis of its own making in Hong Kong.

The people of Hong Kong finally had enough when Beijing’s cronies proposed an extradition law that effectively would have imported mainland China's political repression. For the past three months, demonstrators have been taking to the streets in massive numbers to protest the Chinese Communist Party’s tightening control over the city.

As a result, the government’s decision Wednesday to withdraw the extradition bill will not quell the protests, which have evolved into a larger quest for freedom.

The outcome of the struggle of the people of Hong Kong will have a significant bearing on the future of China – and U.S. national interests. As President Trump has said, a U.S.-China trade deal would be hard to complete if Beijing uses force in Hong Kong.

The crisis is also a reminder that the ruling Chinese Communist Party violates almost all of its international agreements. In this case, China has violated the 1984 Joint Declaration with Britain and the Basic Law that came into effect upon Hong Kong’s 1997 handover, ending its status as a British colony. Both measures were supposed to preserve Hong Kong’s freedoms and establish real democracy.

Clearly, the promises made to the people of Hong Kong decades ago have been disregarded and violated by China’s ruling Communist Party. Now, in Hong Kong the world can see what many Chinese really think about their unelected government. This embarrassment comes just as Beijing is preparing to celebrate the 70th anniversary of the state’s founding Oct. 1.

Furthermore, Beijing faces an unsolvable conundrum. Unlike the Tiananmen Square massacre 30 years ago, when the government used brutal force on an isolated population that wanted rights it lacked, in Hong Kong a Westernized population connected to the world is fighting to preserve the freedom it has – and to which is legally entitled. History has shown than no amount of force will fully extinguish their quest.

Furthermore, Chinese Communist Party General Secretary Xi Jinping is unlikely to order an overt invasion of Hong Kong by the People’s Liberation Army. Doing so would cause free nations to end Hong Kong’s status as a trade and financial hub separate from the mainland — and thus deny Beijing a major source of capital and gateway to the outside world. Xi has painted himself into a corner.

Instead of the army, Xi will likely use the Hong Kong police — possibly augmented by mainland thugs — to increase repression. In fact, this has already begun.

Police have arrested more than 1,000 citizens, and each new day brings more footage of cops brutally beating subdued protesters. Among those arrested were legislators from the democratic camp and protest leaders who have been the strongest advocates for nonviolence.

Hong Kong’s Chief Executive Carrie Lam admitted in a leaked private discussion that she has been rendered powerless by the “national level.” Don’t be fooled – Beijing already calls the shots.

All of these factors imply that Hong Kong will be unsettled until Chinese Communist Party officials engage in a serious dialogue with democratic legislators that paves the way to the democracy Hong Kong was promised.

America has a strong interest in supporting this quest not only because of our historic support for those willing to struggle for their own freedom, but because it will distract and weaken the Chinese Communist Party that wages cyberwar on America, steals our intellectual property, robs us on trade, kills our citizens with fentanyl, and works to erode the rule of law globally.

The Trump administration can take four practical steps to help the people of Hong Kong.

First, use the U.S. Global Magnitsky Act. Named for a murdered Russian dissident, the law allows denial of U.S. visas and property sanctions to be applied to human rights abusers. Gradually apply it from abusive police leaders to high-ranking officials until repression and political arrests end.

Second, use declassified intelligence to expose the corruption of Chinese officials. To solidify his power, Xi conducted an “anti-corruption” purge that actually just replaced incumbent party bosses and his competitors with his own immoral cronies. Chinese citizens undoubtedly suspect this favoritism and graft, but it should be made clear to all. Weakening Xi helps Hong Kong and America.

Third, use the anti-money laundering provisions of the Patriot Act to seize bank accounts and other property of corrupt Chinese officials. We should urge allies with large Chinese populations – such as Australia, Singapore and Canada – to do the same. We can also send home the “princeling” children of Communist Party officials studying or otherwise residing in the United States, and other Chinese expatriates who support the party. Those who keep hardliners like Xi in power will start to think twice.

Fourth, help Hong Kong’s peaceful protest leaders by providing encouragement and technology. Taxpayer-funded organizations intended to do this, such as the National Endowment for Democracy, are featured substantially in the federal budget – but are not present in reality. President Trump should order his administration to expand the availability of satellite phones and other technologies that can survive an Internet shutdown in Hong Kong. Washington should also work with Ukrainians with recent experience resisting repression and other veteran dissidents to train and encourage protest leaders, either in Hong Kong or in the freer environs of Taiwan if necessary.

The free world’s greatest adversary has run haplessly into serious political trouble. For our sake, and the sake of those protesting China's communist totalitarian dictatorship, let’s take a stand for freedom in solidarity with the people of Hong Kong.

Christian Whiton was a senior adviser in the Donald Trump and George W. Bush administrations. He is a senior fellow for strategy and public diplomacy at the Center for the National Interest and the author of “Smart Power: Between Diplomacy and War.”