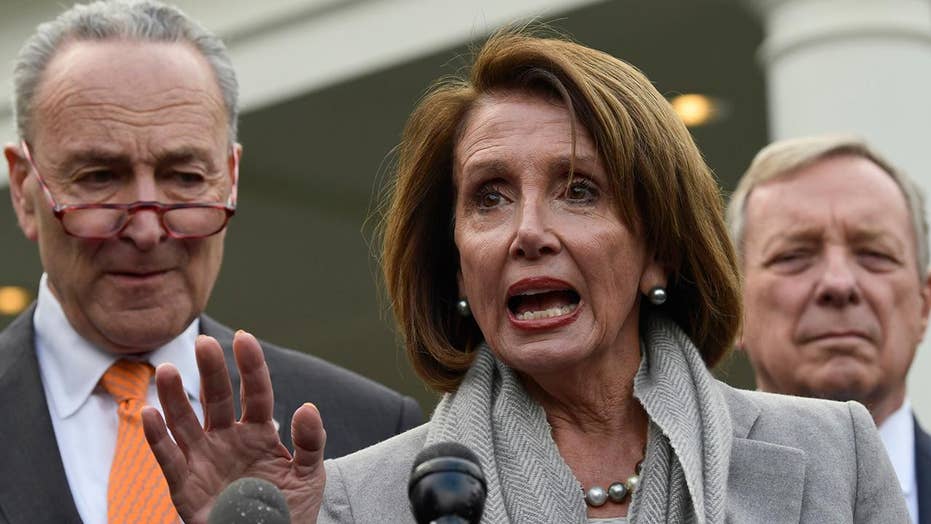 Are Dems being hypocritical of shutdown over border wall when they shut down the government over ObamaCare?

In 2019, the federal government will spend a whopping $4.407 trillion. Yet Congress and the president are shutting down the government in a dispute between the $1.3 billion the Democrats have approved for border security and the $5.7 billion the president is demanding -- precisely 0.0998 percent of the total federal budget. In Washington, that is considered a rounding error.

Worse, Democrats are doing it over a border wall strikingly similar to one that they almost unanimously supported just five years ago. While House Speaker Nancy Pelosi, D-Calif., now says that "a wall is an immorality," back in 2013, she supported a bill that required the construction of 700 miles of border fencing. (Trump has called for a wall of "anywhere from 700 to 900 miles" long.) The bill negotiated by the Gang of Eight, which included current Democratic leaders Sens. Charles Schumer, N.Y., and Dick Durbin, Ill., declared that "not later than 180 days after the date of the enactment of this Act, the Secretary [of Homeland Security] shall establish ... the 'Southern Border Fencing Strategy,' to identify where 700 miles of fencing (including double-layer fencing) ... should be deployed along the Southern border."

MARC THIESSEN: TRUMP STARTED THE SHUTDOWN BUT DEMOCRATS ARE ABOUT TO OWN IT

That's not all. The bill further said that "the Secretary may not adjust the status of aliens who have been granted registered provisional immigrant status ... until 6 months after ... [the Secretary submits] a written certification that ... there is in place along the Southern Border no fewer than 700 miles of pedestrian fencing." In other words, Democrats agreed that no illegal immigrants could get a path to citizenship until all 700 miles of border fencing had been fully completed.

Every Senate Democrat voted for the Gang of Eight bill -- including 36 Democratic senators still serving today. President Barack Obama agreed to sign it. Indeed, he praised the bill for including what he called "the most aggressive border security plan in our history" and said that "the Senate bill is consistent with the key principles for commonsense reform that I -- and many others -- have repeatedly laid out" (emphasis added). That bears repeating: Obama said building a 700-mile fence on the southern border was consistent with the principles of the Democratic Party.

Pelosi supported the Gang of Eight bill, saying at the time that "every piece of this legislation has had bipartisan support" (emphasis added). But now we are shutting down the government over a wall much like the one that Pelosi and Senate Democrats fully supported just five years ago?

Democrats will object that the Gang of Eight bill did fund a border wall, but it was in exchange for a lot of concessions. Of course it was. As Obama said at the time, "the bipartisan bill that passed today was a compromise." But today, Democrats are refusing to compromise or lay out what concessions they would accept in exchange for wall funding. When Trump rhetorically backed off the wall and talked about "steel slats" -- a fence -- Democrats ignored it. When Vice President Mike Pence reportedly offered a deal for $2.5 billion, Democrats dismissed it. In a White House meeting Wednesday, Trump asked Pelosi whether, if he agreed to end the shutdown and negotiate separately on border security, she would support wall funding. She said no.

In their response to the president's address to the nation, Schumer and Pelosi accused Trump of "manufacturing a crisis." That is simply untrue. As The Post reported this week, the United States now faces "a bona fide emergency on the border" as "record numbers of migrant families are streaming into the United States, overwhelming border agents and leaving holding cells dangerously overcrowded with children, many of whom are falling sick."

Democrats could not possibly be in a better position to demand concessions form Trump if they had manufactured a crisis. So put some demands on the table, for crying out loud. If Democrats think they have Trump cornered, then squeeze him and try get a lot out of him. But don't refuse to negotiate and tell us the wall is an "immorality" -- because their voting history shows they don't believe that.