President Trump did something Tuesday night that he has rarely done since taking office: He used the presidential bully pulpit to reach beyond his hardcore base of supporters to make his case to the American people as a whole.

Speaking from the Oval Office for the first time during his presidency, Trump embraced our country's tradition as a nation of immigrants, declaring "America proudly welcomes millions of lawful immigrants who enrich our society and contribute to our nation." He then offered a cogent explanation for why he believes we face what he called "a humanitarian crisis -- a crisis of the heart and a crisis of the soul" along our southern border.

He pointed out the human cost of our broken system to illegal migrants themselves, expressing compassion for the "children [who] are used as human pawns by vicious coyotes and ruthless gangs" and the "women [who] are sexually assaulted on the dangerous trek up through Mexico." He shared heartbreaking stories of Americans killed by criminal aliens who had no right to be here -- including a police officer in California who was murdered, a 16-year-old girl who was brutally stabbed in Maryland, and an Air Force veteran who was raped and beaten to death.

"I've held the hands of the weeping mothers and embraced the grief-stricken fathers," Trump declared. "I will never forget the pain in their eyes, the tremble in their voices, or the sadness gripping their souls."

And he laid out his solution, which he explained was "developed by law enforcement professionals and border agents" and includes funds for cutting-edge technology, more border agents, more immigration judges, more bed space and medical support -- and $5.7 billion for a "physical barrier" that he called "just common sense." Without naming her, Trump responded to the absurd charge from House Speaker Nancy Pelosi, D-Calif., that a wall is "immoral." Democrats voted repeatedly for physical barriers until he was elected president, he noted. If a wall is immoral, Trump asked, "why do wealthy politicians build walls, fences and gates around their homes? They don't build walls because they hate the people on the outside, but because they love the people on the inside."

The president did not unilaterally declare a national emergency. Instead, he called for compromise and said, "To those who refuse to compromise in the name of border security, I would ask: imagine if it was your child, your husband, or your wife, whose life was so cruelly shattered and totally broken?"

He was, in short, presidential.

Democrats insisted on equal time, which is highly unusual for presidential addresses other than the State of the Union. It was a mistake. In contrast to Trump, Pelosi and Senate Minority Leader Charles E. Schumer (N.Y.) came across as small and intransigent. 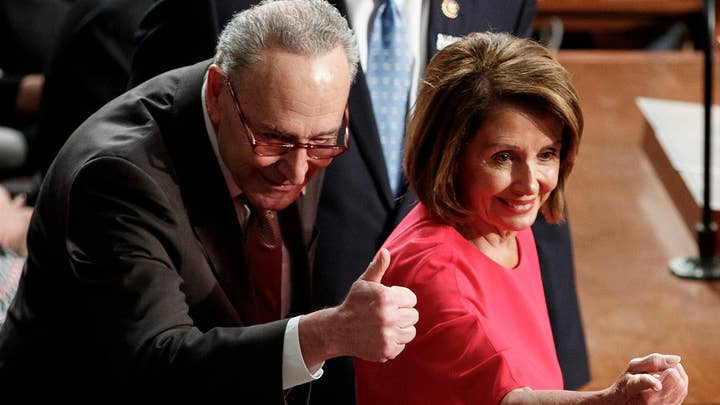 While Trump spoke calmly and rationally from behind the Resolute Desk, the Democratic leaders accused him of "pounding the table" and having a "temper tantrum." While Trump told human stories, they complained about process. They accused him of arguing that the women and children at the border were "a security threat" when he had just explained to the American people that they were victims, too. They charged him with using the "backdrop of the Oval Office to manufacture a crisis, stoke fear and divert attention from the turmoil in his administration." They were partisan and petty, while Trump came across as reasonable and even compassionate.

To normal Americans watching in the heartland, and who are not steeped in Trump hatred, the president must have seemed like the adult in the room.

And, most important, Pelosi and Schumer failed to use the one word that millions of Americans were longing to hear -- compromise. But Trump did. That is why the president won the night. Schumer and Pelosi appealed to their base, while Trump made an effective appeal to persuadable Americans.

Until now, Trump has owned the 18-day government shutdown that prompted this address, because he's the one who started it. But if Democrats continue to attack him, and won't entertain any compromise, soon the shutdown will be all theirs -- because they're the ones who have refused to end it.