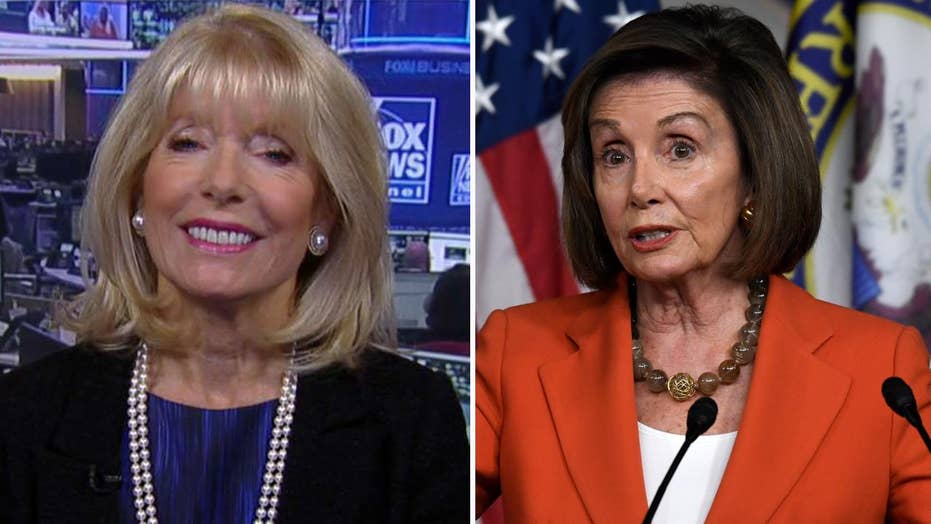 Liz Peek: Two Pelosi errors that could cost Democrats the election in 2020

Fox News contributor Liz Peek explains why Speaker of the House Nancy Pelosi's dismissal of the popular 'Squad' and putting Adam Schiff in charge of the impeachment inquiry could spell doom for Democrats' chances in winning the 2020 election.

It is an article of faith among political analysts that House Speaker Nancy Pelosi is a master strategist, and indeed her career is studded with significant accomplishments. Yet, more recently, she has made two grievous errors that could well cost Democrats the election in 2020.

The first was putting Adam Schiff in charge of the impeachment inquiry. The second is not reining in the so-called Squad, or the four female freshmen Democrats whose extreme progressive voices have helped push the Democrat party to the left, alienating much of the country.

The other day, Pelosi warned at a meeting with Bloomberg that the policies embraced by far-left candidates like Bernie Sanders and Elizabeth Warren could prevent Democrats from retaking the White House in 2020.

The speaker accurately pointed out that Democrats need to win swing states like Michigan and Pennsylvania to take back the White House, and that voters in those states are not on board with uber-liberal policies like the Green New Deal and “Medicare-for-All.”

“Remember November,” she said. “You must win the Electoral College.”

Moderate Democrats might suggest that Pelosi has not helped that cause. She woefully underestimated the clout of social media darlings Alexandria Ocasio-Cortes, Ilhan Omar, Rashida Tlaib and Ayanna Pressley (aka the Squad), initially dismissing them and deriding their policies.

Instead of courting the outspoken newcomers, and trying to modulate their voices, Pelosi initiated a feud which only enhanced their following and the divisions within the party.  AOC ultimately accused Pelosi of “singling out” Democrat women of color, which she deemed “disrespectful.”  Imagine: an upstart freshman Democrat calling out Nancy Pelosi.

The Squad has helped boost enthusiasm for extreme policies like the Green New Deal, raised millions of dollars for left-wing causes and threatened to “primary” Democrats not deemed sufficiently progressive. They have especially emboldened younger voters, and recently jumped into the 2020 race by endorsing Bernie Sanders. Bill Maher opined that the plug for Sanders could allow Elizabeth Warren to shift toward the middle; that is wishful thinking. If anything, it prompts Warren to continue her progressive agenda, confident that when Bernie falls back, his followers will come to her. Warren appears to be the rising front-runnner; her determined left-wing politics are rattling moderate Democrats, including Pelosi.

But it’s not just liberal policies that threaten Democrats’ chances heading into 2020. Those toss-up states also do not favor impeachment.  A New York Times/Siena poll from mid-October found that in the battleground states of Pennsylvania, Michigan, Florida, North Carolina, Wisconsin and Arizona, 53 percent of voters do not approve of impeaching and removing the president from office, while only 43 percent approve.

That’s good news for the president, especially if voters in those states sour on the impeachment process, as they might with House Intelligence Committee Chair Adam Schiff at the helm. Nancy Pelosi picked one of the most divisive figures in the House when she chose Schiff to oversee the impeachment inquiry, essentially ditching any effort to make the probe appear a bipartisan or non-political effort.

Normally, the Judiciary Committee oversees an impeachment investigation. Admittedly, having watched Jerry Nadler, who heads that committee, make a complete hash of recent hearings on the Mueller report, Pelosi was in a tough spot.

Still, Schiff is toxic, and she knew that.  Schiff’s aggressive and dishonest posture on the Russiagate probe has earned him the enmity of Republicans. A number of times Schiff claimed to have “proof” of Trump’s guilt, only to later come up short. Even after Special Counsel Robert Mueller delivered his report, stating he found no evidence that the Trump campaign colluded with Russia, Schiff doggedly insisted in an interview, “Undoubtedly there is collusion…”

After the Mueller report was published, Republicans on the Intel Committee asked Schiff to step down, suggesting someone so politically biased could not be trusted. He refused, but despite the accusation, Pelosi decided to make him ringmaster of the impeachment circus.

That was a serious error. As head of the impeachment probe, Schiff lied again, saying he had had no contact with the “whistleblower” that kicked off the investigation, when in fact he had. Many Republicans believe that Schiff coordinated with the anonymous accuser to mount the attack on the president. They also charge him with presiding over an unfair process, holding closed-door hearings and leaking only those tidbits favorable to Democrats.

Having opposed taking a full House vote authorizing the investigation, Pelosi finally succumbed to the public outcry demanding transparency, and held a vote last week. The vote on a process resolution revealed some fracturing of her caucus, which includes 30 seats held in Trump-won districts. That was an uncomfortable vote for those representatives; two voted against the impeachment drive.

Meanwhile, the country is nearly evenly divided on impeachment, with independents, according to a recent Washington Post poll, opposing the measure by a slim margin.

As the inquiry moves into a more public phase, voters will likely tire of endless TV-broadcast interviews and breathless reporting that unearths no new information. As the weeks drag on, they will begin to realize that, just as in the Mueller probe, there is inconclusive evidence of wrong-doing. Then they will begin to question how much taxpayer time and money is sunk into an impeachment investigation that is politically motivated and that, barring any new smoking guns, will die in the Senate.

They will then ask Democrats: what have you done for us lately? Have you passed the Mexico-Canada-US trade deal? Have you worked on infrastructure?

In November 2020, voters will be asked again: Are you better off than you were four years ago? And then they will reelect Donald Trump.