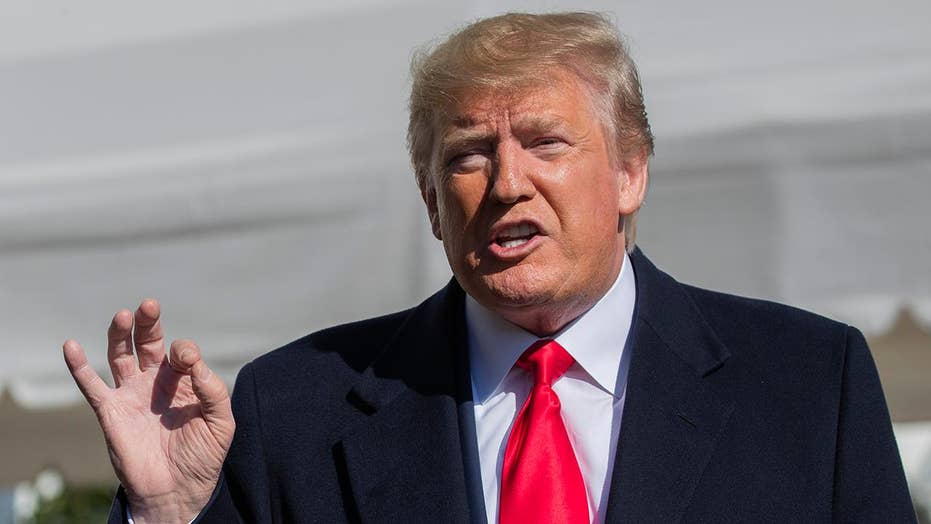 Andy Puzder: Why the left keeps discounting the Trump economy

Democrats and the mainstream media get it wrong yet again.

Democrats and the mainstream media keep underestimating the Trump boom. At this point, it’s beginning to seem more like defensiveness than wishful thinking.

Again and again, the experts get it wrong. Not unlike the political commentators who have been wishfully predicting “the end of Trump” for the past four years, economic naysayers have been telling us that a “Trump recession” is just around the corner. Clearly, its not.

Instead of wallowing in the gloom these experts foretold, investors are riding yet another stock market rally prompted by the latest series of expectation-shattering economic data. The numbers show, once again, that the Left’s dire economic predictions are based largely on an irrational disbelief in the strength of President Trump’s leadership — not sound economics.

JUSTIN HASKINS: WARREN HEALTH CARE PLAN WOULD BE A DEVASTATING NATIONAL NIGHTMARE AND HARM ALL AMERICANS

Following dire predictions of a recession (two consecutive quarters of negative GDP growth), preliminary numbers put third quarter GDP growth at 1.9 percent, 0.3 percentage points higher than the estimate from a Dow Jones poll of economists and roughly on par with growth in the previous quarter.

The biggest factor the experts overlooked was consumer spending, which grew by an impressive 3.9 percent. Ordinary Americans, it seems, have the confidence in the Trump economy that the experts lack.

On Friday, the Bureau of Labor Statistics confirmed this confidence when it reported that the economy added 128,000 jobs in October. That helped keep the unemployment rate near a 50-year low of 3.6 percent in October, a negligible uptick from the 3.5 percent figure in September and despite the negative impact of 46,000 GM jobs lost due to the 40-day union strike (those jobs will be back in November). And, by the way, the jobs numbers for August and September were revised upward by an additional 95,000 jobs.

The October data proves yet again that Trump is still presiding over the strongest jobs market since the 1960s. The high demand for workers is also driving the fastest wage increases in many years. Average hourly earnings are up 3 percent over the past 12 months, reaching $28.18 per hour.  Yearly wage growth has now been at or above 3 percent for 15 consecutive months. That’s means real money for American workers.

So the question is, why do people on the Left keep discounting the Trump economy?

The president’s opponents are desperate. They’ve been counting on a recession to sweep a left-winger such as Elizabeth Warren or Bernie Sanders into the White House next year, but time is growing short and there is no evidence of a recession in the near term.

It’s been going on too long to simply be a matter of mistaken math. Trump-hating economist Paul Krugman wrote that “We are very probably looking at a global recession, with no end in sight,” on the day Trump was elected in 2016. In March 2017, The Atlantic insisted that “President Trump still seems likely to face a contraction.” In 2018, “NeverTrump” columnist Quin Hillyer told his readers to ”buy gold, hoard cash, and stock up on good canned foods” before “the likely crash hits (I predict late-October).”

Then, this year, we were told multiple times that “inverted yield curves” meant economic catastrophe was imminent. That, too, was a false alarm.

Somehow, journalists and economic prognosticators seem to take their own inaccurate predictions as evidence of Trump’s failure, while either denying the very real boom times we’re actually experienced or attributing the strong and growing economy to factors beyond the president’s control. It’s getting absurd – honestly, at this point, let’s label it officially absurd. Even CNN admitted Thursday that this economic expansion could very well continue without interruption for several more years.

By now, it’s clear that the president’s opponents are desperate. They’ve been counting on a recession to sweep a left-winger such as Elizabeth Warren or Bernie Sanders into the White House next year, but time is growing short and there is no evidence of a recession in the near term.

This certainly helps explain why congressional Democrats are pursuing impeachment so aggressively despite the utter lack of evidence that Trump did anything wrong.  Not to mention the unfathomably remote possibility that, with an election a year away, 20 Republican senators would join 47 Democratic senators to produce the two-thirds majority required to remove a duly elected Republican president –  who has done nothing even remotely impeachable – from office.

But, with a rock-solid economy generating consistent gains for Americans at all income levels, it’s all they’ve got. There wasn’t a candidate on the stage during the Democratic debate who could beat Trump in a fair election, and the Democrats know it.  So, fairness be damned.

Let’s face it, the Left’s pessimistic economic predictions are less plausible than ever before. In fact, as the strength of the Trump economy becomes increasingly obvious, their unrealistic impeachment push suggests even the Democrats no longer believe their economic spin.  Seriously, with the economic data coming in, they can’t.

Andy Puzder was chief executive officer of CKE Restaurants for more than 16 years, following a career as an attorney. He was nominated by President Trump to serve as U.S. labor secretary. In 2011, Puzder co-authored "Job Creation: How It Really Works and Why Government Doesn't Understand It." His latest book is "The Capitalist Comeback: The Trump Boom and the Left's Plot to Stop It" (Center Street, April 24, 2018).
ADVERTISEMENT