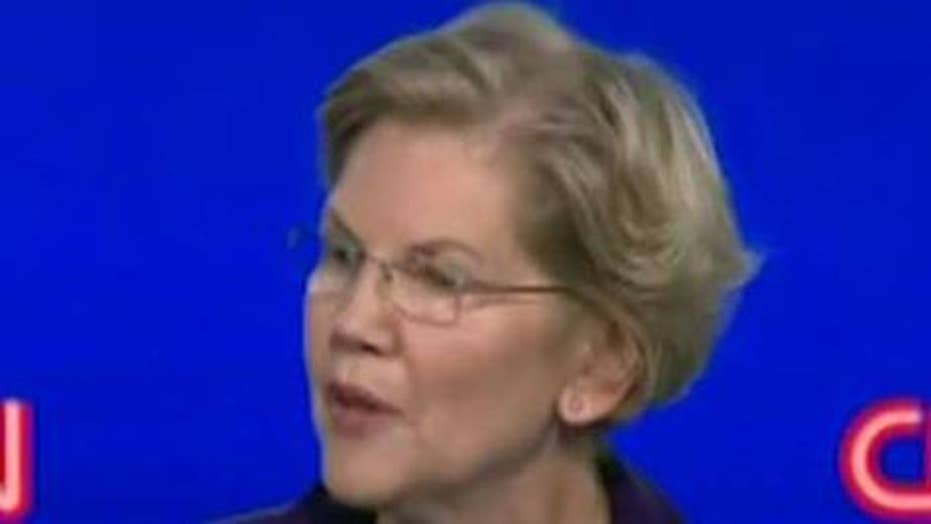 Far-left Sen. Elizabeth Warren, D-Mass., has marketed herself as the Democratic presidential candidate with a plan for just about everything. She’s right about that, but her incredibly expensive plans would cause enormous harm – especially her dangerous, nightmarish and fantasy-based “Medicare-for-all” plan.

If you want to destroy America’s health care system, deprive Americans of choice and timely access to medical care, cause needless deaths, create a gigantic new government health care bureaucracy, and throw an estimated 2 million hardworking Americans in the health insurance industry onto the unemployment rolls – well, you’re in luck, because Warren’s got a plan for that!

And despite what Warren claims, her plans nearly always involve gargantuan tax increases, massive new job-killing government regulations, and an alphabet soup of new government agencies and bigger existing ones to move America a step closer to the bankrupt ideology of socialism.

Of all the socialist policies and radical redistributionist schemes Warren has backed – and there are many – her “Medicare-for-all” proposal might be the worst, with even many Democrats running for president denouncing it.

The Warren plan would throw more than 100 million people off their current employer-sponsored health insurance plan, and put the federal government in charge of just about everything that occurs in the health care system through a variety of new regulations and price controls.

As long as you assume government is perfect, never makes mistakes, and is more efficient and cost-effective than the free enterprise system – and assume tax increase have no impact on our economy or family budgets – this is a great plan. However, all those assumptions are false.

Under Warren’s proposed system, there would be no health insurance premiums, co-pays, or deductibles. The feds would pick up the tab for the vast majority of health care spending.

The total cost? A whopping budget-busting near

ly $52 trillion over just the first 10 years according to the Warren campaign – more than double the current national debt. And since the cost estimate comes from Warren, it’s a safe bet to assume the actual cost of implementing WarrenCare would be significantly higher.

The Wall Street Journal reports that independent estimates project that 2 million people could lose their jobs under the Warren plan to outlaw the private health insurance industry. Think about that statistic: an astounding 2 million men and women working hard to support their families, pay their mortgages and save up to send the kids to college losing their jobs thanks to Elizabeth Warren.

How would you feel about that cavalier dismissal of your concerns about having a job if you were one of the folks Warren wants to tell, in effect: “You’re fired!”

But the biggest problem with WarrenCare is how she plans to pay for it. The senator pledges to provide everyone in America with health care, including millions of people who are currently in the country illegally, without raising any new taxes on the middle class. How, exactly, does Warren think this can be done?

PELOSI SAYS SHE'S 'NOT A BIG FAN OF MEDICARE-FOR-ALL,' CAUTIONS AGAINST PROMOTING IT IN 2020

First, Warren proposes trillions of dollars in new wealth taxes and taxes on businesses, the biggest of which is nearly $9 trillion in new payroll taxes on employers, meant to replace their current health care spending. So instead of employers paying for high-quality private health insurance plans, they would send that money to the federal government.

Second, much of the money that states are currently spending on health care – including Medicaid spending – would be funneled to the federal coffers.

Third, and most importantly, Warren would cut trillions of dollars in total health care spending over the initial 10-year period – a move that would cause intense rationing and increased health care wait times.

Warren’s proposal hinges on cutting payment rates for doctors, hospitals and other health care providers so that they receive, on average, 110 percent of the current Medicare payment rate, which now only pays providers about 90 cents for every dollar they spend on Medicare patients.

This would be a massive pay cut for doctors and hospitals. They now earn much more when treating patients with private health insurance – about $1.40 for every dollar spent on care. By Warren’s own estimate, providers would receive trillions of dollars less in just the first 10 years of her plan as a result of these pay cuts.

Additionally, Warren’s proposal would give the federal government the power to use “policy tools” like “global budgets, population-based budgets, and automatic rate reductions” to make sure total health care spending is tied to gross domestic product growth. This would significantly cut health care spending over the next two decades – a time when America’s population will age and additional health care services will be more necessary than ever.

Putting less money in the hands of doctors, hospitals, and other health care providers means they’ll have less to spend on expanding services, rebuilding old facilities, buying new medical equipment like MRI machines, and on investing in innovative new technologies.

This also means there will be fewer providers to treat patients, forcing people to wait weeks and in some cases months longer than they do now to see specialists.

This problem would be made even worse by the fact Warren’s proposal would do nothing to substantially increase the number of health care providers available – while expanding access to services for tens of millions of people.

These problems aren’t theoretical. In countries like Canada, where government effectively runs the health care industry, patients wait much longer to see specialists than they do in much of the United States.

The Canada-based Fraser Institute reports the average Canadian patient waits about five months from the time he or she sees a general practitioner to the moment he or she receives treatment. That’s more than double the wait Canadian patients experienced in 1993. In some parts of Canada, patients wait months more for treatment.

The bottom line is that if Elizabeth Warren has it her way, Americans will undoubtedly suffer because there will be fewer and lower-quality health care services available to them. In some cases, people will die who would otherwise have been able to receive the care they needed.

The current health care system is unquestionably flawed and in need of major reforms, but significantly cutting health care services and providers and putting the federal government – which can’t even run existing agencies properly – in charge of all health care will only make things much worse.