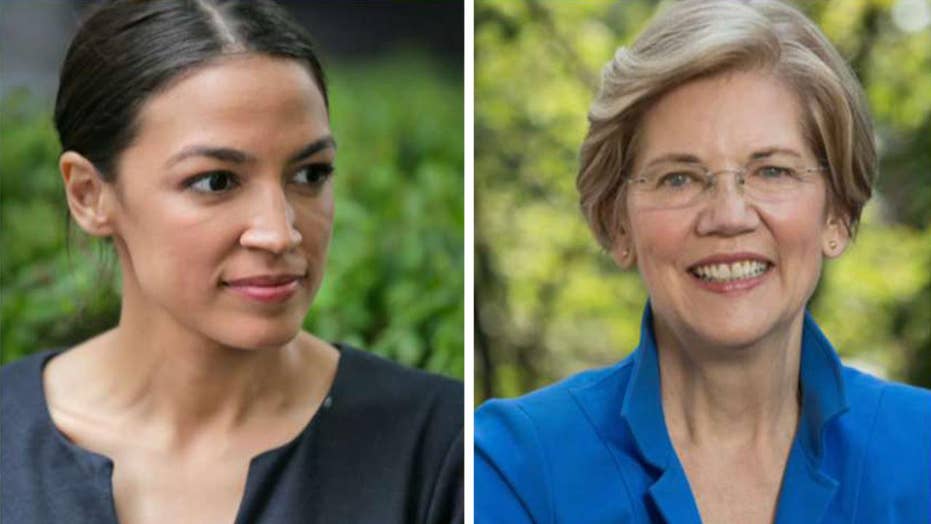 Socialist Rep. Alexandria Ocasio-Cortez, D-N.Y., has moved from the loony left to “The Twilight Zone” with her latest nutty plan to achieve her impossible dream of turning America into a socialist utopia.

In reality, the congresswoman’s plan would bring about a national nightmare – not just for all of us alive today, but for future generations – because it would destroy the U.S. economy. Building it back up would take a very long time.

Ocasio-Cortez labels her absurd plan A Just Society. If you regret not being born early enough to enjoy the fun times of the Great Depression, or want to live in a “workers’ paradise” like North Korea, Venezuela or Cuba, you’ll love Comrade AOC’s plan.

Incredibly, this cockeyed plan has been praised by one of the leading contenders for the Democratic presidential nomination – Sen. Elizabeth Warren, D-Mass.

“It's going to take big, structural change to tackle poverty and inequality in the U.S., and @AOC's ‘A Just Society’ is just the type of bold, comprehensive thinking we'll need to get it done,” Warren recently tweeted.

Like her Green New Deal and other wacko plans, Ocasio-Cortez’s latest attempt to fundamentally transform the United States into a bastion of Marxism would end up erasing the tremendous economic growth Americans have experienced not just under the Trump administration, but throughout American history.

Ocasio-Cortez says her legislation, which is composed of several different bills, would “combat one of the greatest threats to our country, our democracy, and our freedom: economic inequality.”

There aren’t enough rich people to pay for AOC’s grandiose plans, even if government confiscated all their money and left them penniless and homeless.

That’s right, folks, you can forget about terrorism, trade wars, America’s $22 trillion debt, skyrocketing health insurance costs and every other significant problem facing the country. Apparently, the real threat to Americans’ health and welfare is that Amazon head Jeff Bezos has too many billions of dollars in investments and Bill Gates – the world’s most generous philanthropist – owns too many houses.

The Just Society plan would solve America’s alleged wealth gap “problem” by – surprise – dramatically expanding the power of the federal government and its welfare programs and running up tens of trillions of dollars in new debt in the process.

There aren’t enough rich people to pay for AOC’s grandiose plans, even if government confiscated all their money and left them penniless and homeless. Like a credit card bill that keeps growing, at some point Ocasio-Cortez’s trillions of dollars in massive new spending would have to be paid for – meaning gigantic tax increases for all of us, our children, grandchildren and beyond.

The most important part of the Just Society proposal is that it would substantially expand the meaning of “poverty” so that potentially tens of millions of additional Americans would be considered legally impoverished and made newly eligible for numerous welfare programs. These include the Supplemental Nutrition Assistance Program, more commonly referred to as food stamps.

You know the old saying that there’s no such thing as a free lunch? Comrade AOC would hand out free breakfasts, lunches and dinners, among many other free benefits. Perhaps the Tooth Fairy, little elves living in trees, or space aliens landing in Area 51 would foot the bill.

Ocasio-Cortez’s Recognizing Poverty Act would direct “the Department of Health and Human Services, in collaboration with the Bureau of Census and Bureau of Labor Statistics, to adjust the federal poverty line to account for geographic cost variation, costs related to health insurance, work expenses for the family, child care needs, and new necessities, like internet access.”

As Matt Weidinger of the American Enterprise Institute notes, a 2018 report found that if the standard used in Ocasio-Cortez’s legislation were applied to the residents of New York City, roughly 40 percent of all households would be considered impoverished, compared to only 14 percent under the current standards.

Altering the poverty line in accordance with Comrade AOC’s legislation would also push tens of millions of people onto the Children’s Health Insurance Program and Medicaid, among other programs.

In some cases, people would effectively have no choice but to be forced onto the government dole. For example, many of the families now receiving health insurance subsidies to purchase insurance plans in ObamaCare exchanges would suddenly become eligible for Medicaid and would no longer be able to have access to those subsidies. This would require them to choose between enrolling in Medicaid or paying the much higher, non-subsidy ObamaCare price for private insurance.

There are already more than 72 million people enrolled in Medicaid and the Children’s Health Insurance Program. The Just Society plan would increase those numbers dramatically.

But that’s just the beginning. The Just Society proposal would also prevent government agents from denying convicted criminals access to federal welfare, health, disability, education, and other government social and welfare benefits on the basis of their conviction – regardless of how serious the offense was.

The same would be true for immigrants who are residing in the United States illegally. Under Ocasio-Cortez’s plan, immigration status cannot prevent welfare eligibility, giving millions of people now here in violation of federal law access to taxpayer-funded public benefits.

This one provision alone could destroy the American economy, because it would likely encourage millions of people from around the world to come to the United States to receive free services we have no way of paying for.

And, of course, Ocasio-Cortez doesn’t believe in immigration restrictions. Imagine tripling, quadrupling or further increasing the U.S. population with people from around the world looking for “free stuff.” How could the rest of us support them all?

Does forcing Americans to pay for food stamps and health care for non-Americans and college education for violent offenders sound “just” and “fair” to you?

The U.S. economy is better now than at any time in recent memory. Unemployment is low for virtually every demographic, the stock market continues to remain at near-historic highs, and there are more than 7 million job openings.

I guess all that is considered “unjust” by Comrade AOC. Under her grand plan we’d all be equally impoverished, equally overtaxed, equally dependent on government assistance, and equally suffering in a socialist hell.

The Just Society is anything but. It should be rejected by every American with even an elementary school-level knowledge of how our economy works.