Will Democrat Joe Manchin defect to the GOP?

Over the past two months, as disarrayed Democrats have haggled their way through bungled negotiations over their massive spending proposals, Joe Manchin has emerged, for many, as the adult in the room.

Progressive Democrats are furious that the West Virginia senator won’t let them spend $3.5 trillion dollars the country doesn’t have in the reconciliation bill. Some view his hold out status as heroic. Not so fast.

Manchin is not some moderate hero for only wanting to spend $1.5 trillion dollars the country doesn’t have. He's a modern-day progressive wolf hiding under the sheep's clothing of his 'moderate' moniker.

Let’s remember, shall we, that Manchin’s "moderate’ proposal is on top of a bipartisan infrastructure bill costing an addition trillion dollars. All in all, he wants the government to spend two thousand, five hundred billion dollars on new programs.

The senator from the Mountain State claims he is worried about inflation, saying this week, in regard to recent spikes, "we are finding out it might not be transitory."

So, shouldn’t his top line number be going down, as in way down? 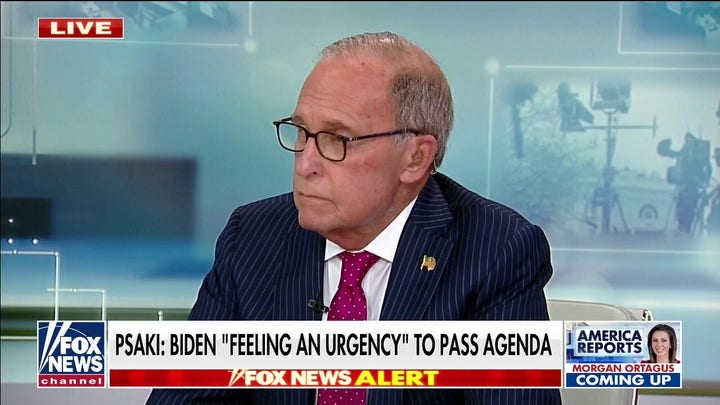 Manchin’s recent actions are not principled, they are pragmatic and political. Even he seems confused about who he is. Last week, asked about reports he was considering switching party affiliation he flat out called it "Bullsh!t," now this week he says, he doesn't know "where the hell I belong."

'MANCHINATIONS' THE CENTER OF ATTENTION ON CAPITOL HILL

This is not a John McCain thumbs down moment, Manchin is not sticking it to his own party. He is trying to please just about everyone and making a massive mess of it.

The one group of people he doesn’t seem to be trying to please are the voters of West Virginia. The state went for Donald Trump in 2020 by 40 percentage points.

It seems rather unlikely that the voters there support massive spending that Biden likes to compare to the New Deal. Arguably, helping to bring about the bipartisan infrastructure deal is why he was sent to Washington. But rubber stamping an additional $1.5 trillion for a progressive wish list is decidedly not.

His defenders argue that he is compromising with the progressives, bringing down their offer of $3.5 trillion. But is this 'moderate' senator much better than these far-left politicians behind the scenes?

Given the current conditions in the United States this is the equivalent of negotiating with economic terrorists. Instead of driving the economy off a cliff at 100 miles an hour, he seems satisfied getting there at a more leisurely 50 or 75. But make no mistake, the car still goes off the cliff.

Should Manchin get his way on $1.5 trillion in additional spending it will not be cause for a sigh of relief. He will be putting his signature on a huge tax and spend program at precisely the moment when the nation can least afford it.

If Manchin is really the moderate he plays himself off as to West Virginia voters he should be urging Biden to scrap the whole thing. But in a pure display of party over principle he is not inclined to do that.

This is how the Democrats operate these days, first they say "defund the police," and when the American people say that’s crazy, they compromise with "reforming the police" as crime surges. They start with no new gas cars by 2030, then compromise with only half of new cars can be gas powered by 2030.

It’s a cynical play in which Manchin plays a leading role, giving cover to policies that are  just a little less socialist than progressives want, but socialist nonetheless.

Conservatives and actual moderates should see through this game.

No, Manchin is not a hero, he is a tool of the far left and that is exactly how he should be considered and treated.