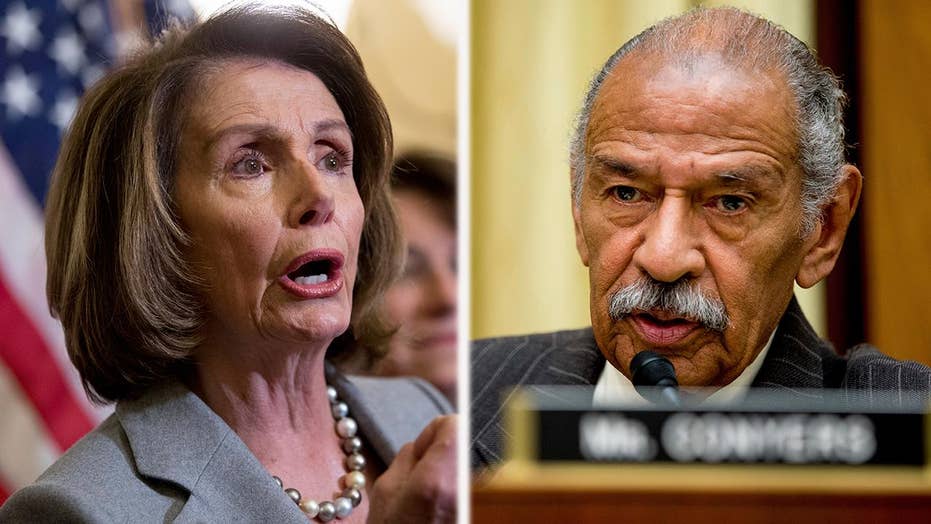 Pelosi changes tune on Conyers: He should resign

We all wanted to see more bipartisanship in Washington and it looks like we’ve finally got it.

For those of you following the Conyers saga – and the sexual misconduct saga more generally – you already know that Pelosi bungled her response to allegations against the 88-year-old Conyers just a few days ago.

On “Meet the Press” on NBC Sunday, Pelosi said that Conyers – who is the longest-serving current member of the House, holding his seat since 1965 – was an icon in America. The top-ranking woman in Congress tossed aside the very credible accusations against Conyers by multiple women, who she had never met.

It’s good to see that Pelosi has finally arrived at the place she should’ve begun. This is the right decision for moral and ethical reasons, but also for political reasons.

The outrage was swift, from both sides of the aisle. Pelosi walked it back later that afternoon, saying that no matter how great a person’s legacy, “it is not a license for harassment.” The next day, Pelosi met Melanie Sloan, who worked for Conyers years ago.  Pelosi then said she believed Sloan’s allegations against Conyers.

There’s more to Conyers’ story. He used his office funds to settle a sexual harassment suit – your tax dollars hard at work. He should resign on the basis of this alone.

Conyers didn’t even use funds from the Congressional Accountability Act, which taxpayers pay for so that our representatives can harass and discriminate and then cover up their actions. You and I foot the bill for these settlements, but we never know what happened. This better be fixed, pronto.

It’s good to see that Pelosi has finally arrived at the place she should’ve begun. This is the right decision for moral and ethical reasons, but also for political reasons.

There’s a lot more at stake here than Conyers’ career. For Democrats, every moment that there is any equivocation on the fate of Conyers, another voter in the Dec. 12 special election for U.S. Senate in Alabama becomes more convinced that it’s OK to back an alleged child molester.

Alabama Republican candidate Roy Moore has been accused by eight women of sexual misconduct in years past, including one who was a 14-year-old girl at the time of the alleged incident.

Voters will conclude that “they’re bad on both sides” if they believe all male politicians treat women badly. And I can imagine a lot of voters saying:  “Moore is a terrible guy, but we need more conservative judges. I’m obviously against child molesters, but it’s just allegations at this point.”

Now you may be wondering why I’m not lumping Senator Al Franken, D-Minn., in the same boat as Conyers. He, too, has been credibly accused of sexual misconduct and has even admitted to one of the incidents – which was caught on camera, when he posed with his hands on the flak jacket over the breasts of the sleeping Leeann Tweeden. Tweeden, who said Franken also forcibly gave her an unwanted kiss, accepted his apology.

I see something fundamentally different in what Franken did and is accused of doing. And I’m not alone. You’ll notice there isn’t nearly the same outcry about his actions or calls for his resignation.

There are some standouts like Rep. Kathleen Rice, D-N.Y., who has also called for Conyers to resign. She was a leading voice for a leadership change earlier this year and has been on the forefront of criticizing Pelosi for her management of this crisis.

Rice’s stance is that there needs to be accountability for politicians like there has been in the private sector. Washington shouldn’t be a safe house for men who abuse women.

I wouldn’t quibble with that and a majority of Americans would agree. There can’t be a different set of rules for elected officials.  Hopefully, the House will rectify that.

However, we run into dangerous territory when we throw everyone out, no matter the seriousness of offense. There are differences in what each of these men has allegedly done, and we can’t have the same punishment for each.

Maybe that means that I’ve got to give Franken up. A sacrificial lamb for a better tomorrow, as it were.

Check back with me in a day.