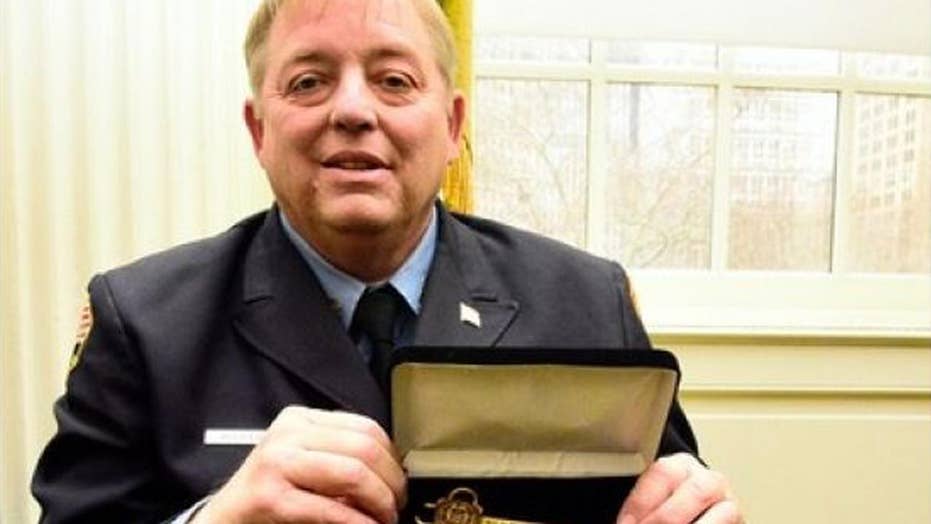 Our friend Ray Pfeifer passed away Memorial Day weekend.  It wasn’t sudden. He knew it, we knew it. Everyone knew Ray would die of cancer. What was different is Ray’s cancer came from saving others – something he spent a 29-year career doing as a member of the Fire Department of the City of New York.

On September 11, 2001, our country was attacked. New York City was the target, along with Washington, D.C. Thousands of people died that day in lower Manhattan; 343 of them were firefighters.  Ray and my husband Sean worked together at Engine 40/Ladder 35. They lost 12 of their men that day. For many of them, their remains were never found. Hundreds, if not thousands, of firefighters and other emergency workers worked day and night on the pile sifting through debris, glass, breathing in toxic fumes trying to find their lost brothers. Ray did it for eight months.

Ray’s cancer was diagnosed eight years ago. It was later attributed to his time on the pile. More and more men and women were coming forward with symptoms. Doctors knew this wasn’t just “normal” cancer.

After the Twin Towers fell, a layer of dust and debris covered Manhattan. Hidden among that cloudy air, inhaled by survivors and first responders alike, were carcinogenic particles and chemicals—asbestos, fiberglass, mercury, and benzene, among others.

Starting in his kidneys, the cancer spread everywhere in Ray. It eventually took his leg, and in April, Ray was transferred to hospice care, suffering from brain cancer, with cancer in his nodules, lungs and adrenal glands. Ray says he was one of the lucky ones. His friends, he said, were murdered on 9/11, but in the years he was alive after that, he got to watch his kids grow up.

Ray Pfiefer was a presence. I don’t remember the exact day I met him, but I felt, as many do, that I always knew Ray. My then boyfriend, now husband, Sean, brought me by the firehouse a few times when we first started dating. Ray was the one guy you couldn’t resist (all the guys knew this) – quick to joke, easy to talk to.  So kind.  People gravitated towards him.  He owned the room when he walked in, and incredibly, he could disappear when no one expected it. He called it the Irish goodbye. The guys called it “the Ray.” You could be having a conversation with Ray, beer in hand – turn to look away for a moment and he was gone.

My favorite memory of Ray was around a decade ago.  I was living on the Upper West Side and I was walking home on a sunny warm NYC day. I was crossing W. 66th Street when I noticed a commotion.

There was a crowd of people gathering near the crosswalk. My eyes scanned the area to see what was happening.  I saw a fire truck, then noticed a familiar face. Actor Tony Danza was at the corner of 66th and Broadway – likely coming out of a TV show taping.  Wow – Tony Danza, I thought.  I was fairly new to New York so this was considered a celebrity sighting. But people weren’t looking at him.  People were gravitating toward the fire truck. I looked past Tony Danza and noticed people were yelling a name. RAY! RAY! Hey, Ray! Lo and behold it was Ray Pfiefer. I later found out he was checking on some of his friends who had been dispatched to an earlier fire.

The crowds were circling around Ray. And I realized at that moment Ray Pfeifer was my New York celebrity sighting (no offense, Mr. Danza). I waved and called out his name.  He came over and gave me a hug.  This was before he found out about the cancer that was spreading inside of him.

When Ray found out he had cancer, his mission became not only to beat it but to raise awareness in Congress that people like him – those who did not die on 9/11 but who would eventually die from the effects – needed to be cared for. The evidence was piling up just like the toxic waste these guys sifted through after the dust settled on that fateful day.

More than 5,400 people diagnosed with cancers linked to the 9/11 attacks were enrolled in the Centers for Disease Control and Prevention’s World Trade Center Health Program as of June 30, 2015 – triple the number who’d enrolled since January of 2014. And of those 5,400, close to 4,700 of them are emergency or first responders, cleanup workers or volunteers who worked at the World Trade Center, Pentagon or Shanksville, Pennsylvania sites following the attacks. Almost half of them were diagnosed between the ages of 55 to 64. Ray was 59 when he died.

Knowing this, Ray took the lead. He banged on doors. He called members of Congress. He steamrolled his wheelchair to Capitol Hill to stop leaders in the hallways and tell them they needed to help. There would be no Irish goodbye. He would be kicking and screaming until they did something to extend the Zadroga act – a law that guarantees medical care for 9/11 first responders. Ray earned a key to New York last year for his dedication to getting that job done.

And during the last few months of his life, Ray wanted to have his name and other first responders who died from 9/11-related illnesses placed on the FDNY's main Wall of Honor – the wall containing the names of the 343 FDNY members who died during the 2001 terror attack.

Ray said that he was being poisoned and dying a slow death because of terrorism.

Ray ended his fight with cancer on Sunday – the day before Memorial Day. One of Ray’s last wishes was to visit the Tomb of the Unknown Soldier at Arlington National Cemetery. His wish was granted in March.

Ray liked to message me often during Fox & Friends – a show he loved to watch. Sean told me last week that the end was coming, so I sent him a picture of my family at my son Matthew’s first communion that simply said “We love you Ray.” He texted back a thumbs up.  It was the last I heard from him. On Sunday my husband was given the news.

“Ray’s gone” he said quietly. One last Irish goodbye. The lump in my throat is still there. We all knew it was coming, but it didn’t make the news easier.

Ray’s legacy will last longer than any of ours will. He will be remembered for fighting cancer and fighting to keep others alive.  A true Firefighter. Last man out. Save as many lives as you can.  Even if it means losing your own.

God Bless you, Ray, our friend. A hero. You will never be forgotten.