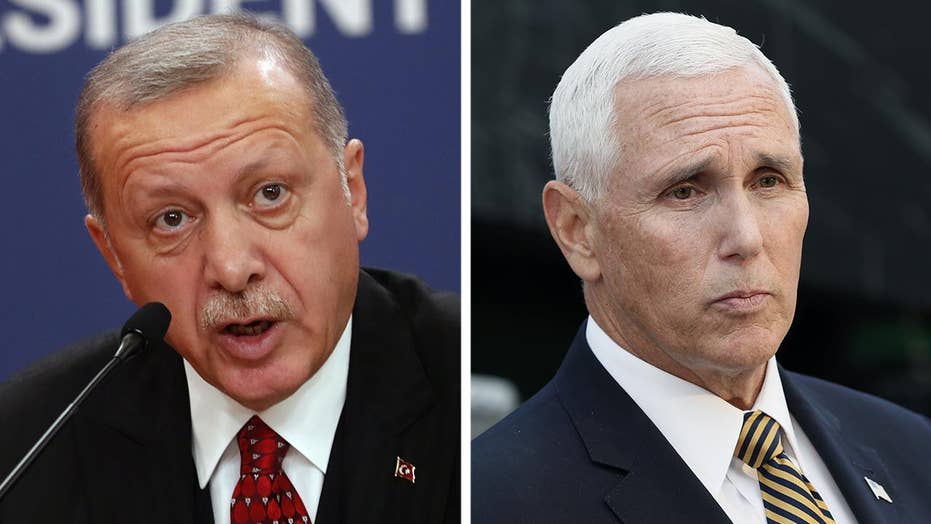 Vice President Mike Pence, Secretary of State Mike Pompeo and National Security Adviser Robert O’Brien showed they know how to talk Turkey when they announced Thursday that they’ve negotiated a five-day delay in the Turkish military’s advance into Kurdish-held territory in Syria along Turkey’s border.

The U.S. officials met for nearly five hours with Turkish President Recep Tayyip Erdogan in Ankara to reach the agreement. President Trump praised the deal, tweeting that “This is a great day for civilization,” after Pence announced the agreement.

The ceasefire is meant to give Kurdish forces time to make a peaceful, orderly withdrawal from the area, thereby establishing a buffer zone between them and the Turks.

Will it work? We’ll see. The worst-case scenario is that it doesn’t take. The best case is the deal leads to a long term arrangement that avoids needless bloodshed and brings more stability to a part of the world that desperately needs to be more stable.

This does not appear to be a case of Washington trying to put a Band-Aid on a self-inflicted wound. Early reports to the contrary, Trump did not OK the widely condemned Turkish incursion. Indeed, the administration spent months looking for ways to forestall it.

But when Erdogan unleashed the dogs of war, Trump’s initial public statements created a PR nightmare. In trying to make the best of the mess, he badly misstepped.

Trump’s actions, however, were completely appropriate. He was right to put the safety of U.S. troops first. It would have made no sense to keep America’s small military contingent caught in a crossfire between the Turks and Kurds. And he was right to try to mitigate the mess precipitated by Erdogan.

The cease-fire, if fire actually ceases, is far from a perfect solution. Even if Turkey manages to peacefully set up a buffer zone and move some refugees back to their homeland, this won’t come close to ending the Syrian civil war, nor will it secure the future of the Kurds in Syria. 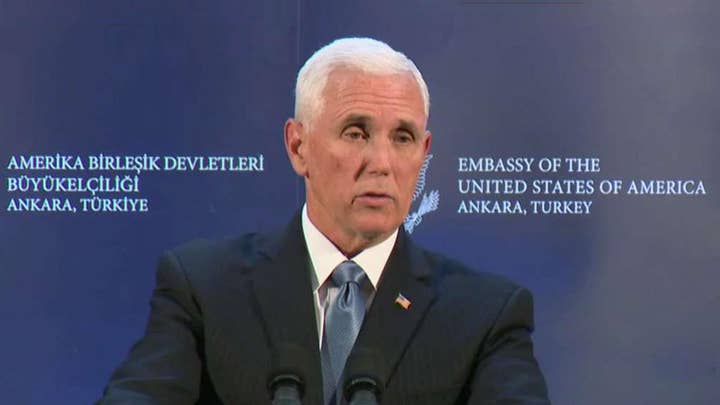 But the U.S. has used its limited influence and capabilities – judiciously and appropriately – to try to achieve something constructive.

The handwringing over the Turkish incursion has been understandable. It has displaced many civilians, caused needless suffering and precipitated unwarranted acts of violence. And none of that will change the status quo in Syria’s Civil War – a conflagration that has visited suffering and violence on that country’s people for more than eight years.

Syrian strongman Bashar Assad will not regain control of all of the country anytime soon. And, crazy predictions to the contrary, Russia will not gain a new launchpad into the Middle East.

The Kurds may withdraw, but they will remain a force to be reckoned with. Syrian strongman Bashar Assad will not regain control of all of the country anytime soon. And, crazy predictions to the contrary, Russia will not gain a new launchpad into the Middle East.

The Syrian regime has always been in Russia’s orbit. Moscow can’t really use its position there to expand its influence, nor is it likely willing to spend much more blood and treasure to win back more territory for Assad.

Russian President Vladimir Putin, in fact, seems content to fight to the last Syrian or Iranian, but not to put one more Russian on the front lines.

Iran, for its part, already has its hands full with a proxy war in Yemen and rising dissension at home.

Much has been made about a potential resurgence of ISIS’s so-called caliphate. Yet none of the parties to the conflict seem keen to see the terrorist state make a comeback.

The U.S. drawdown in Syria led some to assume it was the end of American influence – and the U.S. counterterrorism mission – there. But as we learn more about the Trump administration’s game plan, that assumption seems less and less valid. The U.S. has every intention of continuing to work with our partners to keep ISIS from making a comeback.

The U.S. isn’t leaving the Middle East anytime soon. Peace and stability in the region is still very important to America.  The chief threat to stability remains Iran. Only America can lead the effort to tame the regime, and it can’t do that by remote control from afar.

It is true that Trump doesn’t want to carry the load alone. He wants others to step up and take more responsibility. He wants more collective security and less American babysitting.

And Trump absolutely rejects the idea that America can or should be the arbitrator and solver of every problem, everywhere. In the end, the president wants a more restrained and sustainable presence. That’s a far cry from the America disengaging or becoming isolationist

If Trump wanted to walk away from the region he wouldn’t have bothered to send his A-Team to Turkey. He did so because he knows the U.S. can’t lead by not being there.

The cease-fire may not solve much but it demonstrates that America isn’t planning to walk away from its friend or its responsibilities.