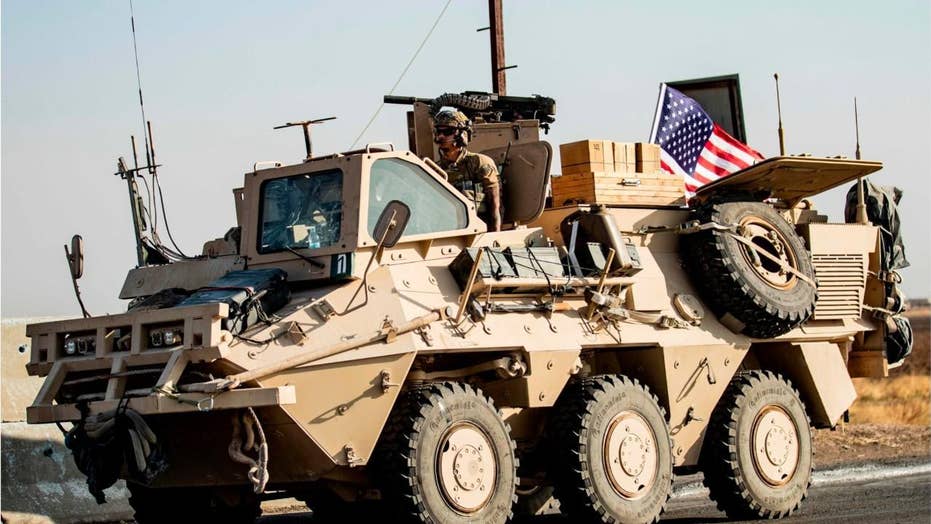 James Carafano: The Trump administration missed an opportunity with Syria

Lt. Col. James Carafano weighs in on the Trump administration's decision to remove troops from northern Syria and why the United States wouldn't have been able to prevent a Turkish incursion even if it wanted to.

Talk about déjà vu! President Trump’s response to Turkey’s incursion in Syria brings to mind his first meeting with Russian President Vladimir Putin in Helsinki. On both occasions, his words wrought chaos and confusion. Then, as now, he would have done himself — and the nation — a favor if he had acted more deliberately from the start.

If you’ll recall, Trump’s Helsinki press conference with Putin was hard to stomach. They joked around like fraternity brothers — a display completely at odds with U.S. policy, which has no patience for Putin’s record of destabilizing actions.

Afterwards, officials raced to reassure that American policies hadn’t changed. Trump’s display of camaraderie was his way of offering the Russians a diplomatic off-ramp, the same kind of familiarity he has extended to North Korea, China and even Iran. The intended message: He was willing to make nice, if they reciprocated by not impinging on U.S. vital interests.

JIM HANSON: TO HALT FIGHTING BETWEEN TURKEY AND KURDS IN SYRIA AND PREVENT RETURN OF ISIS, US MUST DO THIS

Now we have the president’s tweets over Syria, which certainly seemed to greenlight the Turkish incursion. Much like the Helsinki press conference, they provoked confusion and outrage, leaving a lot of clean-up work to be done.

That process is underway. The president has warned Turkey that sanctions are likely and dispatched the vice president, secretary of state and national security adviser to the region. The administration also announced that it would maintain some military presence in Syria as it presses for a ceasefire between the Kurds and the Turks.

As the initial explosion of outrage settles, it now appears that the administration never did greenlight the Turkish incursion. In fact, it advised Turkey against it.

The U.S. troop withdrawal was not to accommodate the Turks. It was simply a response to fast-unfolding events on the ground — the most expeditious way to get them out of the middle of a shooting war between the Turks and Kurds.

That fight clearly serves no U.S. interests. Moving our troops out allows them to continue to address other American concerns in the region: keeping ISIS from rebounding, blocking the expansion of the Iranian threat, and stemming another destabilizing flood of refugees.

Yet none of this was apparent from Trump’s initial response to the crisis.

What the occasion really called for was a sober speech from the Oval Office explaining to the American people how we got where we are; what was going on; and what he would do to protect our interests. It’s something Trump has shown he can do, yet he did not. Why?

On the public stage, there are two Donald Trumps. The first is the "showman." His outsized personality, his ability to explain in a terse, irreverent style, connects well with many Americans. It’s what won him the election and what, in part, keeps his popularity ratings steady despite incessant attacks by critics and a hostile media.

The other Trump is the serious Trump — the leader who makes big, bold decisions that are good for the country: pushing for tax cuts, cutting regulations, standing up to China, and protecting vital U.S. interests abroad. That kind of leadership is another reason why his popularity has held.

But the Helsinki and Syria incidents show the problems that arise when the president conflates the two Trumps.

In response to Turkey’s announcement that it was going after the Kurds, Showman Trump blurted out that he has no interest in “endless wars.” Well, of course not. Who does? That phrase is just empty rhetoric. Without elucidation, it — like another presidential catchphrase, “America First” — doesn’t tell us much about actual U.S. policy.

When the president first tweeted his response to Turkey, many of his supporters cheered, implicitly trusting him to do the right thing. But most Americans — and many of our friends and allies — were befuddled. And that’s on Trump.

Trump is the president of all Americans and the leader of the free world. On matters of great seriousness that affect all of us, we need to hear the serious Trump.

We’ve heard him before. Serious Trump gave a powerful addresses when announcing our withdrawal from the Iran nuclear deal. He did it again when announcing that U.S. forces would remain in Afghanistan. He’s given powerful speeches in Warsaw and at the United Nations.

He should have given another one last week.

This is a lesson that President Trump must learn and remember. Others will rise up to test America’s resolve. They will challenge our interests. They will threaten our peace, prosperity and security. Trump, like any good American president, will stand and protect. In times of grave trouble he also needs to speak to us — not tweet at us.