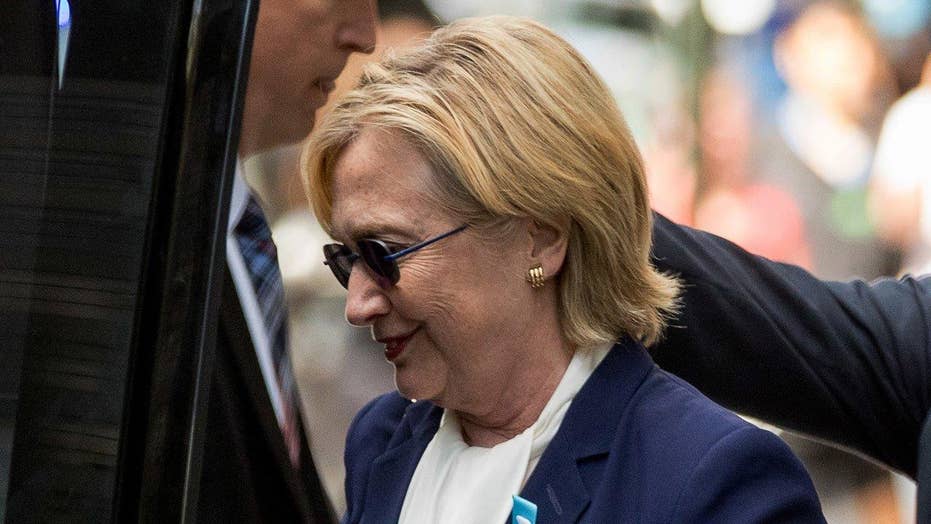 Azar said that Trump’s exam “left nothing out there we don’t know” about his current state of health.  The interviewer pressed her to opine on who was the more physically fit candidate. Azar seemed uncomfortable with the question but finally allowed that, based on “objective” criteria, it would probably be Hillary.

That is true, at least in one sense.  Clinton (who, like me, was born in 1947) is sixteen months younger than Trump. All else being equal, age is a predictor of medical disability or death.

Unfortunately for her, all else isn't remotely equal, at least not in the political equation.  Trump’s medical condition was never an issue.  He looks strong as an ox. The results of his exam merely confirmed what everyone assumed.  Unless he keels over in the next two months, the subject of his health is off the table.

If Clinton can recover from the setbacks of the past week, it will take deeds, not words. That means waging a demonstrably strenuous,dawn-to-dusk campaign, complete with real press conferences, barnstorming in Red State America and standing toe-to-toe with Trump on the debate stage.

Not so for Hillary. Her maladies, real and alleged, are going to be with her for the duration of the campaign. They will be on stage during three grueling presidential debates and present at every campaign appearance.  People will listen for strain in her voice, scrutinize her body language for signs of fatigue or dizziness, follow her every footstep. God help her if she coughs out loud.

It is hard to feel sorry for her.  She got caught lying about her health.  At this stage, she could pass a two-day check-up at the Mayo Clinic and a majority of the public would still think she had somehow fixed the results.

For months, Donald Trump has dubbed Clinton “Crooked Hillary,” in reference to her email scandal and much-too-close relationship to the Clinton Foundation during her tenure as Secretary of State.  Her collapse at the 9/11 ceremony, after having sworn up and down that she was just fine, just a little seasonal allergy,  has invested Trump’s epithet with new (and videotaped) evidence that she is an untrustworthy woman.

The word “woman” is relevant here. Clinton’s supporters routinely allege that she is subjected to a double standard because of her gender. Often that is false—certainly in the case of her gentle treatment by the media. But on the question of her health, it is very true.

Long before Clinton contracted pneumonia, Donald Trump was denigrating her as “too weak,” and “lacking in energy and stamina.”  This is barely coded language, meaning: The presidency is man's work, little lady.

Trump’s defense is that such talk isn't sexist because he said similar things about some of his male opponents in the primaries. But that was code too.  Back then he was implying that Jeb Bush and Marco Rubio were unqualified because they lacked his fabled testosterone.

Obviously Trump can’t accuse Hillary of that. But he is creative. Lately, for example, he has been observing that Clinton just doesn’t look like a president (as if he does).

Hillary and her supporters will keep calling Trump out on his sexism, but they need to understand that he is not vulnerable to shaming. He says what he wants to say the way he wants to say it. If recent polls are correct, an increasingly large number of voters (women as well as men) like what they hear.

If Clinton can recover from the setbacks of the past week, it will take deeds, not words.  That means waging a demonstrably strenuous,dawn-to-dusk campaign, complete with real press conferences, barnstorming in Red State America and standing toe-to-toe with Trump on the debate stage.

Unfairly or not, on the subject of her health the burden of proof is on Hillary. She has to convince the public that, at 69 years old, she is neither too infirm nor too elderly to be president. I wish her luck. After all, we are the same age.