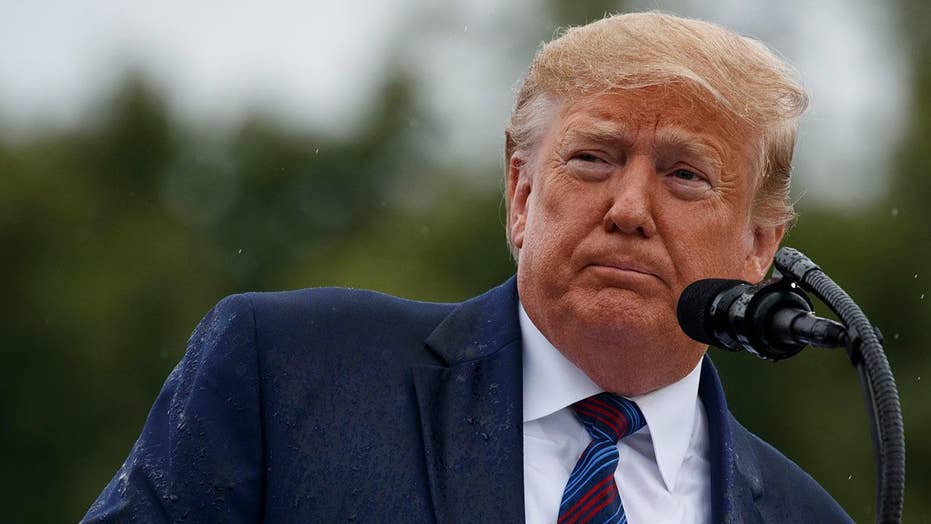 The Hill says the looming impeachment battle poses a 'wildcard' for the Trump economy; reaction and analysis on 'Outnumbered.'

Let us assume for a moment — against all common sense — that President Trump plotted to withhold military aid to Ukraine in exchange for assistance in investigating possible wrongdoings by former Vice President Joe Biden. Such an action, if somehow proven accurate, while not expressly illegal, would in my view show a lapse in judgment and would be a mistake. But such an act doesn't come close to warranting impeachment and removal office.

Don’t be fooled for a second. Democrats know this and don’t care one bit. Their motivation to damage Trump in the 2020 election trumps all else. But who said any of the left’s attacks to brand Trump with the scarlet "I" of impeachment are rational, anyway?

Then again, rationality and leftist politics are not a combination you see very often these days.

STEVE HILTON: WHAT THE IMPEACHMENT INQUIRY OF TRUMP IS REALLY ABOUT

You don’t need to have a Ph.D. in mathematics to understand that Democrats have no chance of gathering the 67 votes in the Senate to get a conviction against Trump, since that would require the support of 20 Republican senators.

Impeachment sounds impressive, but Trump will surely wear it as a badge of honor, giving him and his supporters even more momentum to press on, likely fueling the GOP to victory across the country in 2020.

Common sense would suggest that Democrats would have learned the golden rule of modern-day politics by now: Anything that doesn't hurt Trump only makes him stronger. And don’t ever give him an enemy or target to go after. It’s like giving Popeye spinach.

The left simply can’t stand the fact that Trump won the battle of ideas during the 2016 election thanks to strong support from the American people. They can’t stand the fact that millions of Americans took their collective rage against ideas such as open borders, never-ending wars, ObamaCare, punishing taxes, and regulations and channeled it into a political newcomer who clearly would not follow Washington’s political playbook. In fact, he lit it on fire.

But the ruling class had firehoses at the ready. When Trump tried to drain the swamp, the swamp pushed back and tried to drown him instead. Feeling threatened, Democrats invented controversy after controversy to smear him, to belittle him, to destroy him — even going so far as to call him an agent of a foreign power, wasting two years of our time and spending millions of dollars in the process.

If common sense won’t stop the Democrats from wasting months of the nation’s time and energy once again, what will? Shouldn’t their own history with the impeachment process serve a lesson that Republicans learned all too well at a great cost?

Here is where the sad story of former President Bill Clinton could do the Democrats some good for a change. All the left needs to do is look back a little more than 20 years ago for an example of a truly impeachable offense, and see that despite all the evidence — such as lying to a grand jury and lying repeatedly to the American people — Clinton was not convicted by the Senate after being impeached by the House.

History cries out with its guidance, telling anyone who stops to listen that impeachment should never be used unless you have the votes for conviction — plain and simple.

Take this a step further. How can we even begin to consider wasting our collective national attention on what amounts to guessing intent on a phone call and attempting to remove Trump from office for such nonsense? This is especially true considering we did not remove President Clinton for conduct that was much more serious.

Consider for a moment what Clinton did. We're not just talking allegations. We're talking about proven facts. Not only did he lie in a sworn deposition during the Paula Jones case. He lied time and time again to the American people, saying he did not have an affair with Monica Lewinsky, a White House intern who suffered immensely because of Clinton, as did many others.

The law was clear, the evidence sound and the accused clearly guilty — but there was no removal from office. Republicans tried and failed to get the necessary votes in the Senate to oust Clinton, landing nowhere near the two-thirds majority needed. They forgot that it was not some criminal prosecution in your average court of law. It was very much a public battle where opinion, congressional majorities and the rise of the Internet outweighed all else.

Impeachment, at its core, defies the normal standards of right and wrong, with a bar intentionally set high thanks to the wisdom of our Founding Fathers. Clinton benefited from it.

Unfortunately, we seem destined to once again go down the path of an impeachment process that will only make the accused even stronger politically. Just like Republicans suffered at the polls during the 1998 midterms, it seems Democrats will pay a serious price in 2020.

They only have themselves to blame. A pity.

But they can’t say they weren’t warned.