Tesla claims the Model S Plaid is the world's quickest car and that the $129,990 sedan can accelerate to 60 mph in less than two seconds.

"We need plug-in hybrids!" a young Leftie once chirped at me after I addressed students on his college campus.

"OK," I asked. "When you go home and plug your car into the socket in the garage, where do you think that electricity comes from?"

DEROY MURDOCK: DEMS' DEFUND POLICE POLICIES - INSTEAD OF DEFLECTING BLAME TO GOP, HERE'S WHAT THEY SHOULD DO

He stood there in silence for a couple of seconds and then slowly dropped his head in grief. Like a crystal punchbowl that crashed onto a marble floor, his pristine eco-dreams suddenly were shattered. It was clear that this idealist never had asked himself how electricity gets into the wall socket. 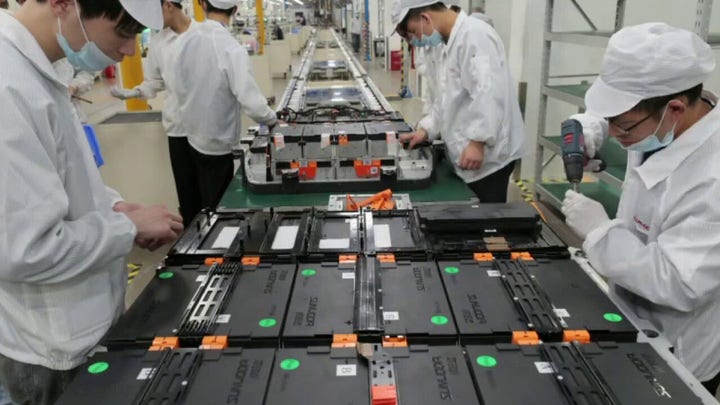 Those who oppose the energy status quo have given little apparent thought to this, as they try to re-build American society on a foundation of daydreams. In a sense, this is too bad. Life would be so easy if everyone lived in the Democrat-Left’s Green’s Fantasyland. In that carefree place, tough questions about electric cars go unasked.

Those who oppose the energy status quo have given little apparent thought to this, as they try to re-build American society on a foundation of daydreams. In a sense, this is too bad. Life would be so easy if everyone lived in the Democrat-Left’s Green’s Fantasyland. In that carefree place, tough questions about electric cars go unasked.

How would life look for e-car drivers trying to escape hurricanes?

Imagine that Hurricane Dave is churning through the Caribbean. The furious Category-Three storm is barreling toward Miami and forecast to roar northward and wreak havoc on America’s state of paradise. Some models show Dave trashing Florida’s Atlantic beach cities. Others envision 120-MPH winds ravishing the Gulf Coast.

The safest bet is to flee Miami, speed as far away as possible, and perhaps make a sharp left into the Panhandle and toward Alabama.

The 347-mile drive from Miami to Jacksonville exceeds today’s median range for e-cars, whose batteries die after 259 miles.

Imagine tens or even hundreds of thousands of Miami-area e-drivers pulling over on the side of Interstate 95 near Daytona Beach to replenish their batteries. Most would find charging stations shambolically oversubscribed. Those lucky enough to plug in would have to sit still while powering their batteries, devouring two or more hours for many models.

Meanwhile, Dave spins his deadly pirouette with mounting menace, growing closer by the minute — and angrier, too. While these e-cars sip voltage, Dave has grown into a 140-MPH Category Four tempest.

Of course, all of this begs another question: Where will e-car manufacturers acquire the scarce resources needed to build these vehicles and their batteries in the first place?

The inconvenient truth is that reserves of rare-earth elements — such as neodymium and dysprosium — are limited in the U.S. (which would require mining, which the Democrat-Left also hates) but abundant in China (which hates America).

And even if the finite supplies of these materials keep pace with soaring demand, this country would need to erect a slew of power plants to propel all of these electric vehicles — plus homes, offices, factories, and everything beyond e-cars.

Where will e-car manufacturers acquire the scarce resources needed to build these vehicles and their batteries in the first place?

Will the Democrat-Left and their Green comrades step aside and let entrepreneurs build solar farms, wind farms, and geothermal facilities or will they practice their usual policy of BANANA: Build Absolutely Nothing, Anytime Nor Anywhere?

Green groups have filed litigation to stop green projects. Enviro-wackos battled a solar-power plant east of San Diego. They complained about "industrial-scale energy development" and power lines atop 150-foot-tall poles that would deliver sun-driven electricity to local consumers. Perhaps the crazy Greens thought that the megawatts would arrive via WiFi. Or maybe they planned to say, "Alexa, please transmit a dozen MW to La Jolla."

Rather than attack the Democrat-Left Greenies for coming to the wrong conclusions on these matters, they can be forgiven for not even pondering them. The Green New Dealers rely on magic thinking: Wave the witch’s wand, and beautiful things just happen.