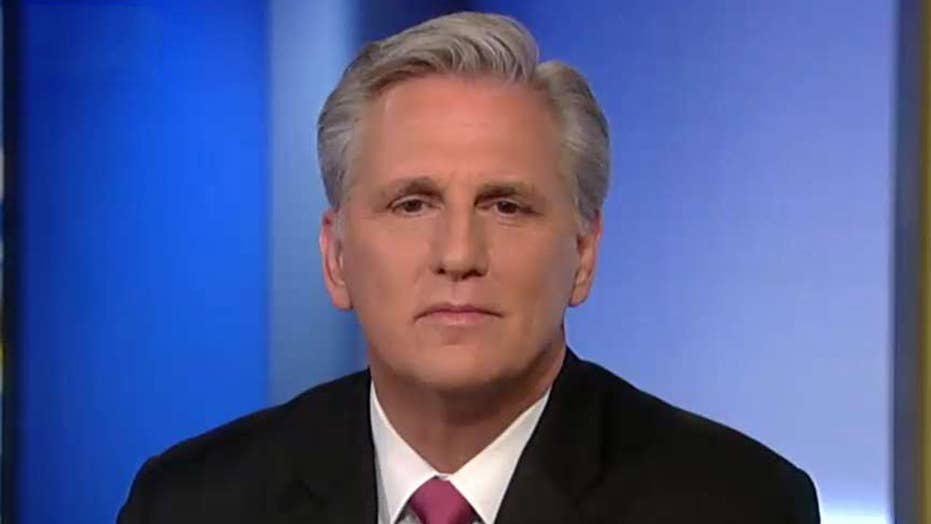 Since Donald Trump was elected president in November 2016, the Democrats’ strategy has been to oppose, resist and attack everything he says or does – regardless of how pathetic it makes them look. Look no further than the left’s reaction to the president’s order to eliminate Iranian general and terrorist Qassem Soleimani last week.

At a time when Americans should be rallying around their president and their flag to celebrate the world being a safer place because of Soleimani’s death, Democrats refuse to state the obvious.

The American people understand that killing terrorists is a good thing – something many Democrats used to agree with. But throughout the president’s first term, Trump Derangement Syndrome has ravaged the left at a disturbing pace and it’s showing no signs of letting up.

REP. ELISE STEFANIK: NANCY PELOSI NEEDS TO KNOW SHE HAS 'NO AUTHORITY OVER THE SENATE'

In the case of Trump, it’s clear the Democrats have dug themselves into a hole. Someone needs to tell them to stop digging.

Those on the left had an opportunity to say that the Soleimani strike was a sound decision, period. Instead, they doubled down. They decided to falsely accuse the president of overstepping his powers and claim he secretly wants to go to war with Iran. It’s insanity, plain and simple.

During his sober and reasoned address to the nation Wednesday, Trump made it clear – once again – that he doesn’t want war with Iran. The president even offered Iran’s leaders a way out of their troubles if they abandon their quest to develop nuclear weapons and change their evil ways.

One of the reasons Trump was elected president is that he doesn’t support the policy of endless wars in the Middle East. When Iran fired over a dozen missiles at military bases in Iraq where U.S. troops were stationed Wednesday, you could immediately hear war drums coming from the Washington establishment.

But the president stood his ground and laid out his Iran policy in a splendid fashion. Make no mistake about it – the left and its allies in the Trump-hating media very much want the president to start a war in the Middle East, so he can be just like their own presidential front-runner – Washington swamp creature and former Vice President Joe Biden. Biden voted in favor of war with Iraq in 2002 when he was a senator representing Delaware.

Biden’s pro-war past is just one obstacle Democrats are trying to navigate as they seek to avenge Hillary Clinton’s epic loss to Trump, the ultimate political outsider.

Another disaster in the making is House Speaker Nancy Pelosi’s decision to withhold her weak articles of impeachment from the Senate.

After lying to the American people for months about President Trump’s impeachment being an urgent matter of national security, Pelosi, D-Calif., has now sat on the two hyperpartisan articles of impeachment against the duly elected president of the United States for over three weeks and counting.

This inexplicable delay in allowing Trump a Senate trial has caused impeachment polling to dip to tragic levels for the unhinged Democrats. According to the latest Rasmussen survey, now only 12 percent of the American people believe President Trump will be removed from office.

So why is Pelosi holding up an impeachment trial? The real reason for the delay has nothing to with getting more witnesses to testify. As with every other calculation with the impeachment-crazed speaker, it’s all designed to defeat President Trump in November.

The theory that makes the most sense is that Pelosi doesn’t want there to be a quick trial in the Senate on the eve of the Iowa caucuses and New Hampshire primary. A swift acquittal by the Republican-controlled Senate would enrage leftist primary voters and perhaps give socialist Sen. Bernie Sanders, I-Vt., critical early primary victories.

The thought of a Bernie Sanders brushfire spreading state to state is a nightmare for the Democratic establishment and a scenario Pelosi must be trying to fend off. By delaying the transmission of the articles of impeachment until late January, Pelosi would force Sanders, Sen. Elizabeth Warren of Massachusetts, and other Democratic senators running for president back to Washington for the trial when they desperately need to be in Iowa and New Hampshire.

Furthermore, Pelosi’s decision to hold Iran-related presidential war powers votes in the House Thursday is nothing more than a clever way to buy some time to deal with her self-inflicted impeachment conundrum.

The biased left-wing media should be asking these questions of Pelosi, but they’re part of the disgusting anti-Trump conspiracy, so don’t hold your breath.

As the slow-moving Democratic train wreck worsens, Trump is out there fighting for the American people and winning big.

The economy is on fire and working for all Americans. The president is negotiating historic trade deals with China. He’s eliminating the worst terrorists in the world. And he’s building the wall we need on our southern border.

Democrats would have been wise to have worked with the president on some of these issues on a bipartisan basis, focusing on serving the American people. But instead of trying to solve our nation’s big problems in partnership with the president, the Democrats took the low road of political attacks.

The Democrats’ decision to oppose virtually all Trump-supported legislation on Capitol Hill has given the president and Senate Republicans the opportunity to focus on the judiciary – and focus they have. Since Trump took office, 187 strict constitutionalist judges have been confirmed by the Senate to the federal bench.

These startling numbers must keep Pelosi and Schumer up at night. If only they had worked on more legislation with Trump, there would have been less time for the Senate to approve all these Trump judges for lifetime appointments.

The strategy of opposing Trump at all costs as been a disaster for the Democrats and it’s paving the way to a monumental reelection victory for President Trump in November. Elections have consequences.