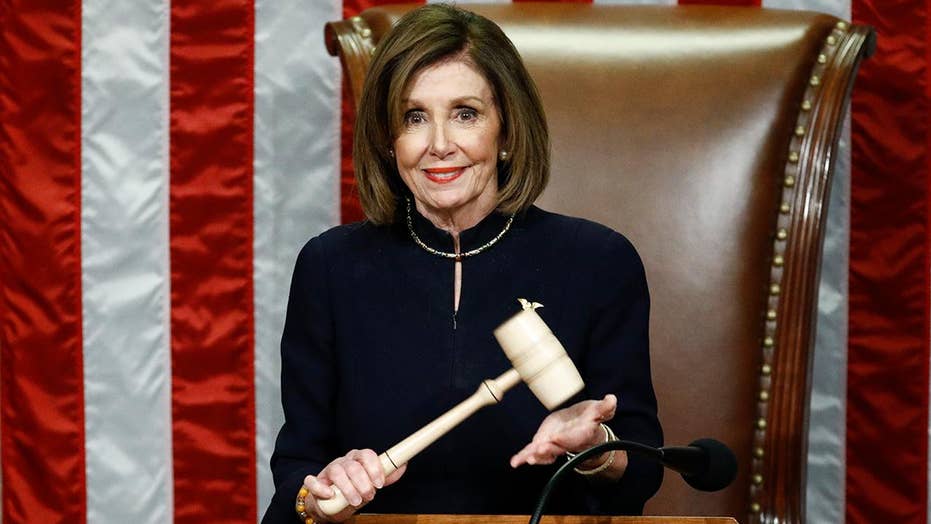 Unhinged Democrats led by House Speaker Nancy Pelosi brought great shame upon the House of Representatives and our country by voting Wednesday night to impeach President Trump simply because they can’t get over losing the presidential election to him in 2016.

Out of pure hatred for the president, Pelosi, Judiciary Committee Chairman Jerrold Nadler of New York, Intelligence Committee Chairman Adam Schiff of California and their caucus of do-nothing Democrats have chosen to further divide our country by advancing weak articles of impeachment to the U.S. Senate for a trial less than 11 months before the 2020 presidential election.

These Democrats suffering from Trump Derangement Syndrome have abused their power and disgraced their offices in exchange for what they see as some sort of sick short-term political victory.

TRUMP BLASTS CAROLYN MALONEY AFTER NY DEMOCRAT VOTES FOR IMPEACHMENT: 'GIVE ME BACK THE DAMN MONEY'

The left-wing Democratic hacks in Congress are meddling in the 2020 election because they know they can’t defeat President Trump fair and square in November with their pathetic presidential field.

President Trump wasn’t impeached for any high crime or misdemeanor, nor did he abuse his power in any way, shape or form.

The president held a routine phone call with Ukrainian President Volodymyr Zelensky while carrying out the foreign policy of the United States as our nation’s chief executive. He had every right to ask Zelensky whether the Obama-Biden administration was corrupt.

The sham articles of impeachment didn’t receive one Republican vote in the House – and with good reason. In fact, the only bipartisan votes were Democrats who voted against the most disgusting political witch hunt in our nation’s history.

Let’s remember the entire process was kick-started by an anonymous so-called whistleblower who was hidden away by Democrats so he couldn’t get questioned about reports that he is a registered Democrat who worked for the Obama-Biden National Security Council and was in contact with Rep. Schiff’s partisan staff before his phony complaint was filed.

The fake whistleblower is probably getting a deluge of congratulatory phone calls from Trump-hating Democrats around Washington, but the happiness will be short-lived because the public backlash is about to begin.

Democrats in the House who represent districts that President Trump carried in 2016 should not sign multiyear leases in Washington, because a whole lot of them are going to lose their seats in November.

The irresponsible votes of the Democrats to impeach President Trump were an attempt to nullify the votes of the 63 million Americans who cast ballots in 2016 to send him to the White House. This will be long-remembered by constituents who were sold a bill of goods in 2018 with false promises by Democratic congressional candidates about compromise and bipartisanship.

The American people see this entire concocted scam as a waste of time. Pelosi, D-Calif., and Senate Minority Leader Chuck Schumer, D-N.Y., have broken one promise after the next; they could have used these years to work with President Trump to fix our broken health care system, lower prescription drug prices, and secure the border.

Instead, the Democrats chose to tell the American people one thing and then do the exact opposite – like the typical politicians they are.

Now the impeachment process moves to the U.S. Senate, where there will be a trial controlled by the adults in the room.

Senate Majority Leader Mitch McConnell, R-Ky., has already said the process in the Senate will be different from the House because it will be fair, honest and afford President Trump due process rights.

Schumer is already talking out of both sides of his mouth – saying the House has a strong case while demanding additional witnesses at the same time.

Sadly, Schumer is trying to make the Senate into a Pelosi-inspired kangaroo court. Democrats in the House impeached President Trump based on testimony from the witnesses who already came forward. If the case is that strong, why do you need more witnesses, Sen. Schumer?

Now, 20 years later, Democratic Sens. Dick Durbin of Illinois, Dianne Feinstein of California, Patrick Leahy of Vermont, Patty Murray of Washington, Jack Reed of Rhode Island, Ron Wyden of Oregon and Schumer will have to explain why President Clinton’s criminal activity is not impeachable – but the alleged non-criminal activity in the case of President Trump is impeachable.

Thankfully, the American people are smart and see what the Democrats are doing. It’s called the politics of personal destruction.

The decision to use the power of impeachment as a political weapon is setting a dangerous precedent that will haunt every future president for decades.

Until now, the term impeachment carried massive weight because it was a measure that was deployed in the rarest of circumstances and only when absolutely necessary. Sadly, going forward that will no longer be the case.

Why should we doubt that impeachment is looming for the next president upon taking the oath of office?

Wednesday night radical House Democrats passed their only true policy agenda:  the impeachment of Donald Trump by any means necessary.

The U.S. Senate must now hold an impartial trial and acquit President Trump of these politically inspired charges so we can finally get this three-year witch hunt behind us.

Then it’s up to the American people to hold the Democrats accountable at the ballot box in November for their abuse of the system.