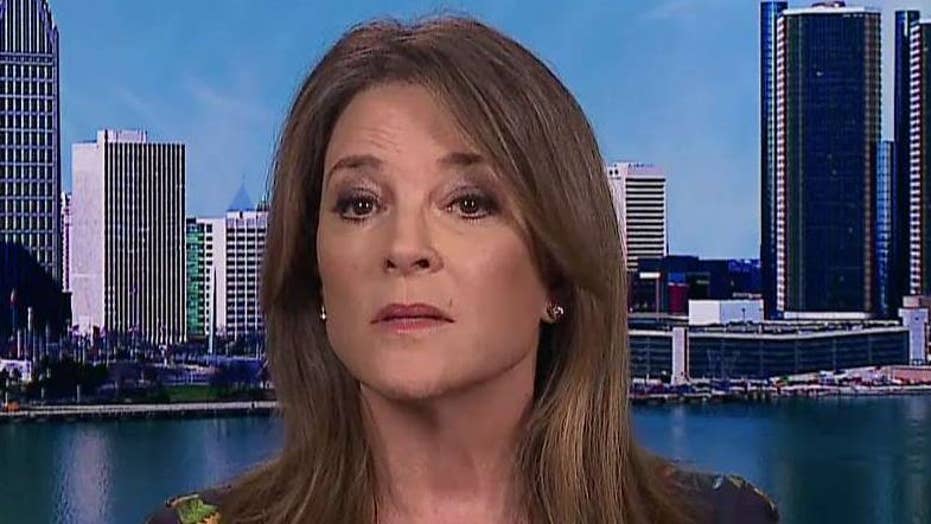 It wasn’t the debate result many in the media wanted. Author Marianne Williamson was the surprise star of a debate where she had very little time compared to her opponents – less than half that of the big-name candidates.

Williamson’s debate strategy was to push for “radical truth-telling.” This included a call for up to $500 billion in reparations for African-Americans and some tough talk about the Flint, Michigan, water crisis that won her loud support in the Detroit audience.

New York Times reporter Katie Benner pointed out how Williamson used Flint “to tackle the issue of racism head on.”

Los Angeles Times National Correspondent Matt Pearce described Williamson as “often a much more skilled communicator than most of the other politicians on the stage.”

Williamson scored big online as a result. She was only the top-searched candidate in two states before the debate, according to Google Trends. Afterward, she was the top Googled candidate in all but Montana. That’s about a 2,450 percent increase.

Williamson’s most memorable line of the night talked about the failure of “this wonkiness” to combat “this dark psychic force of the collectivized hatred that this president is bringing up in this country.” While the comment was mocked by some on Twitter, it also resonated.

Vanity Fair reporter Tina Nguyen joked: “Next debate: ‘Show of hands, who pledges on this stage to be against dark psychic forces.’”

New York Times columnist Ross Douthat criticized CNN’s handling of Williamson. “CNN obviously spooked by the ‘oops, we made Trump president’ experience into not giving Williamson the space and air she deserves,” he commented.

Comedian Sarah Silverman summed up a lot of the positive and negative comments at once, noting of Williamson: “She may be granola whacky but she’s right.”

Not everyone was happy about Williamson’s success. Vox Senior Correspondent Zack Beauchamp said she “is funny in isolation but when you think about it for more than two seconds her presence on this stage is genuinely disturbing.”

The Drudge Report ran it as “CLASH OF THE LIBS!” But unlike its major media competitors, Drudge also highlighted the rise of Williamson.

“WILLIAMSON WARNS OF 'DARK DAYS' FOR DEMS,” ran a Drudge headline. The site linked to two separate Williamson stories. And though it was a simple push poll, she also won the Drudge poll with 47 percent of online voters.

Liberals were particularly unhappy with how CNN handled the debate. And there was a lot of reason. The distribution of time was so biased as to be ridiculous.

Major media focused on the divide between the left and the far left in the debate, especially when it came to “Medicare-for-all” and so-called free college. The Washington Post led its site with a piece headlined “Liberal-moderate divide emerges on core issues.”

MSNBC “AM Joy” host Joy Reid declared “nobody really laid a glove on her” in discussing Warren.

MSNBC host Chris Matthews depicted it as the Sanders and Warren vs. everyone else. “The people on the left were like Butch Cassidy in ‘The Sundance Kid.’ I mean, Warren and Bernie were basically covering each other as they fought off everyone else. It was interesting to watch,” Matthews said.

Liberals were particularly unhappy with how CNN handled the debate. And there was a lot of reason. The distribution of time was so biased as to be ridiculous.

The New York Times tallied Warren having 18 minutes 33 seconds and Sanders close behind with 17:45. Compare that to Williamson, whose 8:52 edged out former Colorado Gov. John Hickenlooper’s 8:49 at the bottom.

It was reminiscent of concerns about the first two debates, where NBC broke its own rules to let Sen. Kamala Harris of California attack former Vice President Joe Biden over busing. Add to that controversy that at least 12 executives at either NBCUniversal or its parent company Comcast donated to the Harris campaign prior to the debate.

There was a great deal of online criticism about how much focus former Rep. John Delaney of Maryland received. Vox Senior Correspondent Matthew Yglesias argued that “these random nobodies” like Delaney were serving as proxies for Biden.

Jon Ralston, the editor of The Nevada Independent, said: “Who had ‘John Delaney speaks more than most of the candidates’ in the pool?”

And MSNBC contributor Sam Seder asked: “Why is John Delaney getting any questions? This is absurd.”

But the result was also what many considered the line of the night from Warren responding to Delaney: “You know, I don't understand why anybody goes to all the trouble of running for president of the United States just to talk about what we really can't do and shouldn't fight for.”

Hackers even broke into Delaney’s Wikipedia profile afterward and declared him dead as of that moment, at Warren’s hands.

Time was part of another criticism. The evening began as the cross-talk debate. Moderator Jake Tapper fought repeatedly with desperate candidates who were trying to get their two cents in.

Sanders even called out Tapper at one point after a question about “whether the middle class should pay higher taxes in exchange for universal coverage and the elimination of insurance premiums.”

“Your question is a Republican talking point,” Sanders said to Tapper.

It was a foregone conclusion that CNN would help the debates take a left turn. This was evident when moderator Don Lemon asked Sen. Amy Klobuchar of Minnesota: “… what do you say to those Trump voters who prioritize the economy over the president's bigotry?”

The network included Lemon, who is both openly liberal and anti-Trump, as one of its debate moderators. Lemon has shown his biases so many times it’s almost hilarious. He has bashed Trump and his supporters, defended Antifa, and compared Trump to Adolf Hitler.

Lemon even admitted he doesn’t want “to be ‘fair and balanced.’”

“My thing is about accuracy and the truth,” Lemon told the Dallas Voice. “Just because someone has another point of view or opinion, I don’t believe in false fairness. I just believe in the truth.”

McClatchy said that CNN President Jeff Zucker “has a longstanding personal rule against supporting politicians” and “He’s broken it once – for Kamala Harris.” That was when Harris “ran to become the first woman of color to hold the office of California attorney general a decade ago.”

But there was more to it than that. The Associated Press reported that “CNN pledges not to ask questions that require a show of hands by the politicians or that confine all the contenders to a one-word ‘yes’ or ‘no’ answer.”

That strategy could have easily been used to get some of the candidates on the record on issues they dodged. But that would have hurt them, so it wasn’t done.