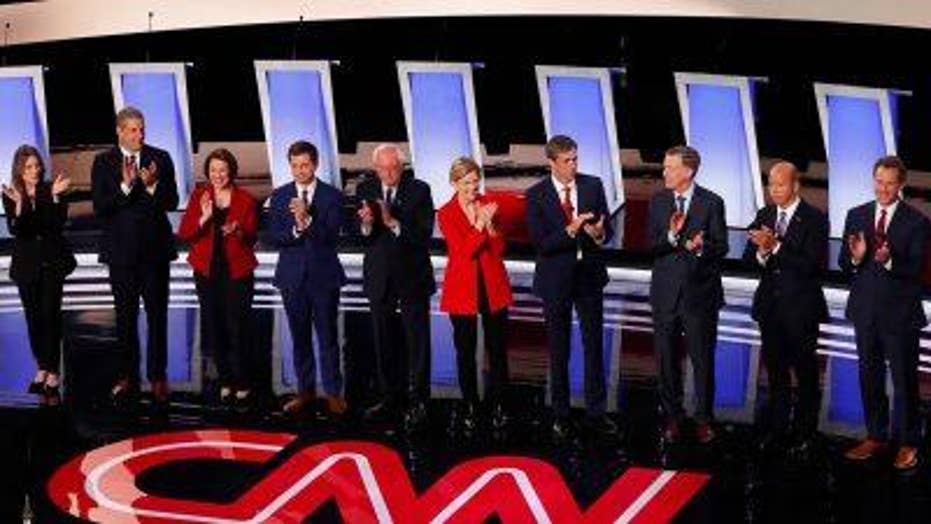 In the Democratic presidential candidates' debate in Detroit Tuesday night, the status quo held. Unlike Sen. Kamala Harris’ takedown of former Vice President Joe Biden in the first round of debates, there wasn’t a breakout moment that will change the long-term trajectory of the race.

Sen. Elizabeth Warren of Massachusetts was the winner.

Once again, the former Harvard professor flexed her debating bona fides. Agree with them or not, the crisp details of her policy proposals stood out in contrast with the vague prescriptions of others.

COLIN REED: ELIZABETH WARREN MAKES A FATEFUL CHOICE – WILL IT HELP HER BEAT BIDEN, HARRIS IN THE FINAL ROUND?

Warren delivered one of the more memorable lines when she swatted away criticisms from former Rep. John Delaney of Maryland by saying: “I don’t understand why anybody goes to all the trouble of running to be the president of the United States to talk about what we really can’t do and shouldn’t fight for.”

Just as importantly, no one else on the stage attempted to draw contrasts with Warren or highlight any of her vulnerabilities or scandals. But if Warren makes it to the general election, it’s a safe bet she won’t get a free ride from President Trump.

Heading into the evening, questions were swirling about whether Warren and Sen. Bernie Sanders of Vermont – two unapologetic far-left New Englanders – would seek to take the other down a peg.

The two have projected an outwardly friendly demeanor thus far, but both need the supporters of the other to win the Democratic presidential nomination.

Warren notably took a pass when offered the chance to explain the difference between what she called her capitalistic views versus the democratic socialism of Sanders. Make no mistake: these two will start slinging mud at each other in the months ahead.

It was a bad night for Bernie.

The cranky Vermonter seemed overcaffeinated and spent way too much time squabbling with the afterthought candidates.

In politics, you should always punch up, never down. Sanders violated this rule throughout. He attacked CNN (which broadcast the debate) and its advertisers, and even accused moderator Jake Tapper of peddling a “Republican talking point."

At one point, Sanders was lashing out at Rep. Tim Ryan and the congressman from Ohio replied: “You don’t have to yell.” The audience agreed.

The South Bend, Ind., mayor acted presidential throughout. Despite his age of only 37, he projected an “adult in the room” aura. Buttigieg swatted away silly gotcha questions and brought the fight back to President Trump.

By leaning into his youth, Buttigieg cleverly and subtly reminded viewers that he represents the next generation – a smart differentiator from the other candidates, all of who are older, including some in their 70s.

None of the so-called centrists had a moment.

In a primary full of big names who consume media attention, the undercard of candidates must maximize these debates to cut through the clutter.

By leaning into his youth, Buttigieg cleverly and subtly reminded viewers that he represents the next generation – a smart differentiator from the other candidates, all of who are older, including some in their 70s.

Instead, former Rep. John Delaney of Maryland, Ryan, former Gov. John Hickenlooper of Colorado, and Montana Gov. Steve Bullock spent their time with one-off attacks from the right against the progressive positions of Sanders and Warren.

The campaigns of these four candidates are on life support. By the time September’s debate in Houston rolls around, it could be curtains for all four.

Yes, the 44th president remains personally popular with primary voters, but they have moved on from his policy proposals.

The entire first hour of the Tuesday night debate was spent litigating health care and immigration – the former an issue Obama was supposed to fix with ObamaCare and the latter one that worsened during his eight years in office.

In fact, Jeh Johnson, Obama’s former Homeland Security secretary, has emerged as an outspoken opponent of the immigration policies championed by the majority of the Democratic field – especially decriminalizing illegal border crossings.

Some topics were conspicuous by their absence from the debate.

These included the possible impeachment of President Trump, Special Counsel Robert Mueller and Russia. These three subjects have been churned over endlessly and breathlessly by the mainstream media, but none got any airtime on stage.

Even in Michigan, one of the three “blue wall” states that put Trump in the White House, there was almost no introspection or real talk from the Democrats about why they lost in 2016, or how they plan to avoid the same fate in 2020.

Perhaps this is why President Trump is better positioned for reelection than most are willing to acknowledge.