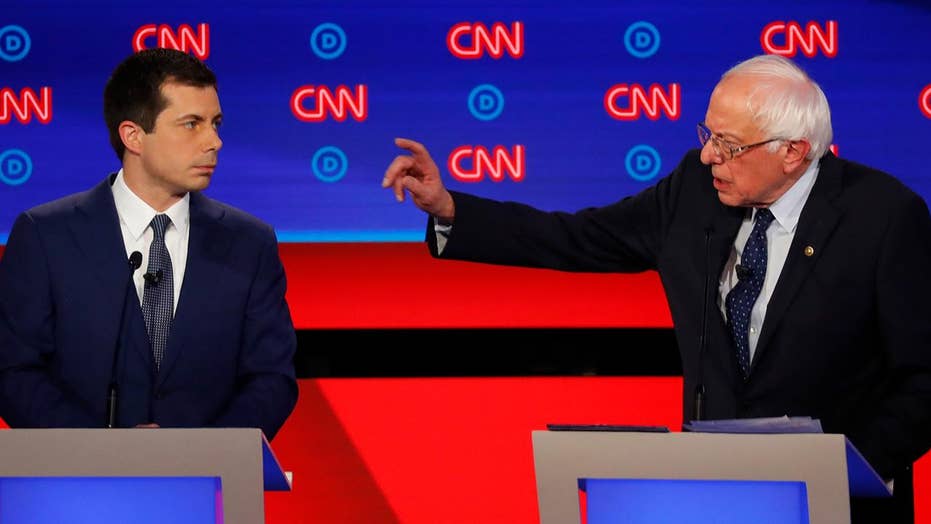 Sen. Elizabeth Warren of Massachusetts emerged as the clear winner in the Democratic presidential primary debate Tuesday night, as she and Sen. Bernie Sanders of Vermont battled for dominance in the far-left lane against eight more moderate candidates on stage.

Warren controlled the discussion on implementing a single-payer health care system and also was the foremost candidate advocating for decriminalizing illegal border crossings.

A clear divide emerged between Warren and Sanders on the far left and the more moderate candidates, with South Bend Indiana Mayor Pete Buttigieg and Sen. Amy Klobuchar of Minnesota standing out.

DOUG SCHOEN: PELOSI’S FEUD WITH OCASIO-CORTEZ SHOULD END WITH AN ULTIMATUM – WILL AOC MAKE THE SMART CHOICE?

This divide poses a grave danger for whoever emerges as the Democratic presidential nominee. Unless Democrats can unite and put aside their differences they will face extraordinary difficulties defeating President Trump in November 2020.

Former Rep. John Delaney of Maryland, a dark horse candidate rumored to be considering withdrawing from the presidential race, made a surprisingly strong showing, saying that radical ideas advanced by candidates on the extreme left were impractical and would alienate moderate voters, ensuring Trump’s reelection.

The moderates stressed that they were proposing practical solutions to the problems facing the nation that would attract more voters and that would stand a greater chance being approved in Congress.

But both Warren and Sanders said the more incremental solutions proposed by the other contenders were too weak to accomplish what was needed and would not generate the strong voter turnout needed to send President Trump into retirement.

The first issue that came up in the debate, which was broadcast by CNN, was health care. It created some of the most contentious exchanges of the night between “Medicare-for-all” advocates Sanders and Warren and the other more moderate contenders.

While the majority of the Democratic Party – much less independents and moderate Republicans – certainly does not agree today with the positions of Warren and Sanders, the two far-left candidates are hoping they can mobilize disaffected voters who want major changes, just as Trump mobilized millions of disaffected voters top gain their support in 2016.

Buttigieg was the only one candidate in the Tuesday debate who called for Democratic unity in any meaningful way.

While eclipsed by Warren, Sanders also delivered some powerful arguments that provoked cheers from an excited audience in Detroit. His most notable retort of the night came after a tense exchange with moderates on the stage who attacked “Medicare-for-all” as an unrealistic and impossible promise.

Rep. Tim Ryan of Ohio even accused Sanders of not knowing what impact such a bill would have on union workers.

Sanders fired back, saying: “I do know. I wrote the damn bill!”

Though many anticipated at least one contentious exchange between Warren and Sanders – who occupy very similar ideological positions and are neck-and-neck in most polls – the two refrained from direct attacks on each other.

Instead, Sanders and Warren focused their fire on their more moderate opponents and the very notion that Democrats need to emphasize moderate, innovative changes in order to defeat Trump.

“I get it there is a lot at stake and people are scared,” Warren said. “But we can’t choose a candidate we don’t believe in just because we are scared.”

There were only veiled attacks during the debate on the current frontrunner for the Democratic presidential nomination, former Vice President Joe Biden, who will debate nine other candidates Wednesday night. Biden maintains his strong lead for the nomination by 19 points, as reported in the latest Quinnipiac poll released earlier this week.

Buttigieg was the only one candidate in the Tuesday debate who called for Democratic unity in any meaningful way.

While Buttigieg’s performance was strong and his call for unity was meaningful, the civil war within the Democratic Party – the center-left and moderate candidates versus the progressive, far-left candidates – rages on. It continues to damage the party’s chances of beating Trump in 2020.

We can expect that this divide will only become more apparent in Wednesday night’s debate, during what will surely be a contentious battle between Sens. Kamala Harris of California and Cory Booker of New Jersey going after frontrunner Biden.