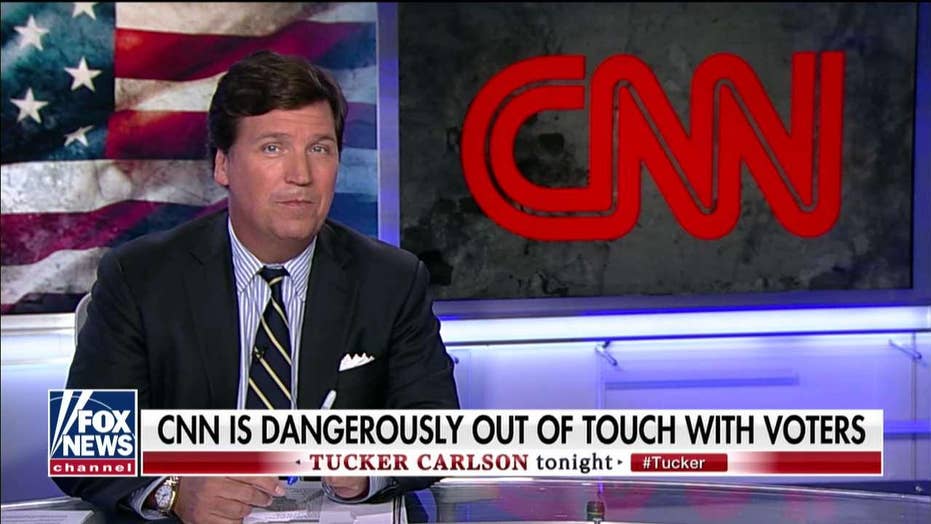 Tucker: This is what happens when you let CNN run your political party

The biggest turkeys this week weren’t the ones involved in the annual presidential pardon. These had everything to do with media bias that doesn’t stop even for a national holiday where we all give thanks.

Start with impeachment because, let’s be honest, the press never ends with it. Over at CNN, it was a veritable cornucopia of impeachment insanity.

One CNN Opinion tweet even claimed that “Americans sit glued” to the hearings. That tweet was dated Thanksgiving Day, when families gathered to celebrate and many watched one or more of the three separate holiday NFL games.

CNN ANALYST: IMPEACHMENT POLLING IS A 'WARNING SIGN' FOR DEMOCRATS

But that was the spirit the press took into the holidays, with an endless surplus of blogs, podcasts, newsletters and a video series all devoted to impeaching President Trump – or at least profiting from the attempt.

CNN actually wanted you to dine with impeachment on your mind. The network produced a how-to guide for dinner table impeachment battles for those who can’t pass the potatoes without whining about Trump. "Get smart on impeachment before Thanksgiving dinner," readers were told.

That wasn’t enough. The massive list ends with a Never Trump argument for impeachment: “The President has invited foreign powers to interfere in the US presidential election,” it stated.  It added: “It is a crossroads for the American system of government as the President tries to change what's acceptable for US politicians.”

The CNN week began with the anti-Trump program "All the President's Lies." This from a network that has pushed the phony Russia collusion narrative so much that you’d think it was the missing Malaysian jetliner.

Only CNN did talk about Trump’s heart. A lot. CNN Chief Medical Correspondent Dr. Sanjay Gupta hammered home that Trump is “73 years old, has heart disease and is clinically obese,” showing the bedside manner of Dr. Jekyll’s counterpart, Mr. Hyde. The analysis Gupta wrote for CNN.com used the word “heart” seven times, including four mentions of “heart disease” and one noting Trump has a “high risk of heart attack.”

CNN didn’t stop there and went for a whole banquet of bias. CNN Editor-at-Large Chris Cillizza flipped the script a bit. He blamed the holidays for why people weren’t sitting glued to the impeachment hearings. “The average person is gearing up for Thanksgiving, looking ahead to Christmas,” he explained as the reason why support for impeachment hadn’t increased.

Anchor Chris Cuomo was almost giddy about the prospect of Trump’s impeachment. Cuomo said that “if he gets impeached, that is a permanent stain. It will be the first thing people will know about his presidency forever.” He was excited by the prospect that Trump’s “name will be glued to being impeached for eternity.”

Of course, CNN isn’t the only network that’s gone all in on impeachment. MSNBC did its part. It ran a pro-impeachment commercial, complete with a tinny version of “American the Beautiful” playing in the background.

The voiceover came from former Newsweek Editor-in-Chief John Meacham. He defended the impeachment hearings as “why we fought the Revolution.” As he spoke, images of the Founding Fathers and the White House were interspersed with pictures of impeached presidents, Washington crossing the Delaware and the Marines raising the flag on Iwo Jima.

“The framers designed the government for a moment like this,” Meacham said, leaving out how this impeachment was planned from Day One of the Trump presidency.

You can expect the unexpected in the news.

Newsweek political reporter Jessica Kwong wrote a story saying Thanksgiving would be no special day for President Trump. “As with any other day of the year, Trump will probably be tweeting, or expressing his opinions in another way,” she wrote in advance of the holiday.

Kwong turned out to be wildly wrong when news broke that Trump made a surprise Thanksgiving visit to U.S. troops in Afghanistan and also met with Afghan President Ashraf Ghani.

Kwong was caught in the firestorm that followed. First Son Donald Trump Jr. tweeted “Fake News Vs. Reality” with an image of the headline of her story paired with photos of the president with the troops. “Fake news gonna fake!” he wrote.

President Trump retweeted the story, saying “I thought Newsweek was out of business?”

Kwong called her error an “honest mistake” because she wrote “before knowing about the president’s surprise visit to Afghanistan.”

The Washington Examiner reported Saturday that Kwong has been fired.

“Newsweek investigated the failures that led to the publication of the inaccurate report that President Trump spent Thanksgiving tweeting and golfing rather than visiting troops in Afghanistan," a Newsweek representative told the Washington Examiner. "The story has been corrected, and the journalist responsible has been terminated. We will continue to review our processes and, if required, take further action.”

The Examiner reported: “Kwong told the Washington Examiner that she was assigned to write a story about what the president was doing on Thanksgiving a week in advance and filed it to her editors on Wednesday. Then, she explained that she sent a message to the editor on duty with the president's latest actions and the editor published the piece. That editor decided to have a reporter write a new story on Trump's surprise trip to Afghanistan, and neglected to update Kwong's original piece in a timely manner.”

Both ABC and NBC used the president going to war-torn Afghanistan as a time to serve up a fresh helping of bias. ABC’s Chief National Affairs Correspondent Tom Llamas went negative – on Thanksgiving. “The president's show of support comes as the recently fired Navy secretary had scathing words for the commander-in-chief,” Llamas told viewers.

The funniest moment of the holiday came when the ladies of “The View,” – one of the most shrill, hateful shows on TV – complained that “civility seems to have gone away.”

The show, which has been filled with hate for many years, decided to blame Trump. “I think that [civility] will come back when people believe in their government, when people believe that their president is acting for their own – for Americans,” said co-host Sunny Hostin.

Fellow co-host Joy Behar added, “Instead of himself!” to underscore the complaint.

We found the answer to how Bloomberg News would cover the news of its owner Michael Bloomberg running for president.

BOZELL AND GRAHAM: BLOOMBERG, 2020 AND THE CANDIDATE'S MASSIVE, CREDIBILITY-CRIPPLING CONFLICT OF INTEREST

So the news organization will now serve as both the marketing department and investigative arm of the moneybags candidate. The answer was so bad that many traditional journalists were angry about it.

Former Bloomberg News editors complained that made his newsroom effectively impotent. The campaign is violating one of the tenets of good journalism. The Society of Professional Journalists Code of Ethics states: “Journalists should: Avoid conflicts of interest, real or perceived.”