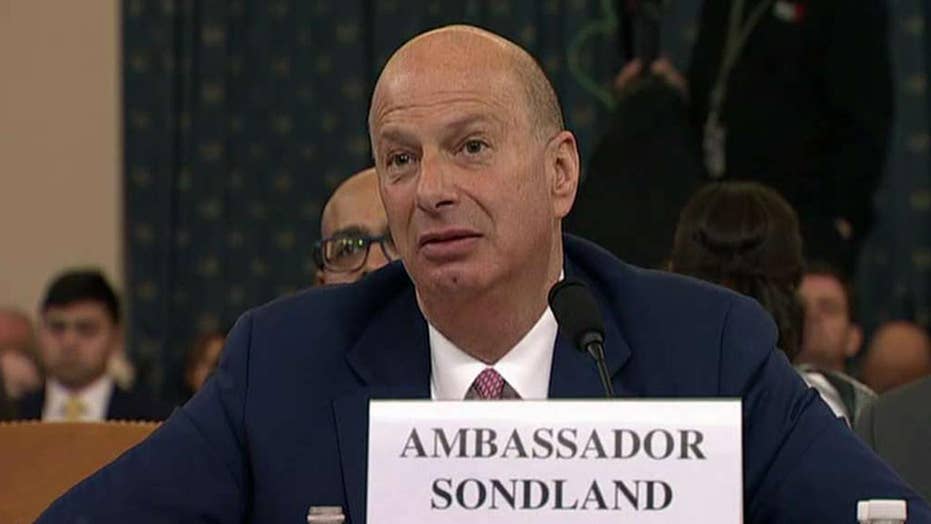 Did any impeachment witnesses offer proof that Trump committed a crime?

The news media were right about the impeachment hearings. They were a “bombshell” or even “explosive.”

Welcome to the “Media Metaphor Show” starring just about everyone in the press — CNN, MSNBC, PBS, The Washington Post, The New York Times, AP, Politico and pretty much every major media outlet in the Western world.

PAUL BATURA: IMPEACHMENT AND PAUL HARVEY – BROADCAST LEGEND MIGHT SAY THIS IS THE REST OF THE STORY

How else do you package a dull, wonky set of hearings that are so blatantly political that President Trump is rising in the polls as a result? Give it sound and fury.

News outlets did a bang-up job with booming terminology.

PBS “News Hour” anchor Judy Woodruff led off her telecast with, “U.S. Ambassador to the European Union Gordon Sondland delivers explosive testimony.” MSNBC’s Ari Melber stuck with the metaphor. “You had this explosive testimony today. You have Trump's million-dollar donor turned ambassador blowing the lids off everything and saying we do crime,” he told “The Beat with Ari Melber” viewers.

CNN “journalist” anchor Don Lemon mentioned the diplomat’s “explosive cell phone call” about Ukraine, which sounds painful. Journalists made so many “explosive” mentions that the news should have been sponsored by defense contractors.

Late-night “comedians” were just as bad. “Late Night with Seth Meyers” host Seth Meyers had a blast with metaphors, noting that,“This has been an explosive week of testimony in Washington” and how there was “one bombshell after another.”

It might seem just a standard joke, except it’s what the left and the media fear most of all — that voters realized the hearings were a dud. The most noise they could muster came from an embarrassing on-air moment featuring Rep. Eric Swalwell, D-Beano.

Potential voters were making noise, however, walking away from impeachment. Vanity Fair reported that “NEW POLLING SUGGESTS DEMOCRATS’ IMPEACHMENT PUSH COULD ALIENATE KEY VOTERS.” The Hill noted how a “Poll finds sharp swing in opposition to impeachment among independents.”

Imagine how voters will feel after months of this.

Those fears didn’t stop the press from acting like idiots. CNN anchor Chris Cuomo (he with the anger management issues) even called on his mommy. Trump had tweeted that others can’t overhear phone calls and dared someone to “Try it live!” Cuomo did, by calling his mom in front of a panel that tried not to laugh at him.

The result was a live TV lesson in why some segments should be taped. Cuomo jammed his phone in the face of chief political correspondent Dana Bash whose facial expressions made this must-watch TV. But the rest of the panel was stone quiet until CNN political commentator David Urban admitted; “I can't hear your mother, Chris.”

Nice metaphor for the voters and the media’s shrill impeachment antics. Unlike the CNN panel, voters don’t even care to listen.

Huge news broke last week courtesy of a U.N. report that got instant attention because it made President Trump look bad. According to the report, there are “more than 100,000 children in migration-related detention in the United States of America.”

Reuters, AP, NBC and other outlets raced to cover the crisis.

HuffPost senior politics reporter Jennifer Bendery was one of many to criticize the U.S. “Congratulations America,” she tweeted. “We now have the world's highest rate of children in detention, per a United Nations study.”

Only one small problem. The data from the report didn’t come from 2019. It came from 2015 when Barack Obama held the White House and 100,000 children were detained.

News outlets ran away from the story like it was radioactive. Agence France-Presse said it was “withdrawing this story.” Bendery pulled her tweet. Several outlets simply deleted their articles. A front-page story went away in a flash … simply because it no longer fit the anti-Trump narrative required of most big news stories. The misreporting led to some embarrassing moments as politicians used the story to attack Trump only to find they were attacking Obama.

Correction of the Week

Everyone makes mistakes. I’ve made my share. So have you. Journalism used to stem the tide of errors with brilliant, detail-oriented people called copy editors. Most of those jobs have been eliminated and journalism is worse for it.

Which takes us to GQ. The magazine theoretically for men had an epic fail last week. It ran a typically shrill leftist article bashing Republicans: “Alexander Vindman and a Brief History of the GOP Smearing Veterans.” But there was a bit of an error.

Here’s the correction they didn’t even label as a “correction.” “NOTE: This story has been updated. Alexander Vindman received a Purple Heart after being wounded by an IED, or improvised explosive device, not an IUD, or intrauterine device. We regret the error.”

The jokes write themselves. Think of this as more of that fact-based journalism we always hear about.

In the Great Depression, the catchphrase was “Brother, can you spare a dime?” The economy is doing well now, but not for journalists who have lost 28,000 jobs since 2008. Factor in inflation and one prominent journalist is calling for a $50 billion payday for the press.

HuffPost editor in chief Lydia Polgreen urged “every major corporation” to set aside a combined $50 billion for “high-quality news” instead of digital advertising on Facebook and Google. Polgreen’s apocalyptic manifesto warned, “The collapse of the information ecosystem poses profound risks for humanity.” Put more simply, “everyone is free to be their own propagandist.”

What she didn’t say is the anti-Trump media like HuffPost are a big cause of this problem. Journalists pick the stories, not readers. We get almost no news now that isn’t obsessed with taking down the president.

One reason “anyone is free to choose their own facts” is because the press spent decades ignoring stories that disagreed with their world view. And now that we have social media to compete with them, journalists like Polgreen want bailouts instead of earning that money with better journalism.