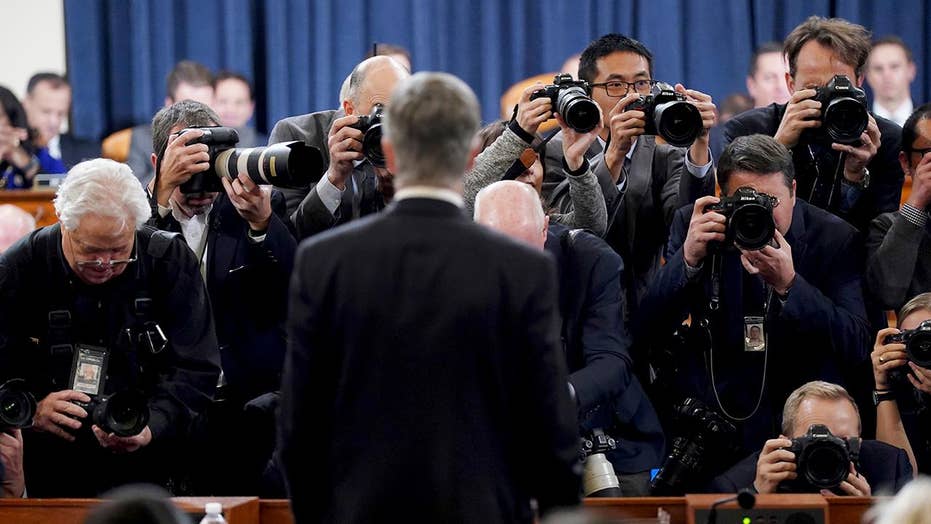 It was a tale of two worlds — inside and outside the Beltway. Impeachment was the biggest news in decades to those who work and live in the D.C. area. Especially journalists, who saw the hearings as their best chance to finally get revenge on a president they hate.

The rest of America had other things on its mind. That became painfully clear as the hearings geared up on Friday and the No. 1 trending topic on Twitter was not the hearings but a fight from the Cleveland Browns-Pittsburgh Steelers game the night before.

If you had asked Americans which video they remembered, the hearings or the game, it’s not even close. On one hand you had Rep. Adam Schiff, D-Arkham, obnoxiously silencing Rep. Elise Stefanik, R-N.Y. Stupid, but the stuff of grade-school bullies. On the other hand, you had Browns defensive end Myles Garrett ripping off the helmet of Steelers quarterback Mason Rudolph and smashing him with it.

BOZELL AND GRAHAM: ABC, CBS, NBC'S OUT OF CONTROL OBSESSION WITH TRUMP  — AMAZING RESULTS FROM OUR STUDY

If you guessed the NFL clip, you are correct. It was broadcast and analyzed almost as much as the Zapruder film.

Meanwhile, the press/left tried desperately to convince ordinary voters that these hearings were different than the three-year campaign they had led against President Trump. Skepticism was so commonplace that The New York Post ridiculed the hearings even before they began.

The paper was emblazoned with a huge word: “GUILTY” followed by “NOW FOR THE TRIAL…” The cover image was a collage of the Capitol, Schiff decked out as a circus ringleader, and House Speaker Nancy Pelosi wearing a clown wig and costume. The only thing missing was a gaggle of clowns representing the adoring press.

The Post wasn’t wrong. The broadcast evening newscasts on ABC, CBS and NBC had been especially vicious since the beginning of the impeachment inquiry in September. The “neutral” news media were 96 percent negative to Trump.

The Schiff-led hearings lived up (or down) to that preview. They gave journalists exactly what they wanted, a formal attack on the Trump presidency.

The news media moved on from parroting the term “quid pro quo” in regards to Ukraine and quickly embraced the new liberal term “bribery.”

Only it wasn’t necessarily what everyone else wanted. News outlets were angry that the right wasn’t excited by the result. The Daily Beast complained, “Trumpworld’s New Talking Point: The House Impeachment Hearings Are ‘Boring.’” Buzzfeed went with: “Republicans Got The Public Hearings They Wanted. Now They Say They’re Too Boring.” Even late-night comedians were frustrated that everyone found the hearings lacking “pizazz.”

Journalists were thrilled and toed the (Democrat) Party line with daily talking points. The news media moved on from parroting the term “quid pro quo” in regards to Ukraine and quickly embraced the new liberal term “bribery.”

According to Lexis-Nexis, CNN had used “quid pro quo” close to 700 times in just one month. But once pollsters realized it didn’t resonate, Pelosi adopted “bribery” and the media followed her lead. The broadcast networks deployed the new term at least 43 times in evening and morning shows in the next 24 hours.

There were two particularly notable moments in the hearing. Stefanik provided one, reminding viewers of the many times Schiff had told the media that he had a deal to have the alleged whistleblower testify. She cited repeated examples of his promises across media from USA Today, Vox, CNN, ABC News and more.

It was the kind of point the press should have been hammering home. But they acted more like lap dogs for the left than guard dogs for Constitution.

Apparently, you can’t have a kangaroo court if the defendant is allowed to respond.

The Future of Journalism

If the impeachment hearings make you despondent about the current state of journalism, this item will do the same for its future. A typical college scenario played out at Northwestern University last week, but with a new(s) twist.

Lefty students protested former Attorney General Jeff Sessions speaking at their university. The protest was filled with histrionic students shrieking, crying and cursing in an attempt to silence those they disagree with. The protest also included something new — anger at the campus press.

Student journalists from The Daily Northwestern covered the story and set in motion a fiasco. They dared to write about the protest, post photos from the public event and do that thing journalists do when covering events — reporting.

The snowflaky students didn’t like it one bit. And, rather than stand by the First Amendment and professional ethics, the student journalists folded like a cheap newspaper. They wrote a weak apology signed by eight editors, including the editor in chief and two separate editors who also hold the title “Diversity and Inclusion Chair.”

The apology was the ultimate safe space: “While our goal is to document history and spread information, nothing is more important than ensuring that our fellow students feel safe.” It went so far as to apologize even for texting students to ask for interviews.

This isn’t just any university. Northwestern is home to the Medill School of Journalism, one of the most well-known j-schools around. And, though the paper is independent of the school, the connection was obvious.

The result was a rare instance where many on the left and right united with the working press to condemn the apology. Washington Post Fact Checker Glenn Kessler called it “a travesty and an embarrassment.” He summed up the problem nicely, wondering, “How is it possible that a newspaper at what is allegedly a top journalism school would apologize for the basics of reporting?”

Medill Dean Charles Whitaker defended the paper’s right to cover news and said he was “deeply troubled by the vicious bullying and badgering” the staffers received for doing their jobs. He noted “the brutal onslaught of venom and hostility that has been directed their way on weaponized social media.”

This is how the safe-space generation expects journalists to report — what one respondent to the apology called “a cover-up, not coverage.” Come May, some of the protesters and some of these campus journalists will likely graduate into the real world.