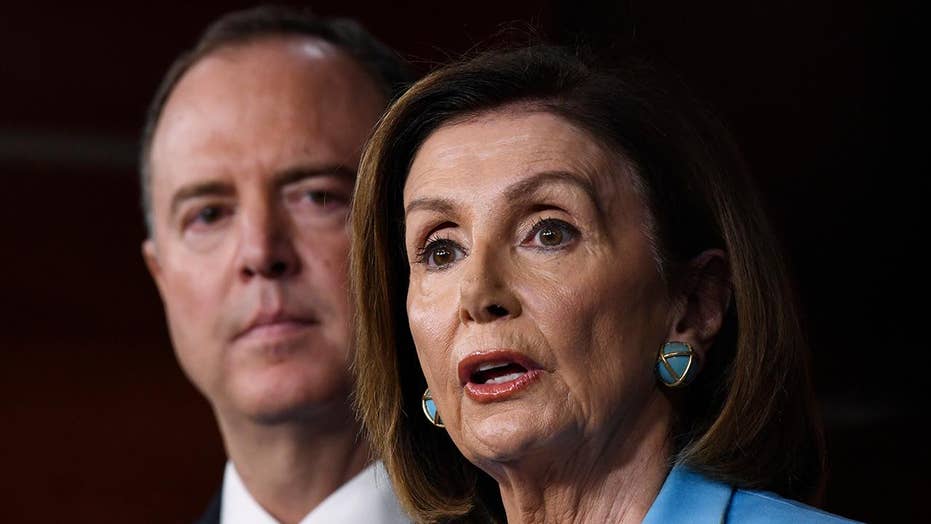 Pelosi: President Trump undermined our national security, his oath of office and integrity of our elections

Republicans regularly accuse Democrats in Congress of being interested in nothing except investigating and impeaching President Trump, while ignoring their responsibility to pass legislation to benefit the American people. Like a lot of Republican claims, this one has no basis in fact.

The truth is that Democrats in both the House and Senate can certainly walk and chew gum at the same time. The real obstructionists in Washington are Senate Majority leader Mitch McConnell and his fellow Republican senators, along with President Trump. They – not Democrats – are responsible for the gridlock in Washington.

On top of this, Trump’s outrageous and unprecedented conduct – with new revelations almost every day about something shocking he has done or allegedly done, and a steady stream of inflammatory tweets – dominates the news and squeezes out coverage of Democratic action on important legislation.

GREGG JARRETT: TRUMP DID NOT COMMIT AN IMPEACHABLE OFFENSE ON CALL WITH UKRAINE’S PRESIDENT – HERE’S WHY

Below are seven bills House Democrats have passed that having nothing to do with impeachment. Unfortunately, these and many other outstanding House bill have died in the Republican-controlled Senate. Democrats have even labeled the Senate “the graveyard” for legislation, and McConnell has become the chief gravedigger.

Here are some examples of needed beneficial legislation passed by Democrats (and some Republicans) in the House that McConnell has buried in the Senate:

HR1 – For the People Act

This bill would increase the protection of our elections from foreign interference – like the Russian interference that helped Donald Trump win the 2016 presidential election. Among other actions, it would mandate that states use paper ballots to help protect against foreign meddling. It would also require the Department of Homeland Security to evaluate threats to our election systems 180 days prior to elections and inform states of their conclusions.

Democrats have even labeled the Senate “the graveyard” for legislation, and McConnell has become the chief gravedigger.

This legislation would protect young immigrants who were brought to the United States illegally as children and grant them permanent residence with a pathway to citizenship. There are currently more than 2 million of these individuals, who have no legal or protected status.

This bill would expand background check requirements on private sales of guns, including those at gun shows, on the Internet or through classified ads. It would reduce the terrible toll gun deaths take in our country.

This would block the Trump administration from exiting the Obama-era Paris Climate Accords, an international agreement designed to combat climate change.

This reauthorizes a law to provide funding for programs that deal with domestic abuse. It includes an expansion of prohibition against firearm purchases for spouses or formerly married partners convicted of abuse or under a restraining order. A total of 33 Republicans crossed party lines to back the needed legislation, but the National Rifle Association has publicly come out against it.

When first lady Nancy Reagan launched a campaign in 1981 to try to get young people to refrain from using illegal drugs she adopted the slogan “Just Say No.” Mitch McConnell appears have adopted the same slogan to stop the Senate from even voting on legislation passed by the House and bills introduced by Democratic senators.

Regrettably, McConnell’s campaign is having a lot more success than Nancy Reagan’s. Yet in the height of hypocrisy, Republicans are accusing Democrats of being the do-nothing party.

The truth is that Democrats are listening to the American people and working to deal with the desire of most Americans to improve health care, create a sensible and compassionate immigration policy for our nation of immigrants, establish commonsense gun control measures that preserve Second Amendment rights, create a tax system that makes the wealthy pay their fair share, and more.

While Democrats do not all hold identical views, both centrist and more progressive Democrats share many common goals and principles, and are united in wanting to send Donald Trump into retirement from federal employment. We want a president in the White House who is more interested in enriching the lives of the American people rather than in enriching himself and his family.

Despite what you hear from President Trump and Republicans, most Democrats did not come to Congress wanting to impeach Trump. Sadly, the president has engaged in wrongful behavior that has made the impeachment inquiry begun last week essential. But impeachment isn’t keeping Congress from getting things done – Republican are.