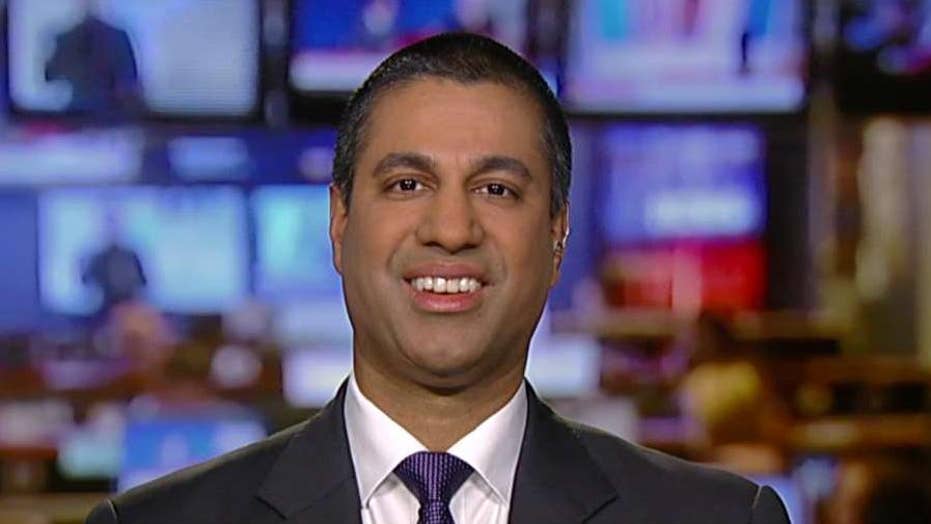 FCC chairman Ajit Pai talks ensuring America's leadership in the race for the next generation of wireless network.

America must win the race to develop 5G, the 5th Generation of wireless communications technology that will allow many more communications devices to transmit data at far higher speeds.

Both our economic health and national security demand that we remain the global leader and not a follower in tech innovation.

With 5G we will be able to browse the Internet, upload and download videos, and use data-intensive apps and features much more quickly and smoothly than we can today. The difference will be like going from a propeller-driven airplane built in the 1930s to one of today’s supersonic military jets.

We can’t afford to be stuck with yesterday’s technology while other nations are developing the technology of tomorrow. Developing 5G that serves the world will help the U.S. remain the world’s leading economy and a leader in innovation and job creation.

Other nations are challenging us for supremacy in 5G technology development.

China is making a strong effort to become the world leader in 5G in an effort to make the communications systems of other nations – including the U.S. – dependent on China and subject to Chinese control and surveillance. We can’t allow that to happen, because it would be a threat to our national security as well as our economic strength.

But how can America become the world leader in the development of 5G?

T-Mobile and Sprint argue that the best way to win the 5G race is for federal regulators to allow them to merge. The companies are asking the Federal Communications Commission to approve their $26 billion merger

With 5G we will be able to browse the Internet, upload and download videos, and use data-intensive apps and features much more quickly and smoothly than we can today. The difference will be like going from a propeller-driven airplane built in the 1930s to one of today’s supersonic military jets.

However, the Wall Street Journal recently reported that staffers in the Justice Department’s Antitrust Division are opposed to the merger as currently structured and gave that message to T-Mobile and Sprint. That’s a smart decision and one that will bring our country the greatest benefit.

Approving the T-Mobile merger with Sprint will not help us win the race to 5G, even though T-Mobile and Sprint are touting 5G as the main reason their merger should be approved.

The two companies claim that America needs their merger to win the 5G arms race. However, those same companies tell Wall Street that they are well positioned for 5G as standalone firms.

But the reality is that this merger will do nothing for 5G that T-Mobile and Sprint aren't already doing themselves. Neither company needs to merge to begin offering 5G.

President Trump and his administration are on the right track with this goal. We must get to 5G and rural broadband access through smart policy, not a harmful merger.

While the merger of T-Mobile and Sprint is not necessary for 5G, there is no question that President Trump was right when he said in announcing the rural infrastructure initiative that “the race to 5G is a race that America must win. It’s a race that we will win but we must not rest, the race is not over.”

To achieve this goal, the president took decisive action in developing a sustainable spectrum strategy for America’s future.

Aside from 5G, Sprint and T-Mobile also claim that their merger will create jobs and speed broadband deployment to rural America. They are wrong.

As I have written previously, this merger of the two companies will kill jobs, hurt rural America, and raise prices for consumers.

Combining T-Mobile and Sprint’s spectrum does little for rural America that T-Mobile can’t do as a standalone company, because Sprint’s midband spectrum is not well-suited to sparsely populated rural areas.

Moreover, combining the two companies will not change the high cost of building fiber backhaul to cell towers in rural areas. The best answer for rural America is what the Trump administration has proposed.

The White House is right to direct funds toward rural 5G infrastructure. High-profile Republican leaders have already voiced their support for the president’s plans.

Billions of dollars in infrastructure spending will only work if the wireless market remains competitive. For that reason, Republican leaders, Chairman Pai, and President Trump should reject the hype that, somehow, the merger of T-Mobile and Sprint will solve the rural wireless 5G access problem.

The White House should stick with the plans it has laid out for rural infrastructure investment and 5G. The United States can win the race to 5G without harming American workers, consumers and rural citizens.

The Trump administration should not fall prey to weak arguments meant to take advantage of America’s interest in securing a 5G future or to self-serving arguments.

Editor’s Note: In his work as a principal at The 1600 Group consultants, Bradley Blakeman’s past and current clients include the Communications Workers of America and DISH Network, both of which oppose the merger of Sprint and T-Mobile.