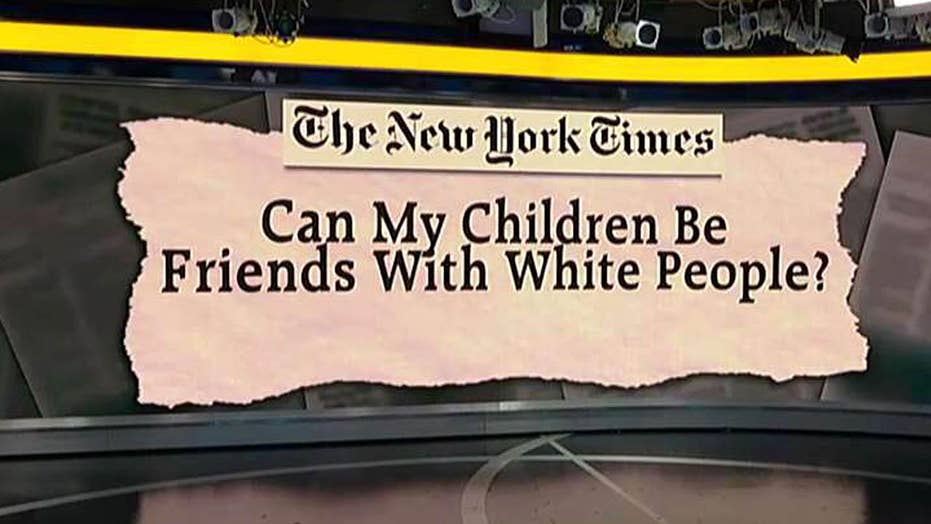 Op-ed asks if kids can befriend white people under Trump

The Sunday “New York Times” published an op-ed that’s causing a stir: “Can My Children Be Friends With White People?”

It’s by Ekow N. Yankah, a Professor of Law at Cardozo. He’s an African-American who’s got sons, the eldest a four-year-old.

According to Yankah, Donald Trump’s election means he’ll have to teach his sons that racism will continue to be a deep part of the American character, and that they’ll have to learn to be suspicious. “Much sooner than I thought I would, I will have to discuss with my boys whether they can truly be friends with white people.”

He goes on to explain that real friendship only happens where there’s trust, and no desire to wield power over the other.

While it may seem like Yankah is making an argument, what he’s doing is the opposite. He’s shutting off debate. He’s saying agree with me or be banished.

Surprisingly, Yankah claims his childhood in a “Midwestern college town [....] lacked the deep racial tension and mistrust that seem so hard to escape now.”

There’s tension today, yes, but there was tension a few decades ago when he was a kid — maybe he just didn’t notice.

How is it that the election of Trump, following Barack Obama’s two terms, was a turning point in race relations, even if it only supposedly revealed what was there all along? Nevertheless, with Trump if office, Yankah notes for many minorities “the ridiculous thing was thinking friendship was possible in the first place.”

According to Yankah, Trump’s essence is racist. For instance, when the President sees blacks protesting and he speaks out, it’s evidence that the President “cannot tolerate [that] the uppity do not stay in their place.”

But it’s more than Trump. It’s Trump’s supporters who have broken Yankah’s heart. (Though Yankah writes about white people, it should be noted almost 30 percent of Asians and Hispanics, and 8 percent of black people, voted for Trump. Also, millions of Obama voters pulled the lever for Trump.)

Yankah cannot excuse those who explain or apologize for what Trump says and does. The President’s designs are so obvious there can be no other interpretation.

While it may seem like Yankah is making an argument, what he’s doing is the opposite. He’s shutting off debate. He’s saying agree with me or be banished.

Not that he doesn’t feel bad about it: “I do not write this with liberal condescension or glee.  My heart is unbearably heavy when I assure you we cannot be friends.”

Heavy heart or not, this is a disastrous attitude, in politics or in friendship. When others disagree, you should first try to understand them, rather than simply condemn them. Certainly there’s a decent chance you don’t fully grasp what they’re saying. And maybe, just maybe, you’re the one who’s mistaken.

In trying to explain the violence earlier this year in Charlottesville, Yankah told his four-year-old “Some people hate others because they are different.” His son replied “But I’m not different.”

His son’s response gives me hope, a lot more than the counsel of despair that Yankah has to offer.

Because if the solution is to shutter friendships, where does that leave us?

He may even discover both Democrats and Republicans — all the way up to the president himself — want Americans of all races and ethnicities to do well.

Furthermore, maybe others will open up and understand him better, and the pain he feels when dealing with his children.

The country is having an argument right now, but it’s often not about the goal, but rather how to get there. And if you think the apologists for Trump are wrong, fine, try to explain to them why, rather than reading their minds and writing them off.

Anyway, that’s what a friend would do.