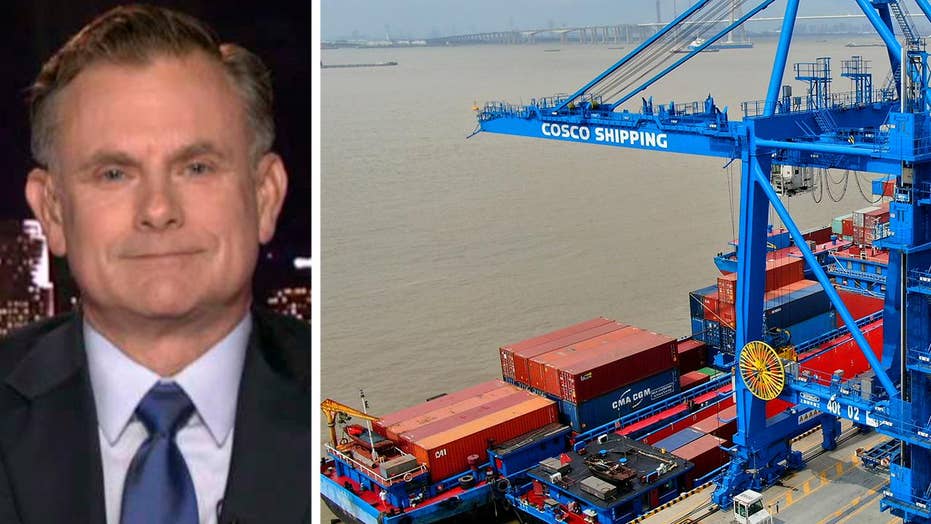 Beijing is trying to delay reaching a trade agreement with the U.S. until after the 2020 election, says Robert Spalding, author of 'Stealth War: How China Took Over While America's Elite Slept.'

It should come as no surprise that the president took this action to give the U.S. more leverage against our most powerful adversary. Trump has been warning China he would impose more tariffs as he tried to bend the iron will of the world’s worst trade cheater.

Trump’s warnings would be meaningless if he failed to follow through when China refused to make reasonable compromises to reach a trade deal. The new tariffs were predictable and are both measured and necessary.

TRUMP ANNOUNCES CHINA TARIFFS ON ANOTHER $300B WORTH OF GOODS

Trump could have imposed the new round of tariffs earlier, but he held off as a show of goodwill after a personal meeting with Chinese President Xi Jinping at the recent G-20 summit.

Unfortunately, China is once again failing to live up to the promises it made at the G-20 summit to purchase additional American agricultural products. So Trump is living up to his promise by going through with the tariff increase.

While he genuinely wants to reach a deal with Xi, Trump isn’t in any hurry. He knows that China responds to pressure – and only to pressure.

After all, Trump’s strategic counter-tariffs have already brought China to the negotiating table, despite the country’s obvious reluctance to change its trade policies.

While Trump is willing to sign a fair trade agreement with China, Beijing has been reluctant to end its corrupt and abusive trade practices, which have been hurting U.S. workers and businesses for decades.

Now China appears to be doing all it can to stall the bilateral negotiations in hopes that Trump will be defeated in his reelection bid next year and replaced by a Democrat who will employ less aggressive – and less effective – negotiating tactics.

The Chinese have certainly watched the recent Democratic presidential candidate debates and realize they would have an easier time preserving their unfair trading practices if a Democrat were in the White House.

South Bend, Ind., Mayor Pete Buttigieg argued in a debate that China’s “fundamental economic model isn’t going to change because of some tariffs.”

The Chinese have certainly watched the recent Democratic presidential candidate debates and realize they would have an easier time preserving their unfair trading practices if a Democrat were in the White House.

Sen. Michael Bennet of Colorado acknowledged that Trump has been right to “push back on China, but he’s done it in completely the wrong way.”

Businessman Andrew Yang argued that “tariffs and the trade war are just punishing businesses and producers and workers on both sides.”

Former Vice President Joe Biden, of course, harkens back to the Obama-Biden administration when President Barack Obama – unable to get China to cease its mercantilist trade policies – asked what “magic wand” presidential candidate Trump had to negotiate better trade deals.

There’s nothing magic about tariffs. The magic lies in having a president with the political courage to use them.

It’s hard to blame President Xi for holding out hope, no matter how forlorn, that one of the 20 Democrats on the debate stage this week will be sitting across the negotiating table from him in 2021.

But even assuming the increasingly unlikely scenario where China would face a new and less skilled or determined negotiator after the 2020 election, the question is whether it’s in China’s best interests to risk the wait.

Trump has made it clear that his stance will only harden after the election. At this point, it’s certainly obvious to the Chinese that he keeps his promises – even in the face of political risks.

While a bilateral trade deal with China remains the ultimate goal, America doesn’t need to rush into an unbalanced agreement just for the sake of ending trade tensions. We’re in a far stronger position to wait out this negotiation than China.

China’s economy is already slumping under the weight of the existing tariffs – a situation that the latest hike will surely exacerbate.

Here in the U.S. – despite claims that tariffs would end the current economic recovery and increase consumer costs – our economy remains the envy of the world. Inflation is in check, unemployment is near a half-century low, wages are surging and economic growth is continuing to beat expectations.

A skilled negotiator like President Trump knows that you should never rush into a deal, even if the political benefits are compelling. As a nation, we would eventually pay the price for a deal driven by politics rather than substance.

The president has made it clear that he wants a trade deal with China – but it has to be a fair deal. He tweeted: “We look forward to continuing our positive dialogue with China on a comprehensive Trade Deal, and feel that the future between our two countries will be a very bright one!”

Trump understands that surrender is not a winning negotiating strategy. So he’s not going to give in to unreasonable and unfair Chinese demands just to say he got a trade deal. As he has pointed out, a bad deal is worse than no deal at all.

The president’s strategy of effectively employing tariffs – despite criticism – has worked in the past and will work again. Earlier this summer, he successfully convinced Mexico to help the U.S. stop the flow of illegal immigration from Central America by threatening to implement a tariff on imports.

Trump has shown resolve tempered by restraint. He warned China that these tariffs were coming, he resisted the urge to raise them even further despite China’s pattern of deception, and he waited to implement them until it was absolutely necessary. But it was China who forced the imposition of additional tariffs by trying to renegotiate concessions it had made earlier.

The question is when China’s leaders will realize that it’s in their best interests, not to mention the best interests of the Chinese people, to make a deal now.