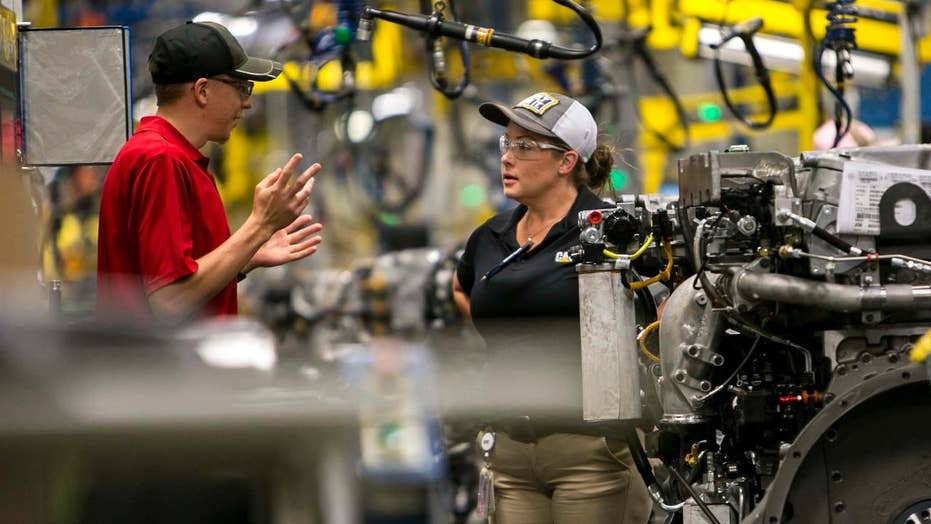 'Trumponomics' co-author Stephen Moore and Wells Fargo Securities Senior Economist Mark Vitner on the state of the economy and the outlook for Federal Reserve policy.

The good economic news is bad news for Democratic partisans, who are hoping and praying for a recession.  They know the better our economy performs, the worse the odds are that a Democrat will defeat President Trump in the 2020 election and the worse Democrats will do in House and Senate races.

The Commerce Department reported Friday that the U.S. gross domestic product grew at an annual rate of 2.1 percent in the second quarter of the year – significantly higher than the 1.8 percent most so-called experts had predicted.

GDP SLOWS IN SECOND QUARTER, BUT STRONGER THAN EXPECTED AT 2.1%

While fluctuations in quarterly GDP growth are normal, before the official data was even released liberal economists – many strongly opposed to President Trump – argued that their predictions proved the American economy is in the midst of rapid deceleration, heading towards a recession.

Unfortunately for the president’s political adversaries, that’s not happening.

Not only did the experts get their growth predictions wrong, but they utterly failed to recognize that other fundamental economic indicators also remain strong.

In the second quarter – which covers April, May and June – consumer spending rose by an impressive 4.3 percent. That’s an indication that President Trump’s historic tax cuts are succeeding by putting more disposable income in the wallets of American taxpayers and spurring rapid job creation.

Putting party ahead of country, the Democrats see the political damage a weak economy would inflict on President Trump as more important than the harm an economic decline would inflict on American workers.

Pundits, Wall Street analysts, and other so-called experts have been predicting a looming economic collapse for months, pouncing on whatever cherry-picked data they can find to prop up their flimsy case.

Some Democratic presidential candidates have joined in this recession watch party as well, warning that the booming Trump economy is on the verge of a crash. If their warnings get much stronger, they’ll sound like Chicken Little screaming that the sky falling. Actually, some already do.

Far-left Democratic presidential candidate and Big Government advocate Sen. Elizabeth Warren of Massachusetts continued her streak of erroneous economic predictions this week by publishing an opinion piece headlined “The Coming Economic Crash – And How to Stop It” on Medium.

Warren’s essay promoted – no surprise – massive and hugely expensive government programs. To be accurate, her piece should have been headlined “An Economic Crash – How to Create It,”

Desperate Democrats, thwarted in their attempts to impeach the president after the dismal performance of former Special Counsel Robert Mueller in his testimony before two House committees Wednesday, see negative economic results as their best opportunity to oust the president at the ballot box.

Putting party ahead of country, the Democrats see the political damage a weak economy would inflict on President Trump as more important than the harm an economic decline would inflict on American workers.

If a Democrat winds up in the Oval Office, you can count on him or her saddling workers and businesses with more job-killing regulations and high taxes like the ones that stifled our economy under President Barack Obama.

When businesses collectively must spend billions of dollars more to pay higher taxes and to comply with often unnecessary regulations, they have less money to expand, hire more workers, and increase the compensation of those workers. And when workers pay higher taxes, they have less money to spend. You don’t need to be an economist to understand this – you just have to know how to do arithmetic.

The apocalyptic fears – or, more accurately, hopes – of Democratic politicians for a recession are completely out of touch with reality. The Trump economy is working wonders for the American people, creating millions of new jobs and producing sustained growth that defies the global economic slowdown afflicting some of our main economic rivals.

In the second quarter, for instance, China reported its slowest growth rate since 1992. And the communist regime’s tendency to inflate its official economic data makes it likely that China’s growth was even lower than reported.

Europe, meanwhile, appears to be on the brink of another decade of stagnation. Thanks to President Trump’s visionary leadership, though, the U.S. economy has reached historic levels of prosperity despite the gloomy global outlook.

Regardless of the wishes of liberal pundits and Democratic politicians, the economic recovery conceived by President Trump isn’t showing any signs of ending. Just look at June’s jobs numbers.

June was the 16th consecutive month with the unemployment rate under 4 percent – the best streak in 50 years. More people are employed now than at any time in our nation’s history. And the number of people unemployed is under 6 million for the first time in 18 years – when there were 20 million fewer people in the workforce.

No wonder workers’ wages are surging, up 3.4 percent since last June – meaning a worker earning the average hourly wage and employed 40 hours per week experienced a $1,500 annual raise.

New trade deals are on the way – including a potentially historic agreement with China that promises incalculable benefits for American businesses, workers, and consumers. In addition, the United States, Mexico, and Canada free trade agreement is ready to go into effect, if Congress will approve it. Our national interest demands bipartisan support for this trade deal.

On top of this, the Federal Reserve is now on board with President Trump’s pro-growth agenda of low interest rates.

The sky is not falling on our economy, despite what the Democratic Chicken Littles say. The Trump boom is here to stay, despite the disingenuous efforts of liberals to convince us all to the contrary.

The only way the economic good news will end is if a Democrat winds up in the White House in 2021 and throws out the successful policies of President Trump and replaces them with the failed Big Government and high-tax policies of the past.