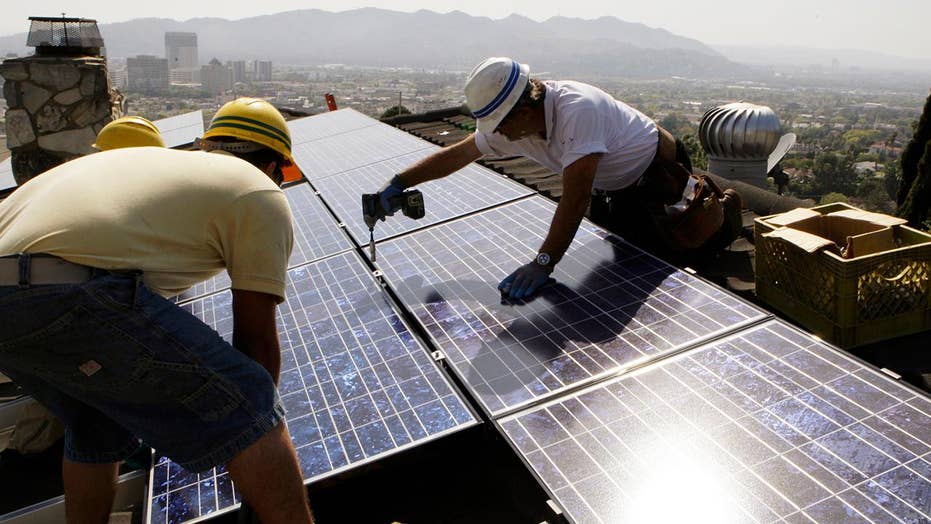 What is the left not telling you about the 'Green New Deal'?

Rep. Alexandria Ocasio-Cortez’s, D-N.Y., “Green New Deal” is the most radical and destructive policy proposal offered by a member of Congress in decades. Not only would it destroy roughly 3.4 million jobs related to the fossil fuel industry by eliminating nearly all fossil fuel use by 2030, it would also require “upgrades” to every home and business building in the country and the creation of single-payer health care, a “basic income” program, and a federal jobs guarantee, among many other left-wing policies.

With the backing of Ocasio-Cortez, what was once thought to be a fringe policy idea has gained significant momentum in recent months. At least 40 members of the House have said they support the Green New Deal, and eight likely Democratic presidential candidates have also said they support most or all of the plan, including Washington state Gov. Jay Inslee and Senators Cory Booker, D-N.J., Kamala Harris, D-Calif., Bernie Sanders, I-Vt., and Elizabeth Warren, D-Mass.

Although the Green New Deal has received huge amounts of media attention in recent weeks – both positive and negative – the radical origins of the plan have not. Ocasio-Cortez has been labeled an innovative thinker for offering the allegedly visionary Green New Deal, but the truth is that most of these ideas have been floating around socialist circles since at least the early 2000s, and there is strong evidence to suggest that much of the draft text of Ocasio-Cortez’s Green New Deal is merely a revised version of the “Leap Manifesto,” a socialist green-energy plan pushed by far-left environmentalists in Canada.

ALEXANDRIA OCASIO-CORTEZ, OTHER DEMS WANT YOU TO EMBRACE A SOCIALIST AGENDA – HERE ARE 4 GLARING EXAMPLES

The “Leap Manifesto” proposes making Canada 100 percent dependent on green energy by 2050, 20 years later than Ocasio-Cortez’s Green New Deal. It also calls for “a universal program to build and retrofit energy efficient housing” and huge new “green” public transportation projects. Like the Green New Deal, the “Leap Manifesto” encourages “a more localized and ecologically-based agricultural system,” and it proposes the creation of a “universal basic annual income” program. Also in line with the Green New Deal, it demands raising existing taxes and the creation of a carbon-dioxide tax.

The “Leap Manifesto,” which received significant media attention when it was introduced in 2015, was created by a large coalition of far-left organizations and activists in Canada, including Hollywood stars like Ellen Page, Rachel McAdams and Donald Sutherland. The plan was authored by a who’s who of Canadian “eco-socialists” and leftists, such as Naomi Klein – a noted critic of capitalism who once wrote that the only way to save the planet from climate change is “shredding the free-market ideology that has dominated the global economy for more than three decades.”

Ocasio-Cortez has been labeled an innovative thinker for offering the allegedly visionary Green New Deal, but the truth is that most of these ideas have been floating around socialist circles since at least the early 2000s, and there is strong evidence to suggest that much of the draft text of Ocasio-Cortez’s Green New Deal is merely a revised version of the “Leap Manifesto,” a socialist green-energy plan pushed by far-left environmentalists in Canada.

Some of the other radical people and organizations involved include the influential environmentalist David Suzuki – who has said on multiple occasions he believes political figures who deny the theory humans are causing catastrophic global warming should be thrown in jail – and 350.org, a left-wing environmental group founded by Bill McKibben.

McKibben is the author of “Maybe One: A Case for Smaller Families,” a book encouraging all people not to have more than one child because, according to McKibben, population growth is hurting the planet. In a lengthy 1998 article for The Atlantic, McKibben even went so far as to say it’s “bad news” the world’s population had grown to six billion.

Among the manifesto’s “initiating organizations” are numerous other far-left groups, such as Black Lives Matter–Toronto, Greenpeace Canada and Climate Justice. Socialist organizations endorsing the plan include ACORN, the International Socialists, Socialist Project, and the Socialist Caucus of Canada’s New Democratic Party, among dozens of others.

Ocasio-Cortez’s close relationship with the Sunrise Movement and Justice Democrats – organizations credited with helping Ocasio-Cortez create her draft proposal – is a direct connection to the socialist “Leap Manifesto.” Some of the leaders of the Sunrise Movement came from McKibben’s 350.org, and Justice Democrats is run by a former member of Bernie Sanders’ 2016 presidential campaign, which also included numerous advocates of the “Leap Manifesto” and McKibben’s many calls for banning fossil fuels.

Even Ocasio-Cortez’s branding of the Green New Deal as a kind of “Marshall Plan” that would be “similar in scale to the mobilization efforts seen in World War II” is eerily similar to an article McKibben authored for The New Republic in August 2016, titled "A World at War".

McKibben’s article is riddled with World War II comparisons. For example, McKibben wrote, “And just as FDR brought in experts from the private sector to plan for the defense build-out, she [Hillary Clinton] could get the blueprints for a full-scale climate mobilization in place even as she rallies the political will to make them plausible. Without the same urgency and foresight displayed by FDR—without immediate executive action—we will lose this war.”

Given Ocasio-Cortez’s direct connections to former members of McKibben’s 350.org and the Bernie Sanders presidential campaign, as well as the close similarities between the language of the Green New Deal and the policies proposed by key environmentalists involved with the “Leap Manifesto,” it seems very likely much of the Green New Deal is nothing more than a recycled version of a failed, three-year-old socialist proposal from Canada.

I guess Alexandria Ocasio-Cortez’s socialistic “Green New Deal” proposal isn’t quite as new or visionary as many think it is.