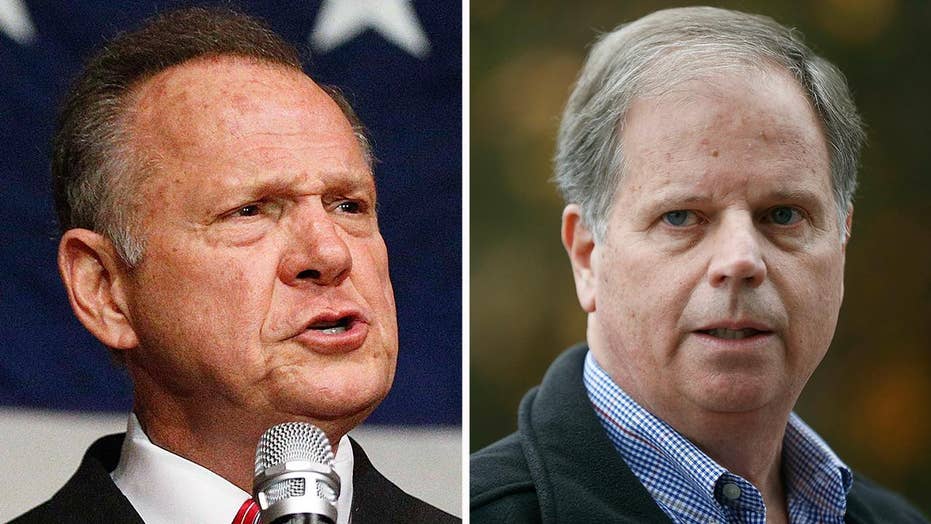 Alabama Senate race heats up ahead of the final weekend

Jonathan Serrie has the latest from the campaign trail.

Doug Jones, the Democratic nominee in Alabama’s senate race, is desperate for black votes. With support from key black lawmakers like New Jersey Senator Cory Booker and Georgia Representative John Lewis, the Jones campaign hopes black voters will come out in big numbers on Tuesday’s election. In fact, as many pundits have noted, his election victory will largely rely on their support.

Ostensibly, Jones holds a tremendous advantage to win the black vote. African-Americans, a quarter of the Alabama electorate, make up the majority of Democratic voters in the state. He himself prosecuted the KKK members who killed the four girls in the 1963 bombing of 16th street Baptist Church in Birmingham. And his opponent is an easy target. Roy Moore has not only been accused of sexual assault and pedophilia, but recently received blowback for his comments which critics say romanticized slavery.

Jones only has one small problem when it comes to the black vote: all he has to offer the black community is a tone-deaf flyer:

The flyer highlights Moore’s sexual abuse allegations and prominently displays a photo of a skeptical black man under the text "Think if a black man went after high school girls, anyone would try to make him a senator?"

Here’s the problem. The flyer is predicated upon two faulty assumptions about black voters. First, it assumes that black people only care about issues of race. In other words, a black person wouldn’t be as appalled at an accusation of pedophilia as a white person—unless the accusation is somehow linked to racism. I could be missing something, but even the greatest race-baiters in the country haven’t tried to make the Moore allegations a race issue.

Secondly, and most importantly, the flyer implies that black voters don’t care about issues facing their community. But black citizens, like all Americans, are interested in issues like the economy, education and a better future for their children. Jones either thinks blacks aren’t worthy of the same policy conversations as white voters or he has no policy prescriptions that would lead to better outcomes for them. Both ideas are troubling.

Even the far-left publication, The Root, raised issue with the flyer. In an op-ed, the author Michael Harriot rightly comments:

“On the rare occasions when the Democratic Party does address black voters, it only talks about the “black issues”: policing, mass incarceration, civil rights, etc. For the party leadership, black people aren’t whole people who have the same concerns about taxes, job creation, education initiatives, international policy and economics as other voters. They are simply bodies collected in the coffers of the party’s ineffective longing for power.”

Liberal politicians around the country should take note that black voters are catching on to their schemes.

White liberals employ the same strategy every election cycle. When they need votes (and only when they need votes), they return to the black community with the same lines about how their opponent is a closet racist. Then they give shallow promises that rarely ever make it to their legislative agenda. But if they can stoke enough fear and guarantee enough unicorns, then perhaps they can win the election.

However, with the outrage following Jones’ mailer and with early indications that black voters might stay at home on Tuesday, this strategy looks to be a failure in Alabama. And liberal politicians around the country should take note that black voters are catching on to their schemes.

To be fair, conservatives have their own issues talking to black voters. While I believe their policies are best-suited to lead to flourishing communities, they fail to effectively sell those policies to people who need them the most. As I have mentioned before, conservatives shouldn’t be afraid to present their case in places where they may be unpopular.

But for liberals, the issue is even worse because black Americans have consistently voted them into office with nothing in return. In fact, when questioned about the flyer controversy on the "Black Eagle" radio show on Sirius/XM on Friday, Doug Jones hardly cared:

He’s right. The mailer speaks for itself. The black community is worth about as much to progressives as a postage stamp.