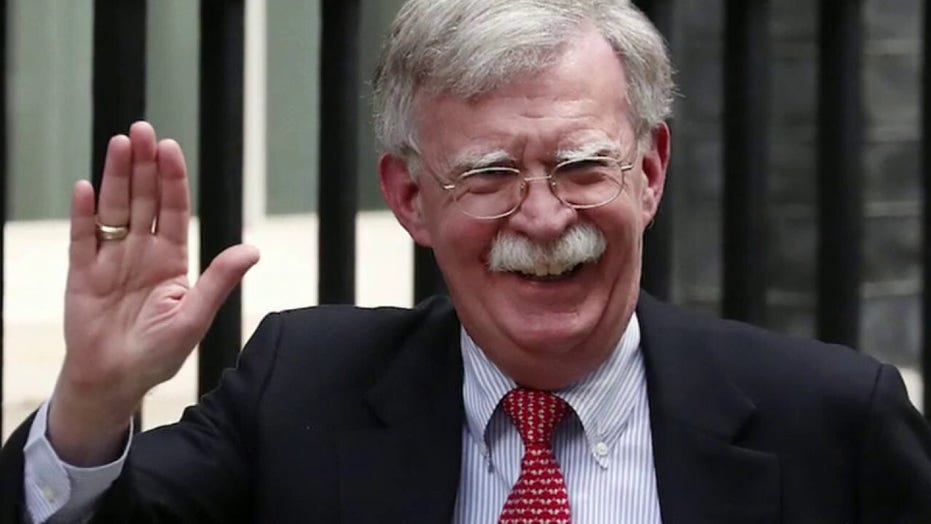 Can DOJ stop the sale of John Bolton's tell-all book?

President Trump may not be able to block John Bolton’s book, but he’s determined to blacken his reputation.

There was a telling exchange Wednesday on “America’s Newsroom,” when Rudy Giuliani denounced the former national security adviser.

Bolton had called the president’s personal lawyer a “hand grenade,” according to impeachment testimony, so Giuliani upped that a few degrees by labeling him “an atomic bomb.”

“The ridiculous statements that he sometimes made that we all kept our mouths shut about, and his desire for war, which is kind of sick,” the ex-mayor said.

Asked by Ed Henry why Bolton can’t just write what he saw, Rudy called him a “backstabber” who is “selling out to sell a book.”

While Trump’s Justice Department is now suing Bolton to block publication of the book, it’s clear from the lawsuit that there’s no expectation of success. So the strategy is to discredit the man who is about to unleash some serious allegations against his former boss.

That approach invariably raises the question of why Trump hired the former Fox News contributor in the first place. He joins a long list of ex-aides and confidants--Jim Mattis, Jeff Sessions, John Kelly, Rex Tillerson, Michael Cohen, Omarosa--who have been roundly denounced, in some cases after turning on the president.

Bolton is already feeling the sting of a backlash from liberals, who briefly celebrated him--after decades of denouncing him as a warmonger--when it seemed he might be a crucial impeachment witness. They say he refused to testify voluntarily when it could have helped the country--rather than waiting for a subpoena that never came--and instead saved his account for a big payday.

But the administration’s lawsuit will undoubtedly help him sell more copies. The book is already No. 1 on Amazon.

The New York Times, which obtained a copy yesterday, says Bolton argues that the House impeachment inquiry should have investigated more than just Ukraine:

“Mr. Bolton describes several episodes where the president expressed willingness to halt criminal investigations ‘to, in effect, give personal favors to dictators he liked,’ citing cases involving major firms in China and Turkey. ‘The pattern looked like obstruction of justice as a way of life, which we couldn’t accept,’ Mr. Bolton writes, adding that he reported his concerns to Attorney General William P. Barr.

He also says the president was “pleading with” Xi Jinping to buy a lot of American agricultural products “to help him win farm states.” That sounds closer to normal diplomatic horse-trading.

There is gossip as well: “During Mr. Trump’s 2018 meeting with North Korea’s leader, according to the book, Secretary of State Mike Pompeo slipped Mr. Bolton a note disparaging the president, saying, ‘He is so full of s--t.’”

On Ukraine, Bolton writes that Trump on Aug. 20 wasn’t in favor of sending any military aid “until all the Russia-investigation materials related to Clinton and Biden had been turned over,” and that he, Pompeo and Pentagon chief Mark Esper “tried eight to 10 times to get Mr. Trump to release the aid.”

The Washington Post, which also obtained a copy, reports that according to Bolton, Trump said at a meeting last year that "journalists should be jailed so they have to divulge their sources: 'These people should be executed. They are scumbags.'”

The fact that the suit names Bolton, but not his publisher Simon & Schuster, makes clear that Trump knows he can’t block a book that has already been shipped to the stores. Bolton has already taped his first interview, with ABC’s Martha Raddatz, to be aired Sunday. DOJ lawyers are well aware that the Supreme Court famously ruled against prior restraint--blocking publication--in the 1971 Pentagon Papers case involving the New York Times and Washington Post.

The suit does ask Bolton (“insofar as he has the authority to do so”) to get Simon & Schuster to pull back the book and destroy any public copies before next week’s publication. The publishing house called the lawsuit “nothing more than the latest in a long-running series of efforts by the administration to quash publication of a book it deems unflattering to the president.”

But Trump is trying to hit Bolton in the pocketbook by asking the courts to freeze any proceeds that he might receive from “The Room Where It Happened.”

At issue is a White House agreement that Bolton signed to submit any writings for a national security review. Bolton did that, and his lawyers say he removed some material deemed to be classified but the administration has been letting the process drag on for months. William Barr says Bolton doesn’t get to unilaterally decide when the review is over.

And the president signaled his intent to play hardball by telling reporters he hopes Bolton will be subjected to “criminal” penalties if the book is published without approval. That, to say the least, seems unlikely.

What matters, in the end, is what John Bolton has to say about Trump and Ukraine, Iran and  North Korea, and whether this is just a score-settling book or one that has evidence of questionable conduct by the man who hired him.