Impeachment push will unify GOP and push Trump over the top in 2020, says Sarah Sanders

Sarah Sanders said Democrats' efforts to impeach Trump will only bolster Republican unity and lead to his reelection in 2020, Thursday on "Fox &amp; Friends."&nbsp;

As Democrats gear up for an impeachment showdown with President Trump, former White House press secretary Sarah Sanders said Thursday their efforts will only bolster Republican unity and help his reelection in 2020.

"I think that it's one of the dumbest and most ridiculous political moves that we've seen in history," Sanders said on "Fox & Friends."

"I think this should be looked at as an in-kind contribution to the president's reelection campaign... All this is doing is helping fuel his campaign. They're raising more money. They're rallying his base and they're unifying the Republican Party... by attacking this president."

"It is absurd that they continue to go down this road and haven't learned anything new from it," she added. "I think the big loser in all this process has to be Joe Biden... So far the only inappropriate behavior that I'm seeing in this entire thing is that of Vice President Joe Biden, in order to help his son."

Sanders likened the recent impeachment push by Democrats to the Russia investigation and accused them of using a "fake scandal" to dupe American voters and regain executive power. 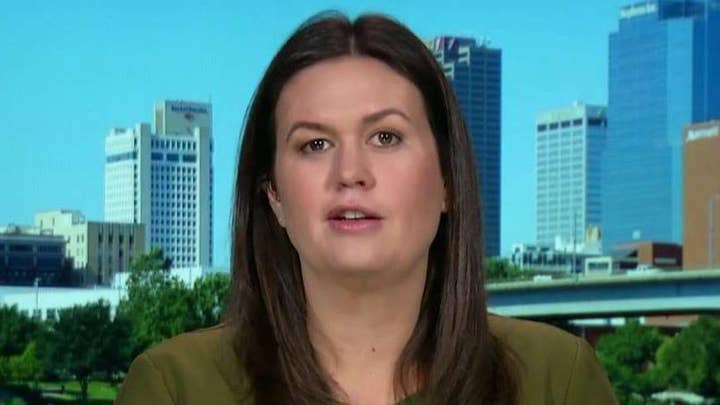 "The good thing is, the American voters are far too smart to fall for the Democrat lies," Sanders continued. "I think one of the best things that's coming out of this is the contrast of who is showing up to be fit to lead our country in a very trying time."

Sanders also said the Democratic Party has become so anti-Trump, they're willing to hurt the country if it means hurting the president.

"Time and time again the Democrats show their true colors. They don't care about the country," she added. "They care about tearing the president down. They've completely lost sight of what is important and are singularly focused on making sure they destroy the president and win reelection."

Sanders spoke shortly before the public release of a whistleblower complaint involving Trump asking the president of Ukraine to investigate Joe Biden and his son, Hunter. The complaint alleged that Trump used the "power of his office to solicit interference" from a foreign country in the 2020 election — and that White House officials subsequently tried to "lock down" records of that phone call.

"In the days following the phone call, I learned from multiple U.S. officials that senior White House officials had intervened to 'lock down' all records of the phone call, especially the official word-for-word transcript of the call that was produced – as is customary – by the White House Situation Room," the complaint says.