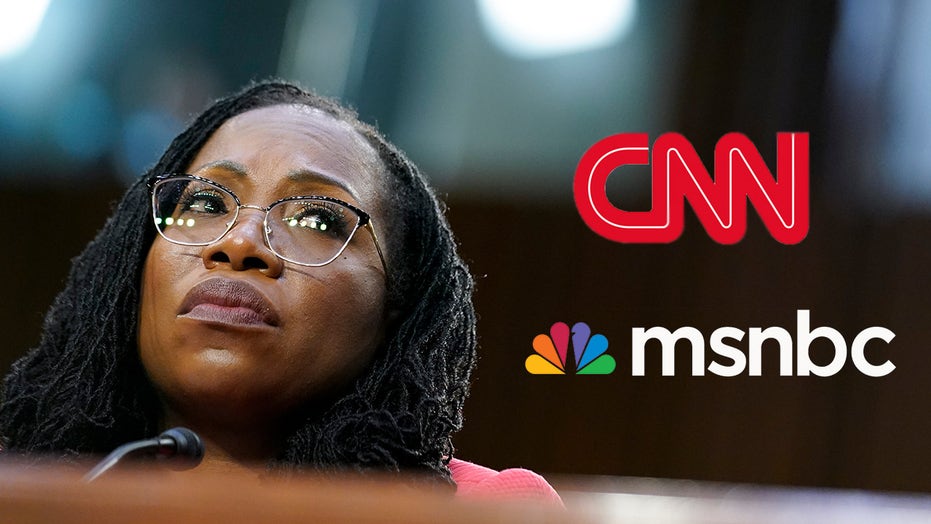 Prominent liberal media outlets ripped into Republican lawmakers, accusing them of racism, sexism, and playing into QAnon supporters beliefs during this week’s hearings for the Supreme Court nominee.

"This is about appealing to the QAnon audience, this cult that is a big presence in Republican Party politics now, that is – where Senator Hawley is trying to ingratiate himself with that group and run for president with their support," Toobin responded.

Senior correspondent Abby Phillip quickly concurred with Toobin, adding that Hawley was utilizing a "dog whistle to the kind of QAnon-right."

Several other hosts and guests across the liberal media also attempted to tie Republican lawmakers’ concerns about Jackson’s sentencing decisions on child pornography offenses to the far-right conspiracy theorists of QAnon.

On ABC’s "The View," co-host Sara Haines attempted to downplay Jackson’s record of sentencing sex offenders, arguing that there was debate on how to "fix" sex offender laws, which she boiled down to an example of a 17-year-old in a "consensual" relationship with an 18-year-old. She added that Hawley’s line of questioning played into QAnon conspiracies.

During an extensive monologue about Republicans and the Supreme Court, late- night host Jimmy Kimmel made a crude remark about Sen. Lindsey Graham involving child pornography.

He first played a remark by Graham in which he told Jackson that he had "no doubt" she found child pornography as "disgusting" as the rest of America.

"If you’re listening to my voice today as you’re on a computer looking at child pornography, and you get caught, I hope your sentence is enhanced because the computer and the internet is feeding the beast here," Graham added.

"Wait. What kind of — how sexually defective do you have to be listening to Lindsey Graham’s voice and watching child pornography at the same time?," Kimmel quipped as the video ended.

Meanwhile, MSNBC contributor Jason Johnson aggressively tore into Republicans, accusing them of smearing Jackson with QAnon conspiracies, expressing their "bigotry," and invoking racially charged language when he claimed lawmakers were engaging in "not a lynching" but a "flogging" of the Supreme Court nominee.

"So the only thing they can do now is publicly flog this intelligent, capable, qualified Black woman to the best of their ability with every single crazy QAnon conspiracy they can come up with," Johnson said. "They’re going to use it to express their bigotry about trans rights, they’re going to use her to express their bigotry in their QAnon conspiracies and their anti-Muslim sentiments."

MSNBC far-left host Joy Reid pushed her own conspiracy on Thursday when she claimed, without evidence, that Republican lawmakers wanted to "perform" for the QAnon "audience" at Jackson’s hearing in an effort to secure their votes for future elections.

"What I saw today was the performance of QAnon," she said.

Later in the segment, Reid told colleague Chris Hayes that "all [Republican lawmakers] want" is to "yell at a Black lady."

Reid, invoking a tweet that she had made earlier that day, said Thursday the treatment of Jackson by Republican lawmakers was "repugnant" and likened their lines of questioning to someone "following a Black shopper through the store."

Claims of racism aimed at the GOP did not end there.

In perhaps the most incendiary segment on Jackson’s hearing, MSNBC political strategist and commentator Chai Komanduri was so outraged by Cruz asking Jackson about critical race theory that he likened it to a "hate crime."

"[I]t's really ugly. Quite frankly, it looked like I saw Ted Cruz commit a hate crime, in that hearing room. It was McCarthyism at its worst," he said.

The next day on the channel, New York Magazine senior correspondent Irin Carmon called Cruz’s questioning a "really disgraceful display." She also claimed Republicans were attempting to "bait" Jackson into an emotional outburst, so they could peg her as an "angry Black woman."

ABC politics reporter Brittany Shepherd appeared to mirror Carmon’s comments that same day when she hypothesized that Republican lawmakers run the risk of "getting stereotyped" as a party pushing a "narrative of the angry Black woman."

Several other media personalities continued throughout the week to express contempt at Republican lawmakers and their treatment of Jackson.

"The View" co-hosts Sunny Hostin and Whoopi Goldberg both asserted that Republicans were attacking Jackson as a means to "air their grievances" about Democrats and prior Supreme Court nomination hearings. Goldberg earlier said that Republicans used their time at the hearing to "b----."

Following coverage of the hearings on CBS, Gayle King said it was "painful to watch" how Jackson was treated, and CNN’s Brianna Keilar said Republicans hijacked the hearing and asked "questionable questions" about the nominee. She later asked her guest whether Sen. Marsha Blackburn, R-Tenn., was racist and accused her of playing into "the worst of internet conspiracy theories."