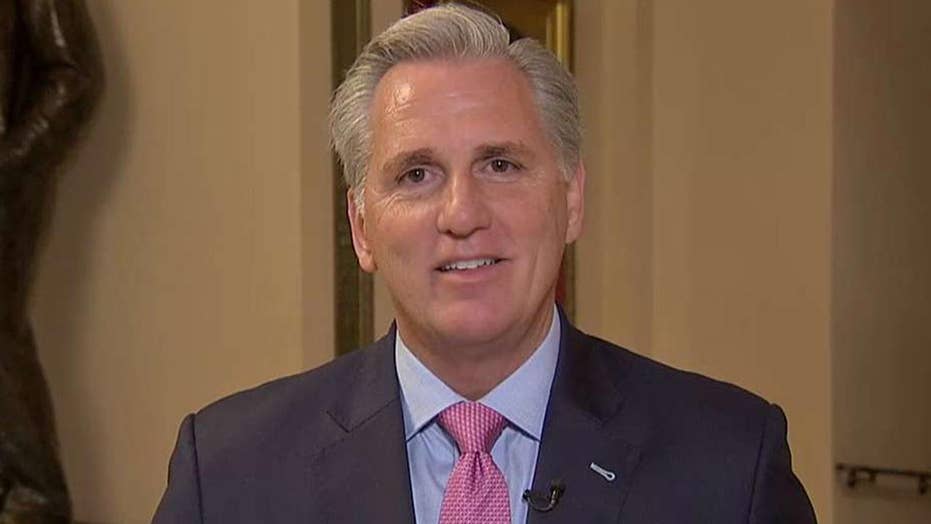 Rep. McCarthy on impeachment delay: Pelosi is realizing how weak her case is

House Minority Leader Kevin McCarthy reacted on “Fox & Friends” on Tuesday to the fact that House Speaker Nancy Pelosi continues to withhold articles of impeachment against President Trump from the Senate, saying she “knows how weak this case is.”

President Trump tweeted about MCCarthy’s “Fox & Friends” appearance on Tuesday writing, “Great interview with @GOPLeader Kevin McCarthy on @foxandfriends. ‘There was no urgency with the Articles of Impeachment because there was no case.’”

During the interview, McCarthy, R-Calif., also noted that Pelosi has proven that House Democrats are not "serious" about impeachment being an urgent matter.

“We know they’re just not serious. We know their case is not strong and now they want to change the rules," he said, referring to Senate Democrats demanding witnesses be called at a trial.

IMPEACHMENT IMPASSE DEEPENS AS MCCONNELL REJECTS PELOSI'S BID TO SHAPE TRIAL: 'THEIR TURN IS OVER'

McCarthy added, “It just shows they have nothing on their agenda. She [Pelosi] said she would change the agenda in 2020. No, we’re right back at impeachment one more time.”

Pelosi surprised many in Washington last month with her decision to withhold articles of impeachment  -- which accused Trump of abuse of power and obstruction of Congress over his dealings with Ukraine -- as she sought to pressure the Senate to agree to certain terms for a trial. In an unusual news conference, Pelosi, D-Calif., defended her decision while calling Senate Majority Leader Mitch McConnell, R-Ky., a “rogue leader.”

McConnell last month said Pelosi’s delay in sending articles of impeachment was an “absurd” position to take, saying the speaker “apparently believes she can tell us how to run the trial.” He also rejected calls from Democrats to subpoena new witnesses in a Senate trial of Trump.

“If America wants to continue just impeachment, keep them [Democrats] in the majority, but if you want to focus on something different, change the course of history and change who has the power in Washington,” he added.