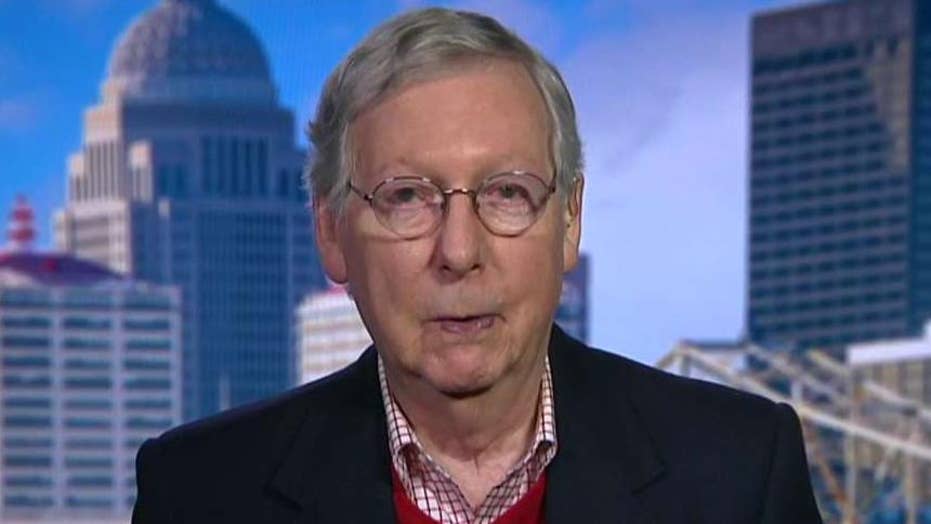 Senate Majority Leader Mitch McConnell, R-Ky., said  Monday that House Speaker Nancy Pelosi’s delay in sending articles of impeachment to the Senate is an “absurd” position to take, predicting she'll back down "sooner or later."

“She apparently believes she can tell us how to run the trial,” McConnell told “Fox & Friends,” arguing that transmitting articles of impeachment once adopted is mandated by the Constitution.

As he's said in recent days, McConnell described the current state of affairs on Capitol Hill as an "impasse."

"We can’t do anything until the speaker sends the papers over, so everybody enjoy the holidays," he quipped.

Pelosi stunned Washington last week with her decision to sit on the articles -- accusing Trump of abuse of power and obstruction of Congress for his dealings with Ukraine -- as she sought to pressure the Senate to agree to certain terms for a trial. In an unusual press conference last Thursday, Pelosi, D-Calif., defended her decision to hold off, calling McConnell a "rogue leader.”

She indicated the House would eventually send the articles over to the upper chamber but insisted it is up to the Senate to determine how the process develops going forward.

Pelosi has signaled that the House is waiting for the Senate to set out how Trump's trial will be conducted before they determine the next steps, such as designating impeachment managers.

Pelosi doubled down Monday morning, tweeting: "The House cannot choose our impeachment managers until we know what sort of trial the Senate will conduct. President Trump blocked his own witnesses and documents from the House, and from the American people, on phony complaints about the House process. What is his excuse now?"

McConnell has argued he only wants to stay consistent with the Clinton impeachment process.

“What I’ve been advocating to Senator [Chuck] Schumer is exactly the same way we handled the Clinton impeachment 20 years ago, which he [Schumer] voted for,” McConnell said.

McConnell went on to explain how the trial will be conducted: “You listen to the opening arguments, you have a written question period, and at that point, in the Clinton trial, we had a decision about which witnesses to call and, as you can imagine, that was a pretty partisan exercise, but we didn’t let the partisan part of it keep us from getting started so all I’m doing is saying what was good for President Clinton is good for President Trump.”