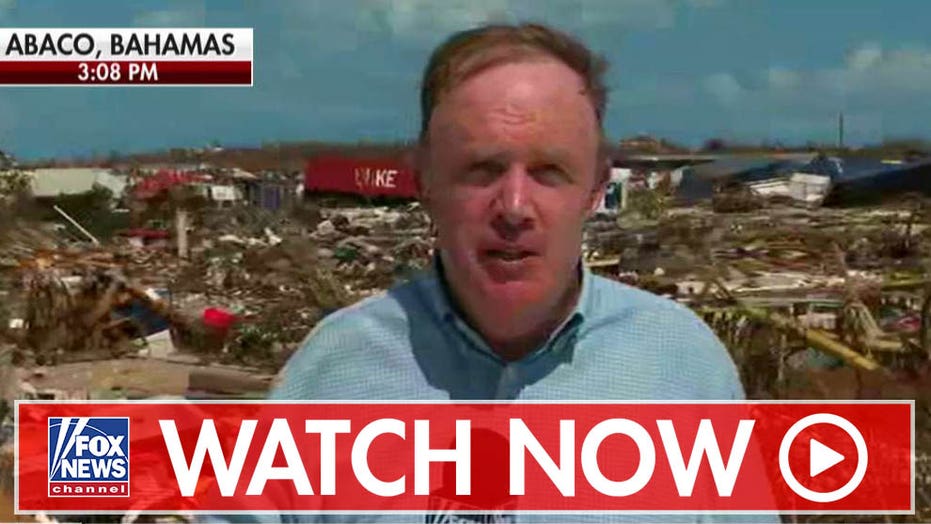 Just 180 miles off the coast of Palm Beach, Fla., Hurricane Dorian left Abaco Island in the Bahamas completely leveled and smelling of death, according to Fox News' Steve Harrigan.

Bodies of people and dogs lie strewn about -- including inside a church that was apparently used for shelter, Harrigan said Friday on "Shepard Smith Reporting."

"I'm standing in what used to be somebody's house here on Abaco Island -- just the foundation is left," the Miami-based Fox News correspondent said. "As far as I can see behind me, off to the right and off to the left, there is nothing left here."

Harrigan, who has reported from war zones and sites of other natural disasters, told host Shepard Smith the death and destruction he witnessed Friday rivals what he has experienced in the past.

"It's really like scenes out of 'Mad Max' here," he said.

"It's as if someone took a snow globe and just shook it over and over again."

He said it is obvious from where he stood that Dorian didn't just graze the northern Bahamas as many tropical systems do.

"It's the kind of hurricane that hit here with 185 mile-per-hour winds for two days," he said. "When you stand here, you can smell bodies. I can see dead dogs from where I'm standing."

Harrigan told Smith that just prior to coming on air, he walked over to a nearby Baptist church and witnessed more shocking scenes.

"There, you could actually see dead bodies protruding from the rocks -- bloating and bloody in the sun after several days here."

A glimpse of the destruction on Abaco Island, Bahamas.

He said the bodies were likely of locals who took refuge in the house of worship hoping to ride out the storm.

Harrigan added there is however a "flotilla" of sorts at a nearby port that has been taking survivors to safer ground.

Great Abaco sits 90 miles north of the Bahamian capital of Nassau and 93 miles east of the city of Freeport on Grand Bahama Island.