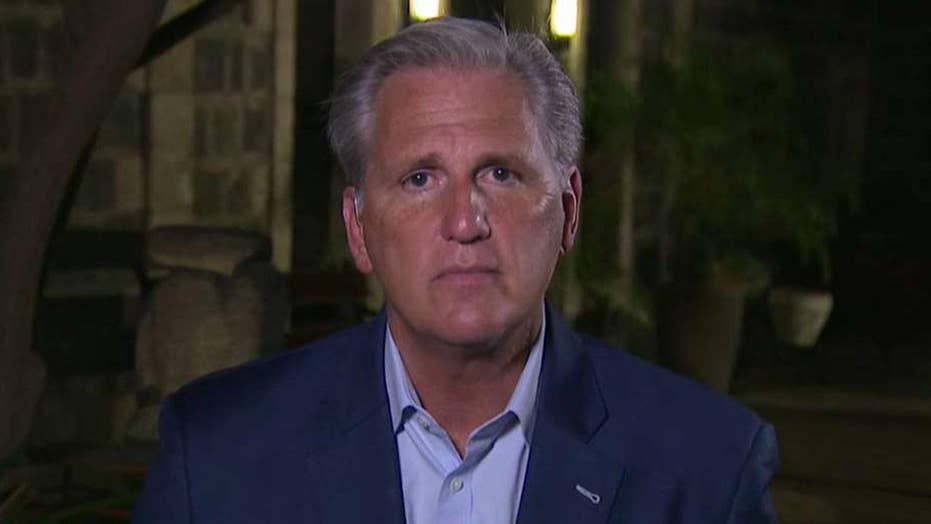 House Minority Leader Kevin McCarthy, R-Calif., appearing on "Special Report with Bret Baier" on Wednesday, explained his concerns about the Democrats moving away from Israel due to the influences of "new socialists," in particular the group of freshman House members known as "The Squad."

McCarthy, who is on a bipartisan study tour in Israel, criticized "the Squad," which comprises Reps. Alexandria Ocasio-Cortez, D-N.Y., Ilhan Omar, D-Minn., Rashida Tlaib, D-Mich., and Ayanna Pressley, D-Mass., for pushing Dems away from supporting Israel -- and for not taking part in the trip. Tlaib and Omar are expected to make their own trip to the region as soon as this Friday.

"They did not come on the trip with their colleagues. Secondly, if you look at the anti-Semitism that has been growing around the world, we haven’t seen something like this since the 1930s," McCarthy told Bret Baier.

The congressman noted House issues with anti-BDS (boycott, divestment and sanction) legislation that passed overwhelmingly in the Senate and was co-sponsored by Sen. Chuck Schumer, D-N.Y., as an example of Democrats moving away from supporting Israel. (The House did ultimately pass a resolution on the matter last month.)

"There’s a number of Democrats that still stand with Israel," he said. "But this new socialist Democrat group... has a much different belief."

McCarthy also responded to a report by Axios that President Trump told American advisers that Omar and Tlaib should be "barred" from going to Israel.

"I never heard the president say that to me.  But the one thing that should’ve happened, they should’ve come with their colleagues," McCarthy said. "They should’ve come together where they can have a meeting with Israel, with the Palestinian Authority, with those who were running against [Prime Minister Benjamin Netanyahu] at the same time.

"As long as you come with an open mind, open eyes and open ears, I think you have a responsibility to come here to have an understanding."