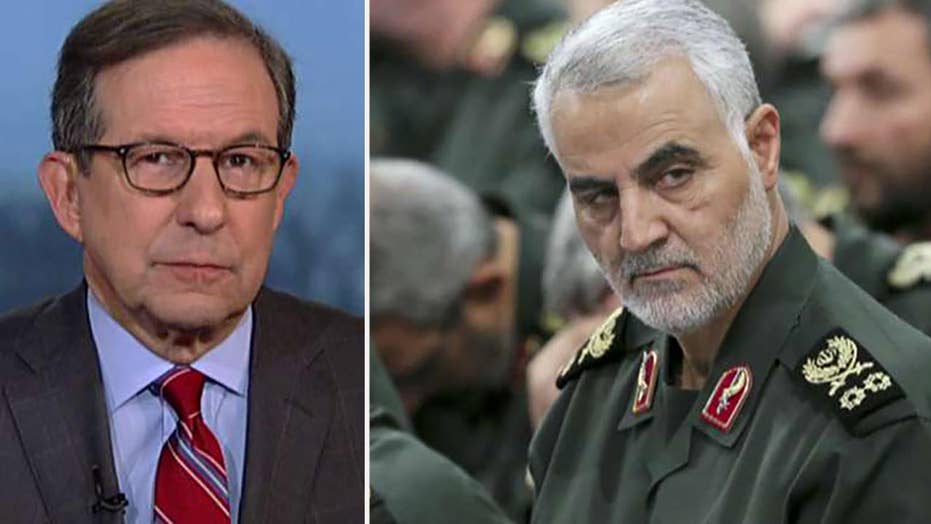 Chris Wallace: Bush, Obama didn't take out Soleimani out of concern over how Iran would respond

The question for the Trump administration is how far the United States wants to take the escalating conflict with the Iranian regime, "Fox News Sunday" host Chris Wallace said Friday.

Appearing on "America's Newsroom" with host Sandra Smith, Wallace said that while nobody would "shed a tear" about the death of Iranian General Qassem Soleimani -- the Ayatollah's righthand man -- what comes next "concerns some people."

Wallace told Smith that both President Barack Obama and President George W. Bush had the options, at various points, to "take out" Soleimani and that "they decided -- as much as they hated him -- not to do so because they were worried how the Iranians would respond to that.

"And, that's the concern," Wallace explained. "They talked about harsh retaliation: what form will that take?"

"Will there be military strikes? Will there be terror attacks? Iran has a very sophisticated cyber capability. Could there be cyber-attacks on the U.S. homeland?" he continued further.

"So, if this is the kind of strike that finally gets Tehran's attention, and they pulled back, well then that's a great masterstroke for the U.S. On the other hand, if they simply escalate -- respond to our escalation with another one of their own -- then people are going to have to decide how far we want to take this."

Officials told Fox News on Friday that 3,000 more U.S. troops would be deploying to the Middle East in the wake of Iranian President Hassan Rouhani's threat to respond to the airstrike with "harsh retaliation."

The 82nd Airborne Division's brigade -- put on alert Friday -- will be deploying to Kuwait and a battalion of some 750 paratroops were deployed this week.

Meanwhile, members of Congress remain divided on the issue -- with Republicans cheering the airstrike and Democrats rebuking the president's actions, saying they were unauthorized.

"All steps must now be taken to protect our forces against the almost inevitable escalation and increased risk," Rep. Adam Schiff. D-Calif., tweeted Thursday.

"This was a pre-emptive attack to let everyone know from North Korea, just anyone else, that if you come after Americans on President Trump’s watch — you do so at your peril,” Graham said.

But, at least one Republican, Sen. Rand Paul, R-Ky., sympathized with some of the concerns expressed by Democrats.

"If we are to go to war w/ Iran the Constitution dictates that we declare war. A war without a Congressional declaration is a recipe for feckless intermittent eruptions of violence w/ no clear mission for our soldiers," he wrote. "Our young men and women in the armed services deserve better."