New York City Mayor Bill de Blasio is putting police officers in danger with his far-left policies, according to Fox News contributor Dan Bongino, who appeared on "Fox & Friends" Monday and accused the 2020 Democratic presidential candidate of creating an "anti-cop" environment to bolster his own political career.

Bongino, who was an NYPD cop before joining the Secret Service, where he guarded presidents George W. Bush and Barack Obama, was responding to a story of three NYPD officers who were attacked by city residents on Friday and claimed the mayor's office has been the catalyst for an atmosphere of division.

"These stories make me sick," he said. "This disgusting, gross, unforgivable anti-cop atmosphere permeating down from the top of New York City is a danger to every cop out there. And what's even worse about it is the failed communist mayor of New York, de Blasio, he understands [it]. This is not a dumb guy."

DAN BONGINO CALLS OUT CONGRESS: THROW YOUR POLITICS 'IN THE GARBAGE' AND FIX THE BORDER CRISIS 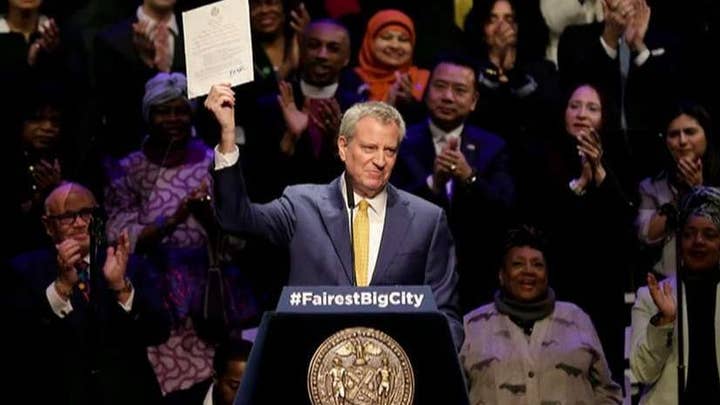 "He's not stupid," Bongino continued. "He understands that using the cops as a whipping boy is a political tactic for him to gain favor amongst his far-left base... With this de facto 'screw the cops' attitude... he's doing it strictly for his own political career."

Bongino said de Blasio's  alleged constant badgering of the police has affected morale within various departments and claimed several cops have spoken with him personally, to tell him how dissatisfied they are.

"SInce Mayor de Blasio [has been] in office, it's affected the psychology of the workforce," he said. "Imagine where we work if every time you came on the air, every single day someone told you... you're terrible... You're awful at this. Eventually, you go to work, you'll show up. You'll do what you have to do -- but you just can't stand it."

Bongino added, "We've seen what -- nine suicides of police officers this year? I'm not pinning those on de Blasio. I'm simply saying I know cops. I talk to them... They are miserable working for this mayor. They have no leadership at all."