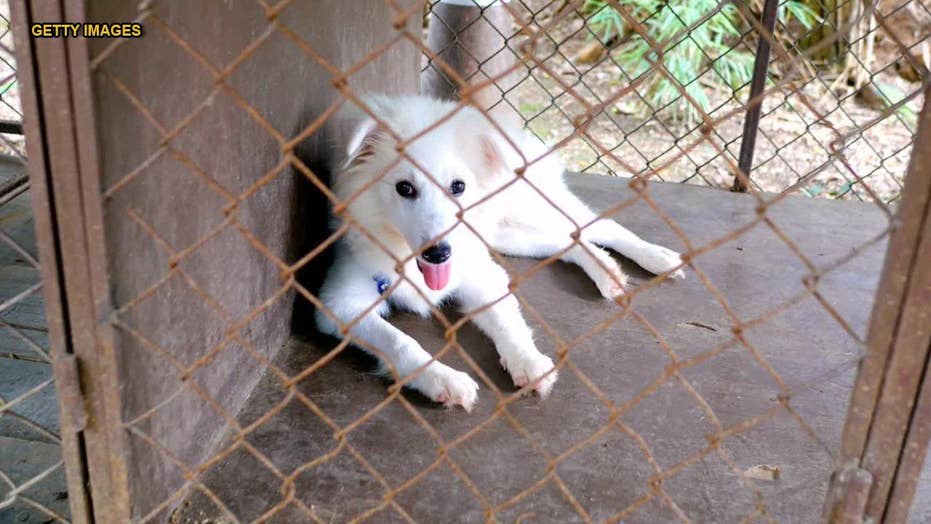 Dogs at a Florida shelter won't have to endure Fourth of July fireworks all alone.

Fireworks are a quintessential part of Independence Day festivities in America – but do you know why it’s popular to celebrate July 4 with a bang?

The vision for the tradition dates all the way back to 1776, when John Adams imagined that a sparkling sky would honor the soon-to-be independent 13 colonies each year in a July 3 letter to his wife, Abigail.

Fireworks explode over the Lincoln Memorial during the Fourth of July celebrations in Washington, DC, July 4, 2019.  (Andrew Caballero-Reynolds/AFP via Getty Images)

"I am apt to believe that it will be celebrated, by succeeding Generations, as the great anniversary Festival..." the future president wrote, per the National Archives. "It ought to be solemnized with Pomp and Parade, with Shews, Games, Sports, Guns, Bells, Bonfires and Illuminations from one End of this Continent to the other from this Time forward forever more."

A general overhead view of Coors Field as fans fill the outfield during a fireworks show after a game between the Colorado Rockies and the San Francisco Giants at Coors Field on July 4, 2018 in Denver, Colorado. (Dustin Bradford/Getty Images)

The Declaration of Independence was ultimately adopted by the Second Continental Congress the following day. While some public readings of the declaration were met with "impromptu celebrations" from local militia in Pennsylvania and New Jersey on July 8, a formal pyrotechnics display would not light up the sky for another year, according to History.com.

Patriotic revelry rocked the first organized Fourth of July celebrations in Philadelphia in 1777, and fireworks dramatically closed the evening.

"The evening was closed with the ringing of bells," the Pennsylvania Evening Post reported at the time, "and at night there was a grand exhibition of fireworks (which began and concluded with thirteen rockets) on the Commons, and the city was beautifully illuminated."

"Everything was conducted with the greatest order and decorum, and the face of joy and gladness was universal."

A view of fireworks over the Philadelphia Museum of the Art during Wawa Welcome America July 4th Concert at Benjamin Franklin Parkway on July 4, 2019 in Philadelphia, Pennsylvania.  (Gilbert Carrasquillo/Getty Images)

The city of Boston also set off fireworks on July 4, 1777, and the rest, as they say, is history.

Fireworks became available for sale to the public in 1783, Farmer’s Almanac reports, and the tradition has lived on ever since – in a grand way. According to the American Pyrotechnics Association, Americans spent over $1 billion on fireworks last year.