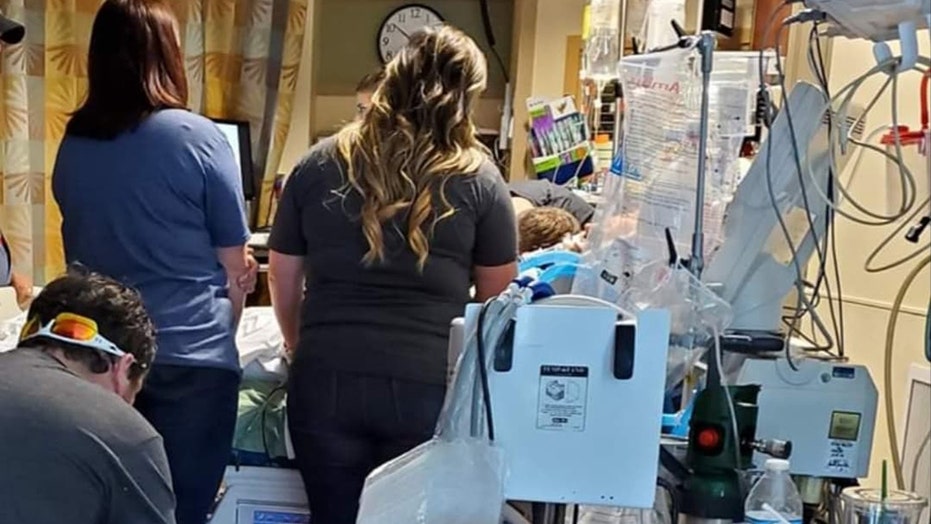 A family who lost a loved one to drug addiction six months ago is using their grief to spread awareness in a raw social media post that’s been shared and republished thousands of times.

Nichole Cicotte, who wrote the initial post and shared the moving photos of family members surrounding a hospital bed, told her followers that the man in the bed was her husband’s older brother.

Cicotte wrote the post alongside a photo of relatives surrounding her brother-in-law in the hospital. (Courtesy of Nichole Cicotte)

“This is addiction,” Cicotte, whose post was later republished on the blog “Love What Matters,” wrote on Dec. 6. “It’s a 3 am phone call that we knew was coming, but prayed it never would. It’s a doctor having to tell another family that their loved one is legally braindead. It’s a mother’s heart being ripped out from her chest. This is a room (and a whole hospital waiting room) full of brothers, sisters, nieces, nephews, cousins, aunts, uncles and friends beating themselves up that they didn’t do more to save you.”

“It’s a daughter and a son who have to figure this world out without their dad,” she wrote. “This is an empty chair at every family event. This is waking up on Monday morning feeling empty. Feeling angry, because how could you do this to us? Feeling sad because we know you fought so hard to recover. Feeling guilty because we wonder if we could of done more to save you. Feeling a sense of relief that you’re no longer battling your demons. Finding comfort in knowing the Caucasian john doe they have in the morgue isn’t you.”

“This is a man who loved with everything he had,” she wrote. “A man who valued family more than anything. A father who adored his children. A son, a brother, a goofy uncle, a friend to anyone who had the pleasure to know him. This is ‘just one more time’ ... ‘just a little hit’ ... ‘I know my tolerance’ ... This is 6 months without you and still not knowing how to process that you’re gone. This is addiction. Drugs don’t love you. Your family and friends do.”

MOM HEARTBROKEN BY DAUGHTER'S OVERDOSE DEATH WARNS IT COULD HAPPEN TO ANYBODY: LEXI WAS 'NOT A JUNKIE'

She updated the post to clarify that the man seated was her husband mourning the loss of his older brother. (Courtesy of Nichole Cicotte)

Cicotte also edited the post, which has been shared over 15,000 times, to include a link to a Facebook page that her mother-in-law started following her son’s death called “Parents of Children Who OD’d.” In a tribute to her son, the grieving mother wrote that she hoped the 35-year-old's story would “help someone seek sobriety,” and that it would be a sign that “our story has helped someone get sober and have a second chance, not everyone gets one…”

She also shared that he had died of a cocaine and fentanyl overdose, and had a long history struggling with substance abuse dating back to his teens.

In a follow-up post on her personal page, Cicotte said that she did receive a message from someone who had read her words and was checking into rehab.

“Hate the disease. Love the addict,” she wrote.