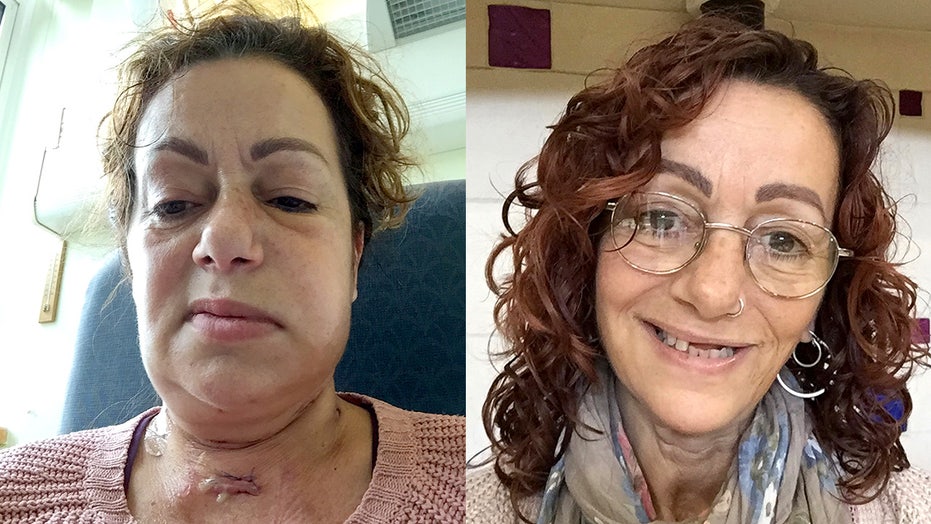 A woman in Dorset, England, went to the doctor for a sore in her mouth that wouldn’t heal, only to learn that it was cancer, and that she would need part of her jaw removed and reconstructed using a piece of her shoulder bone.

“I didn’t think the ulcer was anything at the time,” Ali Campbell, who is now cancer-free, told Caters News Agency. “It was just something that didn’t go away. I had tried all the normal creams and treatments and they hadn’t worked, so I thought I better consult the [doctor].”

She said that by the end of the next month, she had gone from not suspecting anything was amiss to waking up “with 48 staples from my left armpit down the side of my back, missing teeth and a full neck dissection.”

She faces several more procedures, including being fitted for teeth implants to replace the ones she lost as a result of the cancer.  (Mercury Press)

“That shocked me the most, I knew they were going to do it but I didn’t think it would take 48 staples to close up my back, I woke up looking like Frankenstein,” she said of the 2017 procedure. “I’m very self-conscious of my face. I don’t go out a lot because I get very anxious even if I’m meeting someone I know. I didn’t go anywhere for the best part of two years.”

Campbell said she was told that had she waited any longer to get the ulcer investigated, the aggressive cancer would’ve advanced from stage 1 to stage 4 in a matter of weeks, according to the DailyMail.

“I’ve got a long way to go with my journey but I’m getting there,” she said, according to the news outlet.

Campbell currently wears a splint in her mouth to support its structure while she awaits the next steps, which includes a bone graft from her hip to her jaw, and being fitted for teeth implants.

Doctors also hope to address the left side of her face, which drooped following the surgery, according to the DailyMail.