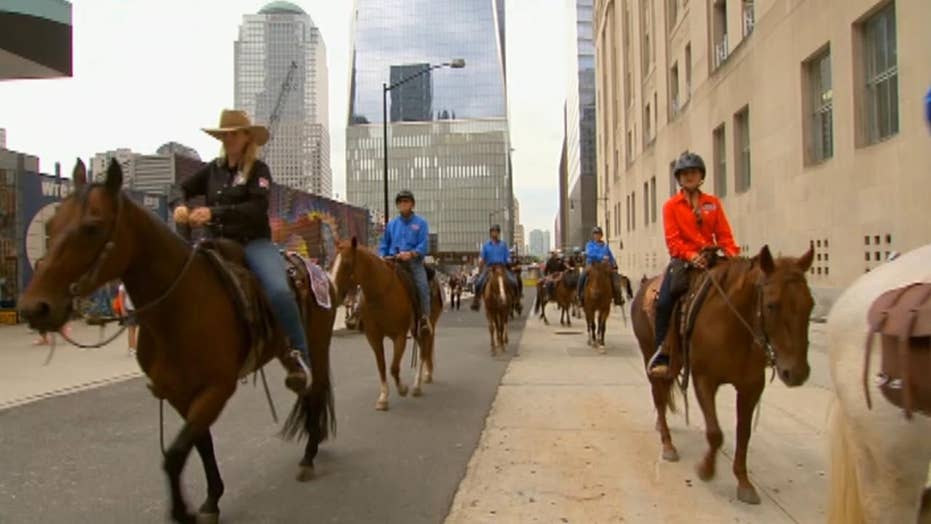 Military veterans and their family members mounted horses on Saturday for the second annual “Trail to Zero” ride through Manhattan in order to raise awareness for the high suicide rate in their community. The ride, which was sponsored by the nonprofit BraveHearts, also intended to teach veterans how to ride horses as a form of therapy.

“They feel what you’re feeling,” Jenny McDonald, an Iraq War veteran, told Fox 5 New York. “If you’re sad, they know it. If you’re anxious they get anxious. If you’re mad they want nothing to do with you.”

McDonald, who was one of the two dozen participants on Saturday, has suffered from anxiety since returning home, and said riding and teaching others how to ride has helped her find a reason to get out of bed.

BraveHearts began the "Trail to Zero" event in 2017 with just five veterans riding 20 miles to signify the average of 20 veterans who commit suicide each day. The first ride took about 7.5 hours, and has since grown in popularity.

Ken Boyd, a Gold Star father, was also on hand to ride. His only son, C.J., was killed in Afghanistan. He said he was encouraged to take up equine therapy after his wife went on a BraveHearts retreat for Gold Star mothers and saw how it helped her.

“When you become a Gold Star parent, it’s probably the darkest, deepest day of your life,” Boyd told WCBS News Radio. “It truly saved my life from suicide and other bad things that go on and happen,” he told the news outlet.

“We’re going to ride until it ends, until it’s zero,” Mitchell Reno, an Army veteran who credits riding horses with helping him to reconnect with his family, said.

Reno said the horses have helped him cope with depression, anxiety and his traumatic brain injury since returning from tours in Iraq and Afghanistan.

Equine therapy has grown in popularity over the years with both adults and children. Many programs offer sessions intended to help with depression, cognitive skills, addiction issues, anxiety or other developmental needs. Congress has also endorsed measures to increase funds for Equine Assisted Activites and Therapies.