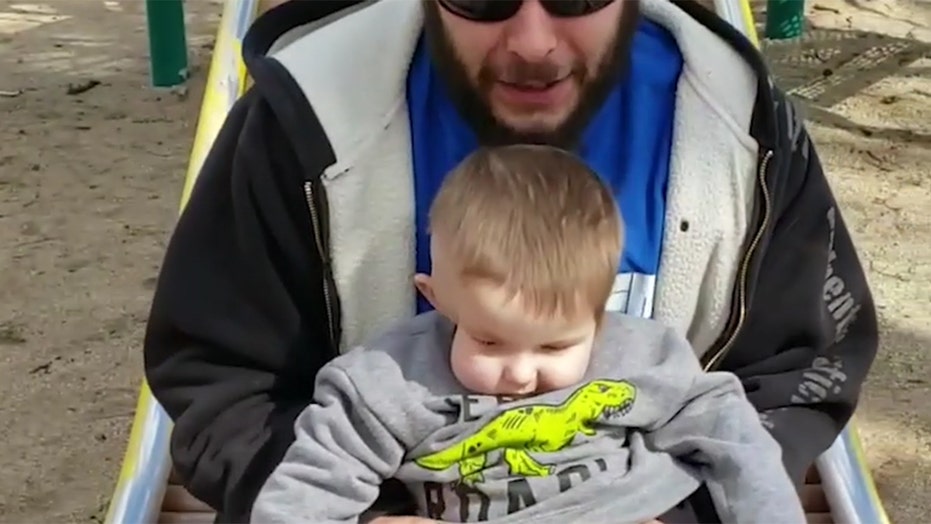 A toddler whose facial nerves were damaged during surgery to remove a huge tumor which doctors first believed was an ear infection is now cancer-free, just months after her parents were told she may not survive.

Fionah (corr) Raymond, 1, was just 7 months old when she was diagnosed with myoepithelial carcinoma, a rare malignant tumor originating in the salivary gland.

The baby’s frightening diagnosis came four months after her ear began to lightly bleed and produce discharge, which doctors attributed to a typical ear infection.

But the tot’s symptoms continued to worsen until an MRI revealed a mass lurking below her inner ear in September 2017.

In an operation to remove the mass that October, surgeons discovered the tumor had latched itself onto the baby’s jaw and skull bones and wrapped around her carotid artery. A biopsy revealed that Fionah’s tumor was cancerous and her parents Katherine and Zak Raymond were heartbroken when doctors said she might not see her first birthday.

Katherine Raymond said she and her husband began mourning their daughter while she was still alive after the initial prognosis.  (SWNS)

"Roller coaster is the best way to describe it," Katherine Raymond, 28, said. “The lead surgeon said they went into surgery thinking the mass was benign but knew instantly that it was cancer by the way it had attached to the surrounding tissue. They removed 80 percent of the tumor but it had grown so much, down her neck and around her carotid artery. They took as much as they could."

“They did another biopsy then and determined it was myoepithelial carcinoma, an extremely rare cancer that’s very serious," she said. "It’s extremely uncommon in children. When we were told about Fionah’s condition, doctors said it was very rare and she would be facing an uphill battle. They told us she would need chemo, radiation and more surgery. They told us she might not live to see her first birthday which devastated us."

“Essentially we were already mourning our daughter while she was still alive," she said. "My husband and I had to have the most difficult conversation of our lives. We asked ourselves if we even wanted to put our baby through the pain of treatment if her chances were so low.”

Katherine and Zak, 30, placed their trust in Lurie Children’s Hospital in Chicago, where doctors devised an individualized treatment protocol for Fionah.

ALEX TREBEK ON PANCREATIC CANCER DIAGNOSIS: 'THERE IS HOPE'

The baby, of Carpentersville, Illinois, underwent four rounds of chemotherapy and 40 rounds of targeted radiation to help shrink her tumor.

In surgery to remove the tumor in July 2017, Fionah’s doctors were forced to take out parts of her jaw and skull into which it had grown. Unfortunately, the baby’s facial nerve was severed in the surgery leaving her permanently unable to move the right side of her face.

"It was difficult to determine a treatment plan because most people who have this cancer are geriatric and Fionah was just a baby," Katherine Raymond said. "It is horrible to watch your baby go through chemo. Nothing prepares you for that. The radiation therapy leaves them with burns. She cried all the time. It was so hard on her."

"In surgery that July, they managed to remove most of the tumor and the treatment took care of the remaining cells," she said. "Unfortunately, they had to take segments of her jaw and skull and they damaged a nerve in her face that can never be repaired. She can’t really feel anything on that side. It affects her speech, it affects her eating. Her right eye doesn’t close. I have to shut it when she’s asleep."

Fionah underwent her last radiation treatment in November 2018 and is officially cancer-free but her parents worry that the tumor may return.

“It is something that could come back and that’s hard," she said. "It’s something I worry about. But we also feel blessed. Fionah is sassy and she knows what she wants. She is really loving and loves her teddy bears. She is a lot of fun to be around.”

Katherine Raymond, who is also mom to Caiden, 3, and stepmom to Lilly, 8, said she is excited to celebrate Fionah’s second birthday on May 15.

Her parents said they feel “blessed” to celebrate their daughter’s milestone, which they feared she’d never reach.

“We’re celebrating her second birthday next week and it is incredible," Katherine Raymond said. "We were told she might not be here to see her first birthday and to be able to celebrate her second makes us feel truly blessed.”